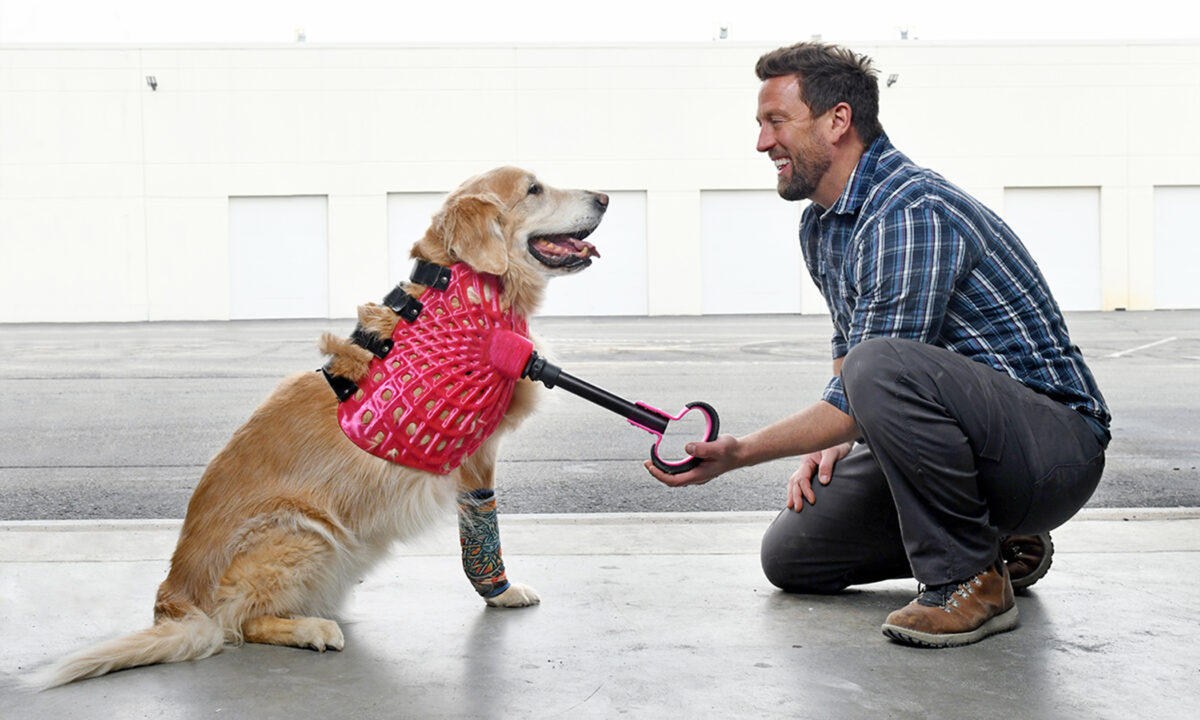 Meet this animal prosthetic expert from Virginia who is giving animals with limited mobility a second chance at life by creating custom artificial limbs—gifting them with the opportunity to walk again.

Through his organization, Bionic Pets, Derrick Campana, 43, has transformed the lives of close to 35,000 animals, including dogs, goats, cows, camels, raccoons, and elephants.

“Every animal deserves to walk and have a great life, just like people,” Campana, who stars in the TV series “The Wizard of Paws,” told The Epoch Times. “All these technologies, all these things that we have, animals should have.”

Campana’s mission to help animals in need started about 18 years ago. One day, an owner of a black Labrador dog came into his office, where he made prosthetics for humans, and said she needed a prosthesis for her dog, Charles. At that time, Campana wasn’t aware nor had he seen an animal in prosthetics, so he found it funny.

However, instead of giving up the idea completely, Campana took a week and built it from scratch.

“It took me quite a while to create my first device because it was very foreign to me, I didn’t know what I was doing,” he said. “Even though I had all the skills for making human prosthetics, it was a lot different.

“I kind of had to invent the whole process and figure out what would work well for an animal.”

Although it was something he hadn’t done before, fitting Charles with a prosthesis gave Campana immense joy, as it worked well on him.

After the success of the first device he created, Campana began to research more to see if anyone else in the world did this and found that no one else was making animal prosthetics at that time. Thus he began a business immediately, growing it to become a worldwide entity.

“Everything I learned on the human side, I wanted to introduce to the veterinary side, and it was just this completely open market,” he said. “I’m also an entrepreneur at heart, and I love building things with my hands.”

Realizing that he had a “knack for this,” Campana worked more with Charles’s owner, a veterinarian who comes across many dogs with injuries and thus sends these different cases to him.

Through this, Campana was able to slowly develop his skills. However, it wasn’t all that easy, and in some cases, he found it so hard that he had to make the device or prosthesis over and over again.

For instance, Campana recalled a dog named Evany that had a front leg amputation that was pretty high. With no prior experience in making a prosthetic like that, he tried about 8 to 10 times.

“When I finally got it to work, to stay on, and the dog was walking, I was so happy because I knew there are so many more dogs in the world that need that exact same type of treatment,” he said. “I realized that I just broadened my patient base.”

Having cracked the formula over all these years, Campana’s operation now runs as smoothly as it can. Everything is made on-site in Sterling, Virginia. Owners who live more locally bring their animals in to be cast, or if they are further afield, the company ships out a casting kit. A mold is then taken using instructional videos, or with the help of a veterinarian.

Campana, who loves using his hands, sculpts every single mold himself. The animals are either fitted with their prosthetics in the shop or it’s shipped across to them.

According to Campana, there’s a common misconception among people that prosthetics are for the rich. He stresses that the opposite is true.

“It can actually take the place of surgery and have animals heal in a different way without undergoing surgery or the knife,” he said. “For example, a dog tears their ACL and they have to do a $5,000 surgery on his knee. Well, that isn’t always necessary—we can put a knee brace on a dog. And within just a few months, you can take the knee brace off, and they heal without surgery.”

He emphasizes that the process is also much simpler and, in the long run, people are able to save more money.

“The biggest thing I want people to realize is, compared to surgery, the cost of our prosthetics and our braces are a lot cheaper, and they’re just as effective, if not even better,” Campana said.

So far, the biggest animal Campana has helped by fitting a prosthetic leg is a bull elephant. By this point, he has helped many elephants, having recently returned from Thailand after assisting these animals.

Nonetheless, Campana clears up a very important issue. He said most people think it will be an instant miracle every time, but it’s not always like that.

“Just like people, it takes a while for animals to get adjusted to braces and prosthetics,” Campana said. “Once they finally understand and get used to it, there’s the miracle.”

Once it works well, witnessing the animal’s, caretaker’s, and family’s reactions is the best thing, Campana said.

“The Wizard of Paws,” meanwhile, has been an incredible endeavor, as people all over the world have the opportunity to watch Campana, accompanied by his dog, Henry, travel across the nation in a mobile “limb lab,” helping animals in need. This has also been great fun for Campana’s eldest son.

“He’s 9 years old and loves coming to all the different sanctuaries with me,” Campana said. “My youngest son is still 3, so he doesn’t quite understand everything, but he loves watching my show. He’s always looking at the TV saying ‘Oh, Daddy helps animals. He’s building legs for animals.’”

So what’s next for this busy entrepreneur? He’s currently working on opening a nonprofit called Bionic Barn: a place that will allow pet owners to travel with their animals, big or small, and stay on-site while their prosthetics are built.

“People will get to watch what we do and experience the whole process,” Campana said. “We’re also going to have a few robot animals as well.”

He also wants to start an accreditation body to standardize the industry, as there aren’t many standards at this point, he said.

“This is really, really important,” Campana said. “A lot of people just want to do this, but there is no standard, and so you end up hurting animals, and I don’t want that to happen.”

For Campana, helping animals in need has become his heart’s calling.

“It’s such an addictive feeling … to watch these animals walk again,” he said. “You’re not only helping the animal, but you’re helping the entire family.”

The father of two said that sometimes he’s helping a particular species for the first time, but knows that by offering help to this one animal, he will end up helping other animals.

The feeling of helping is so indescribable, he said, that he wants to do it over and over again.

“The Wizard of Paws” is available to stream for free on the BYUtv app and at BYUtv.org.