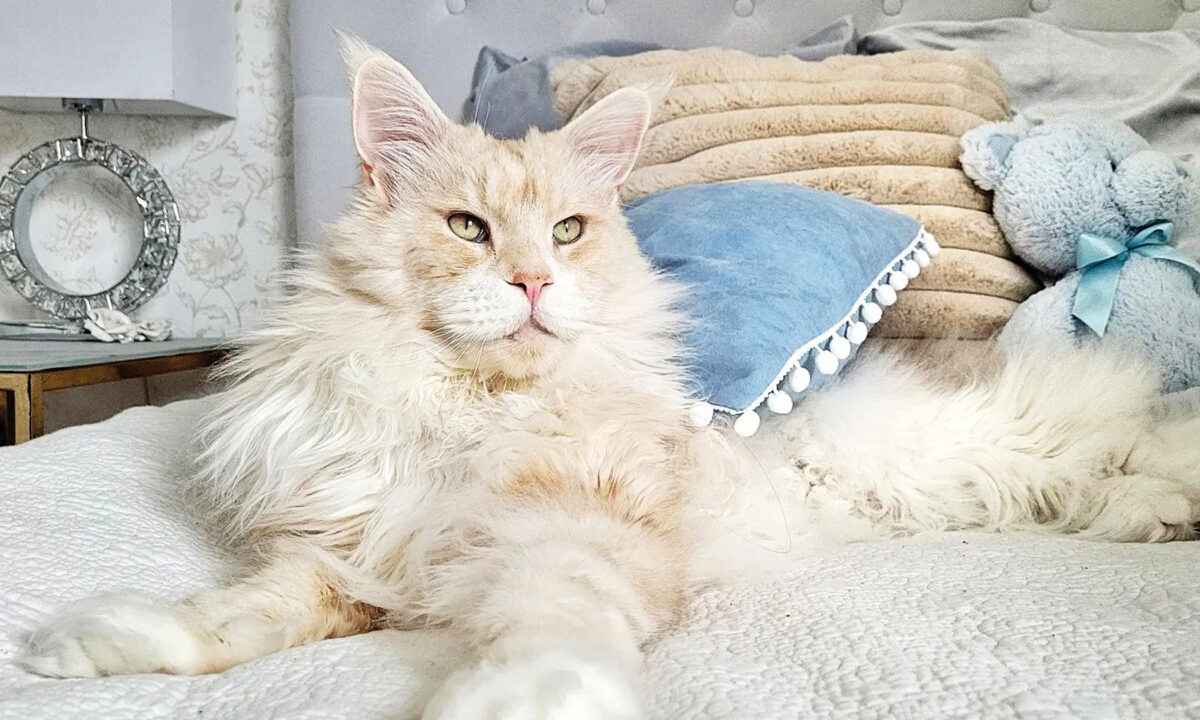 Meet ﻿Lotus, the Majestic 22-Pound Maine Coon Cat Who Is ‘Everything’ to His Owner

A Maine coon with his own Instagram account is proving that these huge fluffy cats with lion-like manes are truly the “gentle giants” of the domestic cat world.

A majestic 6-year-old Maine coon named Lotus lives with his family in Jämtland, Sweden. Owner Lindstein, an IT industry employee in her 40s, adopted him from a breeder in Norway when he was just 13 weeks old.

“They get along very well together,” Lindstein told The Epoch Times. “He is social and kind to everyone, whether animal or human. He came into my life at a very important time and from there, our bond has grown. He’s my everything!”

Lotus, who dwarfs his human siblings when he sits with them on the sofa, weighs an impressive 22 pounds (10 kg). The Maine coon is a large breed of cat, but Lotus is a little larger than average.

His name comes from the fact that he looks like a lynx with his hairy ears; lo means “lynx” in Swedish, and tus means “tuft of hair.”

Lindstein said some people think Lotus looks like a lion, owing to the fur around his neck, and most are impressed when they meet him. “If they see him from a distance and we are out for a walk, many people think he is a dog,” she said.

Lotus, Marion, and Chivaz are indoor cats, but Lindstein and her family take them on adventures using dog-sized harnesses. Even if the cats get loose, they stick close to their family, with whom they feel safe. Lotus has accompanied Lindstein on “a lot on adventures,” and is a guaranteed talking point with new people. His Instagram page, which sometimes features his photogenic siblings, has over 340,000 followers to date.

Lindstein and her kids brush and take care of their Maine coons’ luxurious fur by adding special oils and vitamins to their diet. Sometimes, the cats are given moose meat as a treat. To accommodate Lotus’s large size, his family has also had to invest in super-sized transport cages.

“Many people say they thought they had big cats, but that Lotus is much bigger!” said Lindstein.

Lotus has made friends with numerous animals over the years. Lindstein used to keep a rabbit, and Lotus was smitten; “When the rabbit ate hay, Lotus also tried to chew on some straws. I don’t know if he really liked it [but] it looked very cute,” Lindstein recalled.

Today, Lotus gets on well with Lindstein’s mother-in-law’s chihuahua. Among Lindstein’s fondest memories of Lotus is the time he stole a stuffed animal, intended for her daughter, as a kitten.

She recalled, “When she went to bed, she wanted to take the stuffed animal. Lotus came and wanted to join, but went completely crazy on the stuffed animal and wanted it for himself. He took it in his mouth and walked away with it. I went after and took it back to my daughter, but he was quickly there again, took it, and left.”

“He got to keep it of course,” she quipped, “and it has since been his absolute favorite toy!”

Lotus, who will turn 7 years old in July, seems unaware of his size. Sometimes he thinks he’s a wildcat, sometimes a delicate house kitten.

Lindstein recalled, “Once when we were in our cabin, two deer came to the meadow eating grass. Lotus thought he could catch one of them, so he snuck up on them. He realized after a while that they were too far away and far too big for him.

“Catching flies is more appropriate for him; he’s so clumsy, so he’s not that good at hunting!” she said.

Check out more of the gentle giant Lotus below: