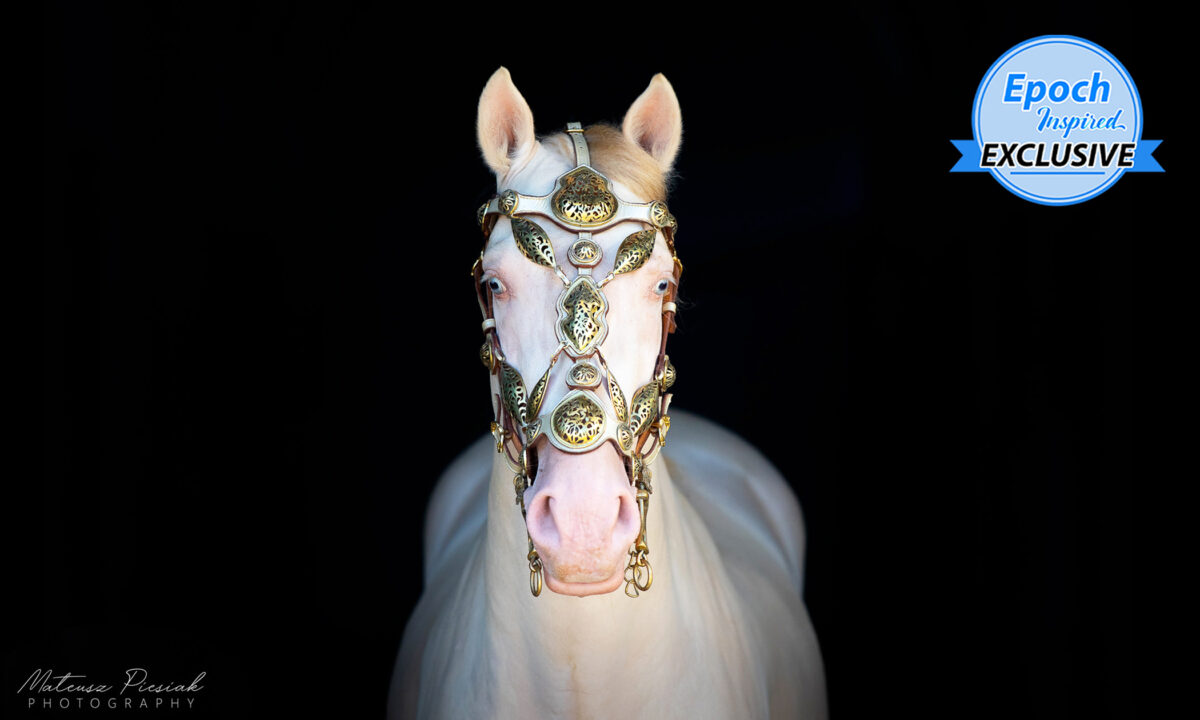 With perlino hair and a golden mane that glistens like amber in the sun, the pureblood Andalusian horse named Ámbar is the apple of his owner’s eye. The photogenic stallion is also a sought-after photo subject, and an ambassador for his owner’s riding school—a haven in southern Spain where horse lovers can learn to ride with their hearts, not their heads.

Polish-born veterinarian and horse rider Blanka Satora says she knew from the start that she would be 6-year-old Ámbar’s first trainer.

“My first ride with Ámbar was the greatest feeling in the world,” she told The Epoch Times. “He was super sensitive, always focused on me, and tried to please me. Our bond has transitioned into almost a telepathic conversation.”

Ámbar, meaning “amber,” is a Pure Spanish Horse, or PRE (Pura Raza Española), with a cream gene. He stands 1.65 meters (5 feet 5 inches) tall, and lives with his owner and her dogs in Sanlúcar de Barrameda, a Spanish oceanside city known for its sherry cellars and waterfront horse races.

Blanka claims the horse’s best physical feature is his golden color, as it amplifies his poised, expressive movements.

“He is unselfish, generous, and playful, much more professional than his brothers, fearless, confident, and trustworthy,” she said. “I can guarantee that he would do whatever I ask him to, without hesitation, because he trusts me. That’s why I am respectful and extremely cautious … he sometimes desires to make you so happy that he gives you more than you ask for.”

“He entered the water and it was very natural for him, like he’d done this many times in previous lives,” she marveled. “I was surprised; my other horses always hesitate a little before entering, because of the waves, but for him it was fun.”

Blanka purchased the plucky stallion after first falling in love with his brother Zafiro, a “perfect combination of morphology and spirit” whom she bought in 2019 and likens to a “happy-go-lucky Labrador.” As a result, she called horse salesmen across the country to locate Zafiro’s brothers, eventually finding and reuniting two: Turrón and Ámbar.

She has received innumerable offers from people wanting to buy Ámbar, the jewel in her crown, but their bond is too strong to consider selling.

Blanka’s love for animals was born in the Polish countryside town of Green Mountain, where her grandmother lived. She adored her grandmother’s piglets, whom she even slept beside, but the star of the show was the resident horse who went straight to Blanka’s heart.

“This passion drove me toward horseback riding and ultimately attending veterinary school,” she recalled.

Her passion has since expanded into learning different styles of horse riding, and how to perfect an emotional bond with a horse. She has owned and trained more than 30 horses, including Friesians, Andalusians, Lusitanos, Welsh ponies, and Hispano-Árabes, and has competed as a rider in the UK, Poland, Slovakia, the Czech Republic, and Spain.

“The Spanish horse riding style is central to my heart,” she said, “because it’s kind of the opposite of how most people approach horse riding, using their head much more than their heart.”

Blanka believes in working with horses from a young age in order to build a strong emotional connection, and a strong foundation based on symbiotic movement.

“This helps with the cooperative engagement and mental sharpness between the horse and its rider,” she explained.

She shares the magic of Spanish horses with others, plus tips, tricks, and horsemanship techniques from her riding stables, Royal Stables of Blanka Satora Horse Show. Visitors may even have the chance to see Ámbar, the king stallion himself, in all his glory.