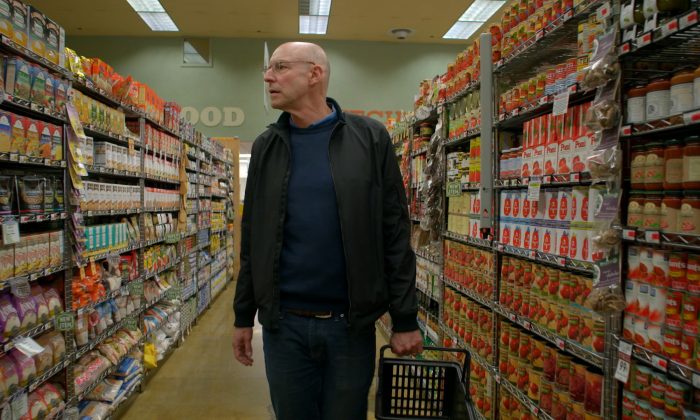 Michael Pollan educates viewers how to shop the outer perimeter of the supermarket to find real food rather than “food-like substances.” (John Chater)
Business & Economy

Food guru's new film, 'In Defense of Food,' reminds us to eat real food. Guess what? It's happening.
By Andrea Hayley

Those who know anything about Michael Pollan know that the esteemed UC Berkeley Graduate School of Journalism professor has dedicated a good part of his life to the exploration of food and culture in America. Every time he publishes a new book, his obsessions become our obsessions.

His influence is substantial. About his first best-selling book (he’s had four on the New York Times Best Seller list), “The Omnivore’s Dilemma: A Natural History of Four Meals,” published in 2006, a Guardian editorial waxed, “Not since Rachel Carson’s ‘The Silent Spring’ has a writer joined up agriculture, food, and health in this compelling way.”

His ideas have also been featured in influential films, such as the Academy-award nominated “Food, Inc.,” which revealed for millions of us the environmentally harmful and often abusive practices endemic in American agribusiness.

His work is creative, and Pollan challenges us to think deeply. His 2001 book, “The Botany of Desire: A Plant’s-Eye View of the World,” explores the co-evolutionary relationship between humans and four plants: the apple, the tulip, marijuana, and the potato. Who would have thought about this otherwise?

People loved it. “Botany” was book of the year for the American Booksellers Association and Amazon, and became the subject of a film produced by Michael Schwarz.

Today, the two Michaels, Schwarz and Pollan, have teamed up again to make a documentary titled “In Defense of Food,” based on Pollan’s book of the same name, which was published in 2008. The film from Kikim Media premiered on PBS Wednesday, Dec. 30, at 9 p.m. EST.

The documentary follows Pollan’s path of learning what Americans should eat to be healthy. It travels through history and exposes truisms we once held about nutrition as pure falsehoods. It said that much of the food industry is still based on the idea that eating the right nutrients is what matters, that history shows we usually get our recommendations wrong, and based on current science we still don’t know how to manufacture health.

“A trip to the supermarket has become kind of a journey through a treacherous landscape,” Pollan said in the film. He suggests we stay away from ingredients our grandmother can’t pronounce, and reminds us that real foods don’t have labels.

A trip to the supermarket has become kind of a journey through a treacherous landscape.
— Michael Pollan, author

Substantiated by fascinating research and visuals, but coming across more like honest common sense, the film (and Pollan’s) overarching message is that we should just eat food.

Since 2008 American food culture has picked up steam, and it is now safe to declare that we have entered the era of the foodie. Food bloggers, celebrity chefs, innovative restaurant concepts, organics, and food-focused entertainment demand a greater share of our attention than ever before.

And with this explosion of awareness, came an interest in real solutions to our health crisis, with its record cases of food-related diseases: obesity, heart disease, cancers, and Type 2 diabetes.

In 2012, a collection of entrepreneurs saw a business opportunity that would help Americans get back into the kitchen. HelloFresh US, Blue Apron, and Plated all started meal kit delivery services that year, with head offices all based in New York City. This year saw the entrance of Berlin-based Marley Spoon, and a vegan-only option from Purple Carrot, with Mark Bittman’s backing.

In 2012, a collection of entrepreneurs saw a business opportunity that would help Americans get back into the kitchen.

Each of these companies is now growing by leaps and bounds, and consumers seem to love the way the services help them cook. Both HelloFresh and Blue Apron deliver more than 5 million meals per month.

And these businesses are just the tip of the iceberg for the on-demand food delivery industry, which includes prepared food delivery, delivery of specialty or locally grown produce, and restaurant food delivery. One of the latest entrants in New York is David Chang of Momofuku fame’s new venture, Maple, which operates like a restaurant, except it’s optimized for delivery only.

Plated’s CEO Nick Taranto told “Fortune Live” in May there was room for many players in a market he valued at $500 billion in dinner alone. “The market forces driving this are the consumer at the end of the day,” he said.

Marley Spoon’s Culinary Director Jennifer Aaronson said in an email interview its customers want to be cooking at home. “They want to know what goes into the food they are eating,  and they are thrilled to find a modern solution that satisfies their needs.” She added that many of its customers are using the service three to five nights per week, seeing it as a better meal option than “greasy takeout, or frozen, prepacked, processed foods.”

The way the services work is you order from a selection of online menu options, and a box gets delivered to your door filled with the ingredients you need to make the dishes, along with recipe instructions and nutritional information. Often the ingredients are locally sourced, even organic. The menu choices are also diverse, portion-controlled, and health consistent.

Rebecca Lewis, chief dietician at HelloFresh, said, “Pollan takes you on a journey to understand where the problems are.”

Pollan takes you on a journey to understand where the problems are.
— Rebecca Lewis, dietician, HelloFresh

Lewis credits Pollan for raising awareness about the issues, and she is thrilled to be part of the solution. “HelloFresh is changing how people eat,” she said. “We are empowering people in the kitchen, and getting people excited about cooking again.”

Lewis said the problems of poor diet, and poor health, stem directly from the fact that as a community, we have lost our capacity to cook. Fifty percent of Americans’ food budgets are spent on food prepared outside the home, she said, which is typically high in fat, salt, and sugar. And we are now two generations into a cycle where children no longer watch their parents cook.

Fifty percent of Americans’ food budgets are spent on food prepared outside the home.

She said recipes or ingredients that may intimidate home cooks are demystified through the HelloFresh service, where recipes are created by skilled chefs, tested for quality, and must pass muster by her for nutrition before they’re offered.

It also helps to add diverse foods to our diets, with access to the vitamins, minerals, and fiber these foods contain. Using the meal kit service regularly, a household may encounter 40–50 different types of produce in a month, according to Lewis, whereas a typical household will use just 5–10 items.

Diversity is important if Americans are going to get all their nutritional needs only from the food they eat, as Pollan advised. Luckily, Americans have more choices than ever to access a variety of foods. With all the venture capital excitement around healthy food businesses, it appears an epilogue for Pollan’s book is writing itself.