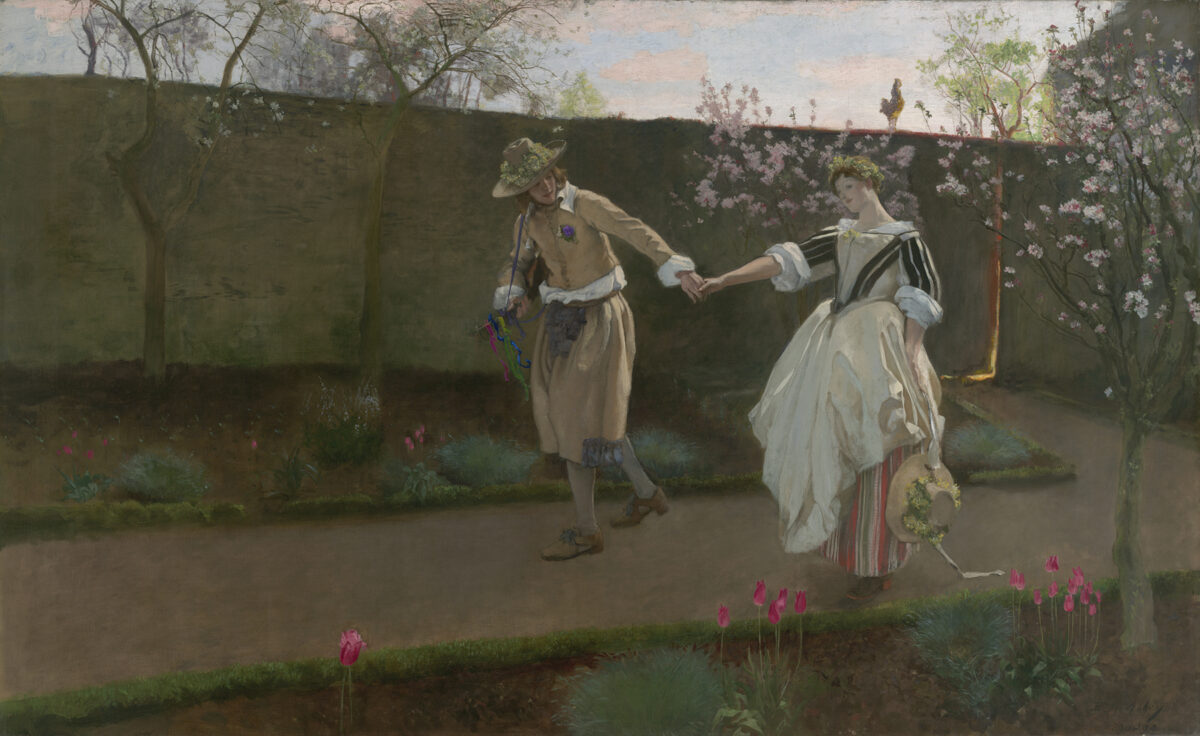 Maypoles, Mary, Flowers, and Poets: The Many Enchantments of May

“May is pretty, May is mild,
Dances like a happy child;
Sing out, robin; spring out, flowers;
April went with all her showers
And the world is green again. …”

In many lands around the world, the fifth month of the calendar year signals the end of winter and heralds the arrival of summer. The trees sway in warm, sweet breezes, the lawns gown themselves in green, and the very air seems fresh as dawn all day.

And those opening lines to Annette Wynne’s poem for children are but one tiny bud in the great garden of literature, the arts, and custom itself that salutes this month.

In his vibrant painting “Spring,” for example, artist Lawrence Alma-Tadema re-creates a marble city of the Roman Empire and a blossom-decked parade led by musicians and girls in white dresses. They may be celebrating Floralia, the holiday for Flora—the goddess of flowers, vegetation, and fertility—which occurred in late April. The quiet dignity we find in the faces of these men, women, and children is offset by the heralds of the season: the colorful boughs and bouquets they are carrying.

We moderns have a connection to these ancients, for May derives its name from Maia Majesta, a Greco-Roman goddess of fertility and springtime. And long after the collapse of Rome and the end of celebrations like the one depicted by Alma-Tadema, other festivities and rituals continued to mark May as special.

A-Maying We Will Go

To “go a-Maying,” which is an expression we can trace back to the 14th century, was to celebrate this month, to “fetche the flowres fresh,” and often to seek romance and revelry. Here’s just one example. Basing some of his verse on Sir Thomas Malory’s Arthurian works, Alfred Lord Tennyson in “Idylls of the King” at one point describes Queen Guinevere and her attendants in this fashion:

“For thus it chanced one morn when all the court,
Green-suited, but with plumes that mocked the may,
Had been, their wont, a-maying and returned. …”

To go a-Maying might also mean romance. In his 1595 song “Now Is the Month of Maying,” called a ballet, Thomas Morley writes:

Round and Round They Go

Allied to these dalliances with the month of Maia are maypoles and May Queens.

The origins of the maypole are lost in the mists of history—many believe these ancient rituals began in Germany—but this ceremony is almost certainly a fertility dance, a whirling pagan prayer for fecundity and healthy crops. Men and women in those long-ago times first danced around a live tree, sometimes decorated. As the custom evolved, the object of their frolic became a cut tree shorn of its branches and plugged into the earth, around which dancers spun in circled patterns, weaving around one another while adorning the pole in complicated tangles of foliage and ribbons.

Not everyone was enamored of these festivities. In 1644, for example, Oliver Cromwell, Lord Protector of England, and his government banned maypoles and ordered those standing to be torn down, describing them as “a Heathenish vanity, generally abused to superstition and wickedness.” Following his death and the dissolution of his government, maypoles once again became popular in England.

During the Victorian era, the maypole dance became much tamer, with young girls dressed in their finery dancing and decorating the pole. As we learn from John Chu of Britain’s National Trust, the May Queen, another old custom of these celebrations, was “embodied by a young girl decorously dressed in white and crowned with flowers. Accompanied by a ‘court’ of other girls, the May Queen had become a symbol of purity and the promise of spring.”

These customs continue to this day in many different places, with men and women erecting these poles, decorating them with bright ribbons,  and weaving in and out of the dance.

The Month of Mary

The Roman Catholic Church kicks off May with the Feast of Saint Joseph the Worker, but otherwise devotes the entire month to his earthly spouse, Mary, who in many places is honored with the title “Queen of May.” Churches frequently feature Marian hymns during Mass, she is the subject of homilies and the center of special devotions, and parishioners are encouraged to pray the rosary.

Usually, May is the month for Catholic children to receive their first communion. Often, this occasion includes a brief ceremony in which a young woman, dressed in her white gown, places a crown of flowers on the head of Mary’s statue.

Poets like Robert Herrick, William Wordsworth, Leigh Hunt, and Emily Dickinson have all paid homage to the gentle beauties and passing joys of May. In “May and the Poets,” Leigh Hunt remembers some of the earlier bards of this merry month:

There is May in books forever;
May will part from Spenser never;
May’s in Milton, May’s in Prior,
May’s in Chaucer, Thomson, Dyer;
May’s in all the Italian books:—
She has old and modern nooks,
Where she sleeps with nymphs and elves,
In happy places they call shelves,
And will rise and dress your rooms
With a drapery thick with blooms.
Come, ye rains, then if ye will,
May’s at home, and with me still;
But come rather, thou, good weather,
And find us in the fields together.

Writers of verse have also employed May as a metaphor for youth and love. In these lines from “It Is Not Always May,” Henry Wadsworth Longfellow advocates for “carpe diem” as he urges a young woman to make the most of this Maytime of her life:

“Maiden, that read’st this simple rhyme,
Enjoy thy youth, it will not stay;
Enjoy the fragrance of thy prime,
For oh, it is not always May!”

On the other hand, another poet, Christina Rossetti, reminds us in this truncated sonnet that despite the season, the world goes on spinning, and we go on spinning with it. Not all in May is merriment.

“I cannot tell you how it was,
But this I know: it came to pass
Upon a bright and sunny day
When May was young; ah, pleasant May!
As yet the poppies were not born
Between the blades of tender corn;
The last egg had not hatched as yet,
Nor any bird foregone its mate.

I cannot tell you what it was,
But this I know: it did but pass.
It passed away with sunny May,
Like all sweet things it passed away,
And left me old, and cold, and gray.”

A Toast to the Month of Flowers

That last line hits the reader like an unexpected punch. But another of Rossetti’s poems offers a more tender view of the month of merriment and gaiety:

Here, Rossetti reminds us that though May might not be the month of sunshine and soft winds as so many other poets have proclaimed, it nevertheless bestows on us its lilies, lilacs, and other bursts of color and blossom.

Few of us moderns go a-maying or wend our way around a maypole, but like our agrarian ancestors we can enjoy the bounties of May and raise a glass to its beauty.

And we can, as the hoary old cliché goes, stop and smell the flowers.