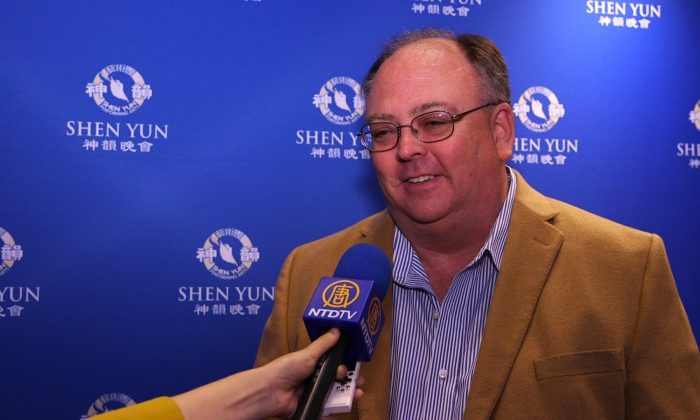 LONG BEACH, Calif.—Mayor Richard Murphy was in awe of the Shen Yun performers,”You know how talented they are. They’re just incredible! I really appreciate it!”

Being Los Alamitos’s Mayor is only the latest in a long string of professional feathers in Richard Murphy’s cap. He was a CPA with his own firm for 25 years, as well a financial officer of various private and public companies.

Shen Yun Performing Arts has become an international sensation since its founding in 2006. World-class artists joined together to bring back to the world the best of ancient Chinese traditions, legends, and spiritual values.

Shen Yun’s website provides a wealth of education for the public: “In performing theatrical dance, classical Chinese dance involves a dance acting element. The acting in dance is different from that of film, drama, opera, traditional Chinese theater arts, or Broadway musicals. The acting in classical Chinese dance involves coordinating facial expression with physical movement, which, when merged together, results in an amplified form of expression.”

Mayor Murphy was enchanted and thrilled by the talent of the dancers.

“They’re just unreal. I don’t know how many hours they practice for this show, but it sure pays off,” he said, “It’s incredible. Everybody moves as one, even with the scarves and everything, that’s not easy, and yet, 12 people, one movement.”

“Even the guys on the drums in the last dance, they all hit the same time, every time, not one mistake. Just phenomenal.”

He said his feeling could only be summed up with two phrases, “just awe” and “just fabulous.”

Ancient Chinese culture was considered to be a divinely inspired culture. Looking deeper into the inspiration that drives Shen Yun performers one discovers that it is rooted in a vast reservoir of traditional Chinese culture.

Shen Yun’s website illustrates this. “Mortals and divine beings merge on stage as one. Principles such as benevolence and justice, propriety and wisdom, respect for the heavens, and divine retribution, all come to life, washing over the audience. Originating from Confucianism, Buddhism, and Taoism, these ideals are the essence of traditional Chinese culture.”

Restoration of the traditional values was a wonderful highlight of the Shen Yun experience for Mayor Murphy.

“You know that it’s hard to keep the values going,” the Mayor said, “But it’s well worth the effort. You know, there are a lot of kids here today. I think it’s really paying off.”

He continued, “… the solid old values, they never go away, really. They just have to be relearned, I think. But every generation they—all those values—are always there.”

One of the dance vignettes really touched Mayor Murphy’s heart. It was the “Dance of the Grasslands.”

The Shen Yun program characterizes this piece as “A drumbeat sounds over the lush green grasslands home to the Mongolians. There, a hearty group of horsemen, each carrying thin-skinned paddle drums, take to the open plains in unfettered cheer. Powerful and masculine, Mongolian ethnic dance is characterized by its wide, billowing arm movements and nimble footwork, evoking images of flying eagles and wild stallions.”

“I thought the last group, the grass dance, just how, all those drums, and they came together,” Mayor Murphy said enthusiastically,”And it’s just phenomenal!”

The Mayor urged others to experience the Shen Yun adventure into mystical and ancient realms.

“You have to see this show. It’s just incredible,” said Mayor Murphy in closing. “The dancing, the music, it’s all perfect!”