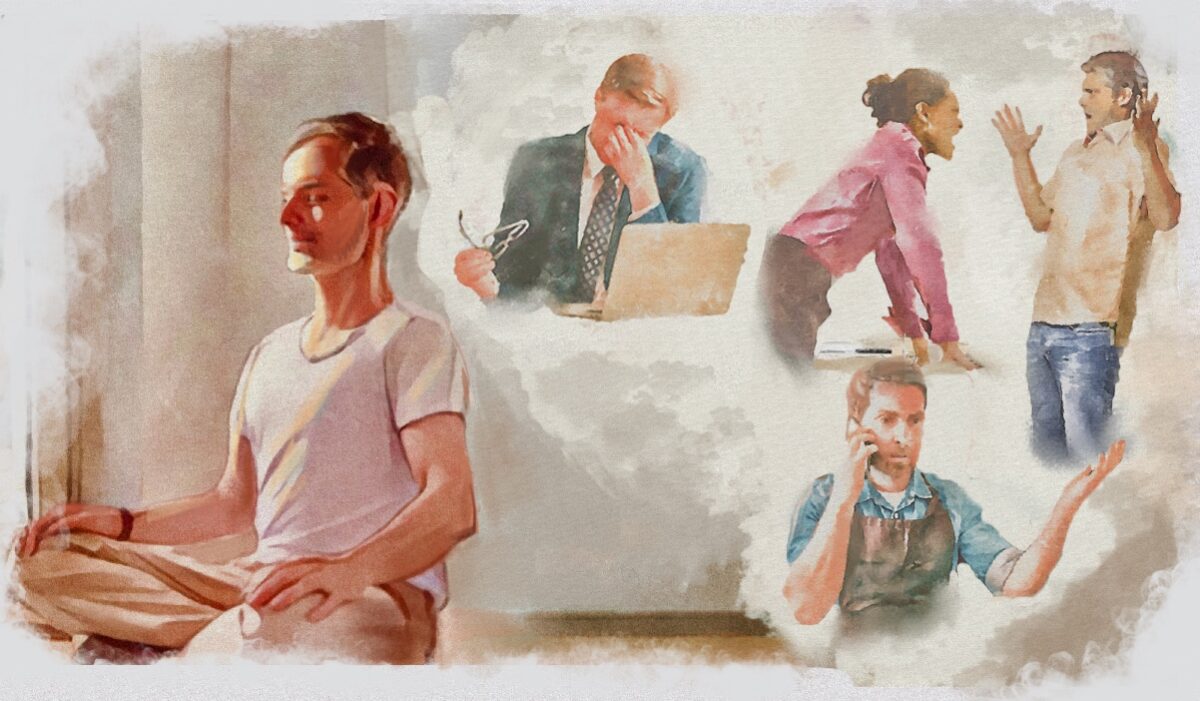 Learn to take a moment to turn within before reacting. (Fei Meng)
Family & Education

Many people sail on a pretty even keel when it comes to their emotions. They can become sad without collapsing in sobs or angry without giving way to rage and hysteria. Pardon the mixed metaphors of seamanship and masonry, but put a bricklayer’s level on these folks and you’d find them plumb, with that bubble dancing in the glass right where it should be.

A couple of people I know do have triggers that can roil up strong emotions. Mention politics to one friend, and odds are you’ve just lighted a wildfire on a dry prairie. Everyday stress—work-related problems, misunderstandings with a child or a friend, computer glitches—can pitch another acquaintance into a mosh pit of self-pity and wild despondency.

And a few men and women apparently wear one mask in public and another in the privacy of their homes. They flick on their screens, devour some article or social media post, and the veneer of civilization, always thin, is torn away. The quiet, helpful guy at the office returns home in the evening, rolls up his sleeves, pops open a beer, and becomes a volcano of online rage under the pseudonym “Morlock.” The library receptionist, always ready to greet patrons with a smile, mercilessly mocks them and their selection of books on her anonymous blog.

Those screens and pen names bring out the worst in some users, allowing them to draw their swords and run amok. Their unleashed emotions overwhelm their powers of reason.

“I feel, therefore I am” has also become a byword in public life, creating a culture of disrespect or narcissism. Critics who despise Donald Trump, for example, rightly accuse him of rude tweets and demeaning his opponents with nasty nicknames, but then they follow suit by abusing him with ad hominem insults.

Shoppers in my local grocery store, many of them young, indulge in casual obscenities once reserved for barracks or a locker room. Some who claim they belong to a different race or sex, or feel the urge to practice certain predilections no matter how bizarre, declare their feelings as truisms that others should accept without question.

On a personal level, feelings can also dangerously dominate our own behavior. For seemingly no reason whatsoever, a man wakes one morning ready to bite the head off the first person who looks at him cross-eyed. After a particularly grueling day, overwhelmed by the demands of work or children, a woman trudges through the twilight hours and falls into bed feeling sad and lost, too beaten down to see that fatigue and not reality has generated this mood.

The 17th and 18th centuries are sometimes called the Age of Reason. With all our psychologists and counselors, our self-help books, and our emphasis on subjectivity and the individual, the past two centuries might someday be labeled the “Age of Passion and Sentiment.” The 19th-century Romantics are the ancestors of our current rock-and-roll festival of emotions.

This romanticism was a reaction against the earlier advocates of reason and logic. Yet perhaps the stage is set for another rebellion, this time against the psychobabble and overwrought passions of today’s culture.

As in so much of life, perhaps temperance is the target we should aim for, a balance of feeling and thinking—what Aristotle dubbed the “golden mean.” Emotions tempered by reason, and vice versa, won’t solve all the problems of this raucous world, but guiding the tumbling waters of the heart with the riverbanks of the head might give us a better chance as individuals for happiness and contentment.