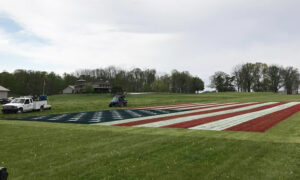 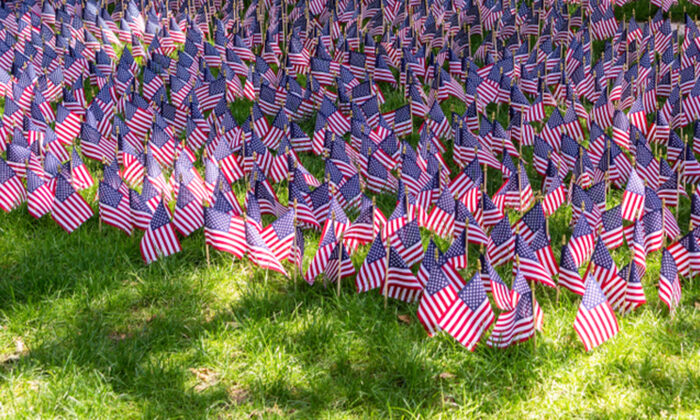 Massachusetts Family Plants Over 8,000 Flags on Front Yard for COVID-19 Deaths in the State

A patriotic Massachusetts family is paying tribute to CCP virus fatalities in their home state by placing a miniature American flag in their front yard for every victim. At the time of writing, the family has planted just over 8,000 flags.

The Labbe family, of Grafton, Massachusetts, also hopes that the flags will draw attention to the “true heroes” of the pandemic, the first responders, nurses, and doctors working on the front lines.

“People have died in the hospital without families around, so we just wanted to give back to them,” daughter Melissa Labbe, 15, told Boston 25 News. “We are still hoping it doesn’t go too much more, but we may have to.”

The Labbes’ special tribute has cost them thousands of dollars and manpower, but they have politely refused donations even though they have taken a financial hit due to the CCP (Chinese Communist Party) virus, commonly known as the novel coronavirus. The family is more concerned about running out of space in their front yard on Keith Hill Road.

“Never in a million years did I ever think we’d get to this number,” father Michael Labbe, 54, told The Milford Daily News. “We obviously prayed to be in the hundreds, not thousands,” he reflected. “Unfortunately, sadly, it’s still growing.”

Michael served as an EMT, a firefighter, and a police officer before opening his own business. He began planting flags on his family’s front lawn just six days after the first virus deaths in Massachusetts state were announced.

To protect their lawn, the family has placed wooden boards on the ground, each with 25 hand-drilled holes to bear the miniature flags. Michael’s children have taken the lead on placing the flags each time new deaths are reported.

“Ninety-five percent of these people didn’t get to say goodbye to their mothers, their fathers, their brothers, their sisters, their children,” Michael reflected. “And if [visitors] can pull up here and see that and it gives them a little bit of stress relief, or comfort, it’s worth every ounce of effort.”

“It’s about paying it forward in life,” he added.

Drive-by visitors to the Labbes’ home are met with a large sign by the lawn that reads, “Every flag you see represents each life taken here in Massachusetts by the faceless beast called coronavirus.”

“Thank you to all the men and women on the front lines protecting us here and abroad,” the sign continues. “You are the true heroes.”

The moving tribute has attracted as many as 30 to 40 visitors per day on weekends. The Labbes welcome everyone while requesting that all drive-by visitations respect social distancing regulations. Previously, the Labbe family home was locally famed for its elaborate Christmas decorations.

Visitor Janice Norsigian, from Milbury, lost her brother-in-law to the virus. “I think it’s nice for them to go through all the trouble of doing that to honor everyone,” she told Boston 25 News, praising the patriotic front lawn display.

Michael informed The Milford Daily News that he plans to sell the miniature American flags for US$1 each and donate the proceeds to charity when the pandemic subsides.

“It’s his way of showing that he cares about everyone,” Melissa reflected. “I think it’s amazing that he thought of this and he’s just an amazing role model for all of us.”