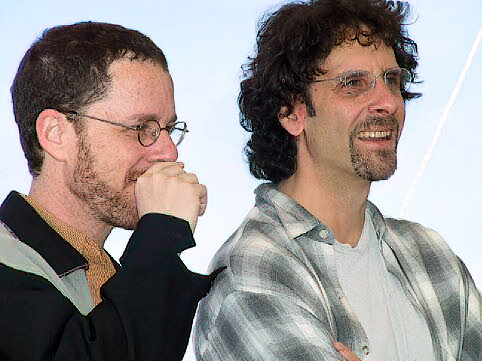 The 18 films of Joel and Ethan Coen are remarkable for their range of story content, from gangster tales to Hollywood stories to modern comedy, Westerns, and complex allegories. Through most, if not all of them, run a double thread: the masculine need to counter bad actions with good ones, and the feminine role in shaping the masculine.

Both sexes contain both conditions as potential, but the physical characteristics of each—such as more muscle-making testosterone in men, and the ability to bear children in women—mean that men show greater masculinity overall, while women are generally more feminine. While these obvious facts are today denied by some, they are central to understanding the Coen brothers’ films. (They are handy in life, as well.)

The Coens’ remake of “True Grit” (2010) is a quantum advance on the 1969 film of the Charles Portis novel because it recognizes that the story is about Mattie rather than Rooster Cogburn. At the outset, it is she, not Rooster, who possesses the quality of the movie’s title. Mattie’s father has been murdered, and she is intent on finding and punishing his killer.

This brings out masculine characteristics of determination and purposeful action—“true grit.” A child of 14, Mattie realizes that she needs a man to help her, so she hires Rooster Cogburn, a federal marshal with a reputation for ruthlessness and heavy drinking. Mattie’s fierce mental determination and Rooster’s dominating physicality, abetted by a semicomical Texas Ranger, launch a search for the killer.

As the manhunt continues, Mattie’s feminine aspects begin to grow, first in her gentleness toward Rooster, despite growing awareness of his drunken incompetence, and more poignantly in burgeoning feelings of love for the Texas Ranger. At the story’s climax, Mattie kills her father’s murderer, paying for it when the recoil from her revolver throws her into a snake pit and she is bitten.

It is at this point—and not during the famous duel on horseback just before, a vain act which Rooster botches—that Rooster is roused from his slumbering masculinity to fulfill one of a man’s most solemn masculine obligations: to protect. Rooster throws Mattie on her horse (his has been shot from under him), rides until the horse collapses of exhaustion, and then carries her in his arms to get her to a doctor. Mattie loses an arm, but her life is saved.

Masculinity Saved by the Feminine

In “The Big Lebowski” (1998), set in the early ’90s, the main character of The Dude (Jeff Bridges) is an echo of the 1960s, of hippiedom and drugs and an ineffectual lifestyle. He is the furthest thing from masculine as a man might be. And yet the film opens with “Tumbling Tumbleweeds” sung by the Sons of the Pioneers, conjuring John Wayne and John Ford and the celebrated masculinity of the cowboy.

A voiceover (which we later learn is movie cowboy icon Sam Elliott) tells us that while the city of Los Angeles isn’t exactly what the pioneers had in mind, “sometimes there is a man. … ” The phrase is repeated several times as an introduction to The Dude, also known as Jeff Lebowski.

Clearly, he is “the man.” But in what respect? The Dude is a figure of ridicule, not heroism, so it’s hilarious that his suppressed masculinity is aroused when an intruder urinates on his rug. In possibly the only action The Dude has taken outside the bowling alley in years, he steals another rug to replace it. This sets off a series of unlikely events that along the way find him in bed with the only female character in the film. She becomes pregnant, and by the time Sam Elliott returns to narrate the film’s conclusion, a “little Lebowski is on the way.”

This singularly female or feminine act, a woman’s nurturing of his seed, saves The Dude. His misadventures have come to naught, but “The Dude abides,” as the character’s last lines have it.

We should have known that something like this would happen, because the songs chosen by the Coens frequently give away a film’s theme. And twice in the early scenes of “The Big Lebowski,” we hear Bob Dylan’s “The Man in Me” with the core lines, “Take a woman like your kind/ To find the man in me.” “Sometimes there is a man.” But there’s always a woman.

In “A Serious Man” (2009), a loose updating of the biblical Book of Job, physics professor Larry Gopnik is an ineffectual family man whose wife leaves him for another: Sy Ableman (“Sy, able man.”)

At the same time, his ill and clinging brother mooches off Larry and his son; Larry’s son is approaching his bar mitzvah and is a nascent stoner. Larry consults two rabbis in the search for understanding. The first gives him pointless non-advice, while the second references Kabbalah mysticism.

Larry fails to fight for his wife, but in the end, things rectify of their own accord. Larry’s son, in connection with a Hebrew school offense, is brought before a third, elderly rabbi. That rabbi’s simple admonition, “Be a good boy,” echoes the moral of the film’s key song, Jefferson Airplane’s “Somebody to Love.”

Reflection on the plot makes it clear that an important element in a man’s loving somebody is the masculine trait of providing for them, emotionally as well as physically, of being an “able man.” We see that, but we’re not sure Larry has learned the lesson.

Another film, “Hail, Caesar!” (2016), set in 1951 Hollywood, concerns Eddie Mannix, who is a Hollywood “fixer”—that is, someone whose job it is to keep the negative aspects of stars’ lives under wraps. It’s a comedy about faith. Eddie (based on a real-life figure of the same name) must decide between keeping his job or accepting a much more lucrative position with Lockheed.

He must decide between doing what he loves and doing what he thinks might be better for his family, while in the middle of resolving the abduction of one of his studio’s biggest stars by a communist writer’s cabal. His wife, the epitome of feminine support for the masculine, doesn’t push for more money, but she urges him to decide the best course of action.

When his priest echoes this with “God wants us to do what is right,” Eddie knows the answer. Faith is the feminine sister to masculine reason that lets us know our path, if only we surrender to it. (“Faith” is the single word forgotten at the end of a speech by the star in the movie-within-movie, “Hail, Caesar!”) Masculine action without it is doomed, like the ransom collected by the communists, which slips into the Pacific at a crucial moment.

These films are much richer than such brief summaries can convey. The intertwining themes of masculine spark and feminine womb space run throughout them as they do through many of the other 14 films in the brothers’ canon so far. They run through our lives as well.