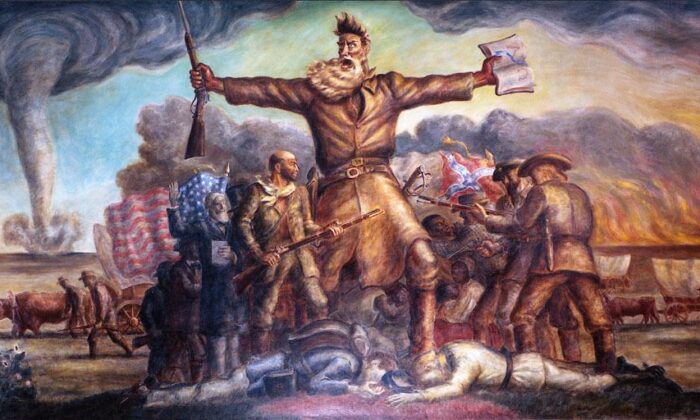 “Tragic Prelude" is a 31-foot-by-11-foot-by-6-inch mural by John Steuart Curry, in 1937, for the Kansas State Capitol in Topeka, Kansas. "I wanted to paint him as a fanatic, for John Brown was a fanatic. He had the wild zeal of the extremist, the fanatic for his cause—and we had the Civil War, with its untold misery," Curry said in a 1939 newspaper interview. (Public Domain)
Traditional Culture

Sunday, Oct. 16, 1859. A light rain fell across the dark and sleeping town of Harper’s Ferry, Virginia.

The name of the town lost its apostrophe in 1891, and earlier, in 1863, the town itself became a part of West Virginia, as the only state to secede from a Confederate state.

But before these changes, on that night in 1859, a band of 21 armed raiders, led by an old man with a white beard, unleashed hell not only on the town but also on the nation.

They kidnapped several prominent citizens, including the slave owner Lewis Washington, a distant relative of America’s first president. They cut telegraph wires in and out of the town, seized the federal armory and a rifle works, and declared to various citizens that an insurrection was underway.

Ironically, of this attempt to spark a slave rebellion, the first casualty was a freed black man, Heyward Shepherd, who worked for the railroad and, while investigating the delay of a train that Brown’s men had stopped, was shot by a raider.

Despite the raiders’ efforts to cut communications, word of this violent raid quickly spread. By Monday afternoon, the old man, who proclaimed himself “here in the name of the Great Jehovah,” found himself and his few surviving followers trapped inside an engine house beside the armory, surrounded by hundreds of armed and enraged townsmen.

Early the next day, after attempts at negotiation had failed, Marines who had arrived from Washington under the command of Col. Robert E. Lee stormed the engine house, captured those inside, and squashed the insurrection.

John Brown’s attempt to launch a slave rebellion failed, but it changed the course of American history forever.

John Brown (1800–1859) was raised in an abolitionist family. His father, for example, helped run the Underground Railroad in Hudson, Ohio. Though credentialed as a Congregationalist minister, Brown was soon operating a tannery business like his father. He was married twice and was the father of 20 children, several of whom died young. Brown’s financial fortunes rose and fell both with the economic trials of his time and from his own often poor business decisions.

Despite his lifelong involvement in the abolitionist movement, it wasn’t until 1855 that John Brown gained a national reputation for his opposition to slavery. Encouraged by two of his sons to go to Kansas to fight the influx of slave owners into that territory, and in retaliation for an attack made by pro-slavers on the town of Lawrence, Brown led a raid against neighbors living in cabins along Pottawatomie Creek, where he and his followers, including two of his sons, executed five men who supported slavery. The “Pottawatomie Massacre” kicked off the killings and guerrilla warfare that soon gave this territory the name of “Bleeding Kansas.”

Returning East, Brown traveled in abolitionist circles, raising money to free slaves and to purchase guns. He had come to believe that only violence would end slavery in America.

And he began plotting the raid on the federal arsenal at Harpers Ferry.

Ernest Hemingway’s “Men at War,” a thick anthology of war stories popular with GIs during World War II, contains a selection from Leonard Ehrlich’s “God’s Angry Man,” his novel about John Brown and the raid on Harpers Ferry. In this passage, Ehrlich imagines John Brown’s thoughts when his sons are dead or dying in the engine house, and he realizes his cause is doomed:

“I suffered much in Kansas. I expect to suffer here, in the cause of human freedom. I have been well known as Old Brown of Kansas. I shed blood on the Pottawatomie. Slaveholders I regard as robbers and murderers, and I have sworn to abolish slavery and liberate my fellow men. And now I am here … I have failed … Two of my sons were killed here today.”

After he was taken into custody, John Brown’s trial lasted five days, and the jury needed only 45 minutes to find him guilty of murder, insurrection, and treason against the Commonwealth of Virginia. On Dec. 2, 1859, he was hanged in Charles Town, Virginia, which is today a part of West Virginia. At that hanging were a number of Americans who would also make their mark on American history: Jeb Stuart, Robert E. Lee, Stonewall Jackson, John Wilkes Booth, who would later assassinate Abraham Lincoln, and possibly even the poet Walt Whitman.

From its inception, Brown’s plan to lead a slave revolt using Harpers Ferry as the base for his operations had no chance of success. He and his men were too few in number to intimidate the citizens of Harpers Ferry, and he apparently lacked the imagination to envision how quickly the raiders would be outnumbered and outgunned.

When he revealed his intentions to a select few supporters, even some Northern freed blacks refused to support him. In his book “John Brown: The Legend Revisited,” Merrill D. Peterson writes of Brown:

“In August he had a secret meeting with Frederick Douglass in nearby Chambersburg, Pennsylvania. He had counted on Douglas to join him. But the black leader, to whom he disclosed his plan more fully than to anyone else, thought it suicidal and declined. His young black companion, Shields Green, however, decided to go with the old man. He eventually met his death on the gallows.”

Brown’s attack on Harpers Ferry and his subsequent execution deepened the fissures dividing North and South into a canyon. Though many Northerners thought his violent actions were wicked and unhinged, many more come to regard Brown as a martyr for a great cause. Fearful of slave rebellions, Southerners tended to regard him as Satan incarnate.

His attempt at insurrection lent an enormous importance to the presidential election of 1860. Watching the reactions to Brown of their countrymen north of the Mason-Dixon Line, Southerners came to believe that the election of Abraham Lincoln to the presidency would mean an end not just to slavery, but also to a decline of Southern influence on national affairs.

Meanwhile, Brown’s death lit a bonfire in the hearts of the ever-growing ranks of abolitionists. Within three years of his death, Northern troops would march into battle singing “John Brown’s Body,” with its signature line: “John Brown’s body lies a-moldering in the grave, but his soul goes marching on.” That song also inspired Julia Ward Howe’s popular 1862 song, the “Battle Hymn of the Republic.”

Just as was true in his own time, through the decades since his death on the gallows, John Brown’s reputation has depended on the biases of its interpreters. As an example, in his reaction to a 1939 mural of Brown painted by Arthur Covey in the capitol building of Topeka, Kansas, state representative Martin Van Buren Van De Mark said: “John Brown was just a crazy old coot. He was nothing but a rascal, a thief, and a murderer … whose memory should not be perpetuated.”

Over the years, some historians and novelists have found grounds for agreement with that statement while others have hailed Brown as a hero and a man of conviction.

In the aforementioned “John Brown: The Legend Revisited,” Merrill Peterson examines in detail these interpretations. He looks at the many books written about Brown—biographies, histories, novels, plays, and even poetry like Stephen Vincent Benét’s epic verse “John Brown’s Body”—and discusses how authors and scholars could reach so many different conclusions regarding him. Was John Brown an egotistical fanatic or a holy man of justice? Was he insane? Was he a righteous warrior? Was he a loving father or a man who drove some of his sons to their deaths fighting slavery?

These questions may not have clear answers, but there is one certainty: John Brown foresaw the savage struggle that would soon engulf the United States of America, a bitter war that would pit North and South against each other. He clearly understood that his attack on Harpers Ferry would cause the nation to take one more step toward that land of death.

On the day of his execution, Brown handed one of his guards a piece of paper with these words: “I, John Brown, am now quite certain that the crimes of this guilty land will never be purged away but with blood. I had, as I now think, vainly flattered myself that without very much bloodshed it might be done.”

Less than two years later, the nation began the bloodiest war in its history, a conflict that would bring an end to slavery. For better or for worse, John Brown loomed large as a major contributor to that savage clash.

In our own divided time, no matter what our political persuasion, John Brown forces us to ask: Are violence and murder justifiable means to ideological ends? What happens when we abandon reason, debate, and goodwill, and turn instead to savagery and killing?

Brown was a man impatient with the possibilities of politics, law, debate, and persuasion as avenues for ending slavery. Like some today, both here and abroad, he believed his cause so just that he was willing to commit the cold-blooded murder of unarmed men, as he and his followers did in Kansas, for the righteousness of his cause. And like some today, he was willing to resort to terrorism as the means to forward his goals, as he hoped to do at Harpers Ferry.

John Brown thus seems an amalgam of all the qualities explored by Merrill Peterson: a man of piety, a fanatic, a seeker after justice, a self-righteous man who believed he had truth in his pocket, a hero, and a villain. He is a mirror, and in him we see what we wish to see.