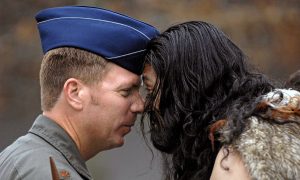 The Hongi: A Traditional Greeting Recaptured
0 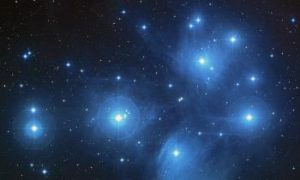 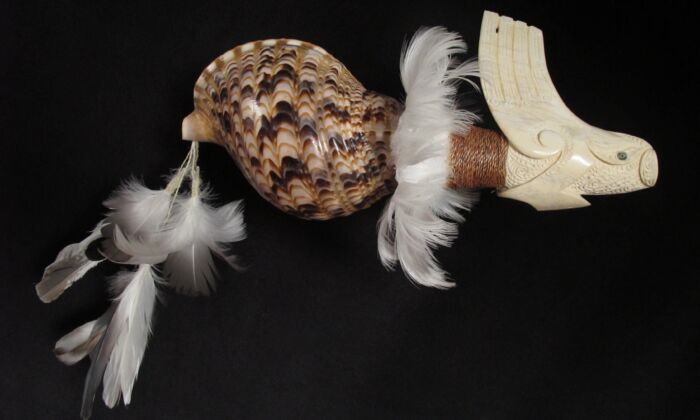 Beyond Music: The Tales of Maori Musical Instruments

A flute, a shell trumpet, and a yo-yo
By Lorraine Ferrier
FONT BFONT SText size
Print

“It was in the night, that the Gods sang the world into existence. From the world of light, into the world of music,” said Ngai Tahu tribal leader Matiaha Tiramorehu in 1849, as he relayed the Maori creation story.

Brian Flintoff, a master carver and traditional Maori instrument maker, stresses the above story in his book “Taonga Puoro: Singing Treasures: The Musical Instruments of the Maori.” Flintoff believes that to appreciate the Maori musical instruments, the cosmology that brought them into existence needs to be understood, that is, the Maori myths and legends.

These tales have passed down the generations largely by word of mouth, with the details of the stories differing slightly. “There are lots of versions of the creation story as would be expected from an oral tradition where important points were added or omitted as fitted the circumstances of the telling, which shows the deficiencies of the printed word,” Flintoff said in an email.

Traditional Maori musical instruments are more than the music they make.

“All the different types of Maori song stem from the emotions displayed by the gods during the creation aeons. There are songs of sorrow, anger, and lament; of loneliness, desire, and joy; of peace and love. The voices of the instruments and the movements of dance support and embellish the songs,” Flintoff wrote.

One of the simplest of instruments is the porotiti, the Maori word for circle. But a porotiti can be any shape as long as it’s balanced, Flintoff explained in a phone interview. It is spun on a string that goes forward and back through two holes in the center, and as it gets up to speed it hums.

“We used to use a coat button on a piece of cotton when we were kids,” Flintoff said. A throwback to Scotland’s heritage, he believes. Many may know the yo-yo, which is similar to the porotiti.

But Maori did something really unique with the instrument. They would blow on the porotiti as it was spinning, so it became a song catcher, he explained.

Not only does the porotiti catch songs, but its music is thought to be medicinal.

In the early days of European settlement, when the influenza came to New Zealand, the Maori had no protection against it. Flintoff explained that a group up in Taranaki, in the west of New Zealand’s North Island, discovered that the children who had been playing the tiny porotiti weren’t getting sick. So the Maori played the porotiti over all the children at night and lost none of them to the flu. Whereas in other areas of New Zealand, whole places were devastated by it.

“The old people, like me, would spin it and dance with it and move it around in different positions, and the vibrations going up the string would help with arthritis,” Flintoff said.

Nowadays, people have had success with it in helping people with asthma, he added.

Listen closely to the koauau, the commonest of the Maori flutes, and you may just hear more than music. Expert musicians are able to play the koauau in such a way that you can hear the words of the song through the flute. So if you really know the song well, you may be able to pick up what the musician is “saying,” Flintoff said.

There are great stories of people sending secret messages through the songs, he said. He recounted one such story of a young man caught wooing the princess of another tribe, for which his punishment would be death: The young man asks if he could please play his koauau first. So he starts by playing a song to his sweetheart. Listening to the song, she picks up that he is telling her to meet him at a certain place. Nobody else hears the message, but she is listening for it. He keeps playing for four hours, and everyone is so entranced with his wonderful playing that they all fall asleep. He takes the opportunity to escape. He runs off and jumps off a cliff into the water below, where his brothers are waiting in a canoe to take him to meet his princess.

The first mention of the putatara or shell trumpet in Maori mythology is when a fanfare is sounded to herald the return of Tane, popularly known as the god of the forests. As the tale goes, Tane goes on a treacherous quest up to the heavens to bring back the three baskets of knowledge (kete o te wananga) to benefit all of mankind. Each of the three baskets contains a different kind of knowledge to help mankind: sacred knowledge, ancestral knowledge, and life knowledge.

Tane’s heavenly trek is fraught with challenges, as all divine quests are. Not only did he have to navigate up to the 12th heaven to request the baskets from the supreme god, Io-matua-kore (Io), but his brother Whiro tries to stop him every which way he can. Even though Tane had been sacredly selected for the task, Whiro believes, as the elder brother, that he deserves to bring back the three baskets of knowledge.

Whiro sends scores of repulsive creatures such as insects, reptiles, and carrion-eating birds from heaven to thwart his brother’s ascent. These malevolent beings try to obtain Tane’s blood in order to curse and destroy him. But Tane keeps rising up through the heavens with the aid of sacred winds—the whirlwind and the wind children, who protect and propel him higher.

Once at the summit of heaven, Tane meets the guardian gods of Io; he is purified and then honored with many sacred names. Io, of course, permits Tane’s request for the three baskets. The guardian gods give him the baskets and two god-stones, which are able to discern whether a man’s desire is good or evil.

The detailed story tells of Tane conquering evil and of his purification as he endures many divine tests during his ascent to heaven and descent to earth.

When Tane arrives back on earth, his family members Uru-ao and Tupai sound a fanfare that can be heard throughout the heavens, signaling to the gods that Tane has successfully descended back to earth. That fanfare is the first mention of the Maori shell trumpet that Tupai is said to have made.

The Maori are one of only a few cultures in the world, including the Tibetan people, who add a mouthpiece to the shell trumpet, Flintoff said. The wooden mouthpiece has its own story to tell. It is added on to the putatara because the wood comes from the land and the shell comes from the sea.

“If you go down to the beach, the land and sea are always fighting. It used to be terribly tedious fighting, but it’s calmed down a bit now apparently.

“This was the way between the gods. They said, we’ll use the wood and shell to make the instrument as a peace offering. And so the giving of gifts to make peace is established through a lovely story, and it becomes a natural part of your life,” Flintoff said.

The shell trumpet can still be heard across New Zealand as part of Maori ceremonial protocol, at many marae (Maori meeting house and grounds) and beyond. Some schools even use them instead of a bell to mark the end of school periods. Perhaps the gods continue to hear them reverberate in the heavens, too.

To find out more about Brian Flintoff and hear some of his musical instruments, visit JadeAndBone.co.nz