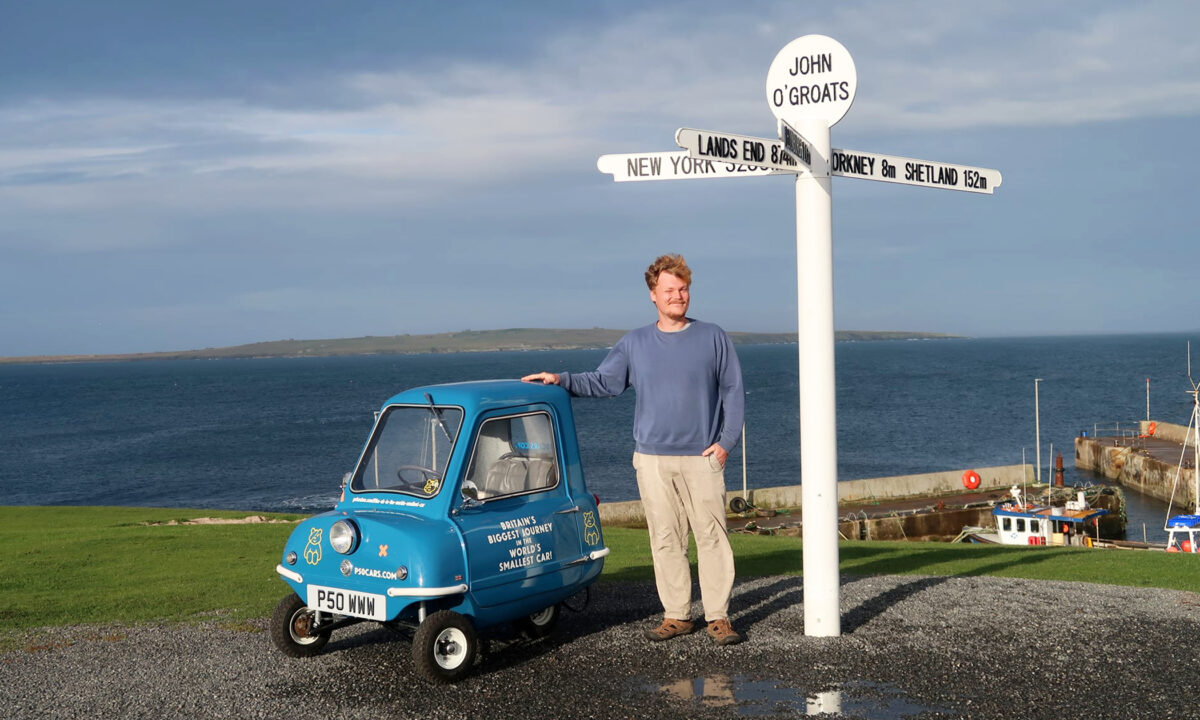 (Courtesy of ﻿Forward to the past﻿﻿﻿)
People

A British man with a passion for old and unusual cars struck gold when he found the Peel P50’s replica. After buying it, he started using the tiny car for his daily commute. Soon, the people-pleasing car became his vessel for a 1,500-mile, record-breaking journey, raising thousands in funds for a charity.

Alex Orchin of Sussex, England, became interested in the 1960s-era Peel P50 microcar back in 2005, after seeing British TV show “Top Gear” host, Jeremy Clarkson, driving one. The 31-year-old said the unusual vehicle was “just so entertaining” that he wanted one for himself.

“They’re so rare and sought-after, they can go for over £100,000 [approx. US$128,000] nowadays, so I realized I was never going to be able to get one,” he told The Epoch Times. “But years and years later, companies started appearing; one called P50 Cars, based in London, actually replicates the Peel P50, so I decided I’d like to get a replica.”

Alex bought his replica on eBay in 2018 from a man whose then-expectant wife had insisted on selling it because the tiny, one-seater vehicle was no good for a growing family.

Describing the little car, which has been listed in the 2010 Guinness World Records as the smallest production car ever made, Alex said: “I think it’s a hilarious little car. You’ve got two wheels at the front and one at the back, you’ve got a little motorbike engine, and I love the single headlights at the front. I think people love the car, and children love the car because it’s just so amusing to look at.”

Alex began driving his Peel P50 around his village, to work, and to the store, delighting passersby with the unusual sight. But soon, he started craving a bigger adventure.

Millions have traversed the full length of Great Britain, from John o’ Groats in Scotland to Land’s End in southwest England, on foot, by bicycle, or in a car, but nobody had ever made the journey in a Peel P50. Alex wanted to be the first to do so.

He set off from John o’ Groats on Nov. 13, 2021, squeezing his 5-foot-11 frame into the tiny vehicle and driving for three weeks straight.

“Sometimes I drove up to 100 miles a day, and that was really hard-going … it was pretty hard on my legs,” he recalled. “But because people love seeing the car so much, that kind of kept me going.”

Bolstered by support, donations, keen questions, and photos with supporters along the way, Alex was able to put up with several technical issues; the car’s clutch cable slipped often, and the hinges of the backward-opening door broke several times.

“In the UK it’s called a ‘suicide door,'” said Alex, “because if the wind catches it when you’re driving, it flies open.”

In the end, Alex took to driving with the door tied closed. Yet, P50 Cars had his back, following his journey and posting spare parts to his location whenever he needed them. Alex claims the car “stood up to the journey very well” overall.

Alex also made a point to pepper his journey with visits to famous landmarks. One of his favorite moments was taking his Peel P50 to the top of Blackpool Tower and driving it around the viewing deck, something no other car would be small enough to do.

He also drove a lap at Knockhill Racing Circuit in Fife, where he holds the record for the slowest lap. “That was really fun!” he said.

Reflecting on his entire journey, he said they could have completed the journey in a shorter time but they ended up stopping at a lot of places, visiting all different landmarks because they were invited.

An interactive route map and daily video logs of Alex’s trip posted online garnered a loyal audience. Fans would enquire if Alex skipped a day, hoping everything was okay, and the community spirit kept him going.

So did his end goal: not only was Alex’s record-breaking journey an adventure in and of itself, but it was also a charity fundraiser for Children In Need, a UK-based charity that fundraises annually in November, the same month as Alex’s trip.

Alex, who is brewing ideas for future projects and keeps his audience updated through his YouTube channel, told The Epoch Times: “A lot of people told me before I started, ‘You can’t do this, it can’t be done, don’t do it.’ So being able to prove them wrong, and show how much of a good time I had … it was nice.

“If you’ve got an idea, and everyone’s against it but you know that you want to do it, ignore what they’re saying, Just do it, prove them wrong, and enjoy yourself!”