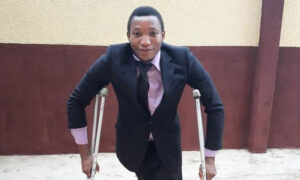 Students Called Disabled Math Teacher 'Crutches,' but Then He Turns the Tables and Inspires Them
0
Share Now
FacebookTweetParlerEmail
Copy Link 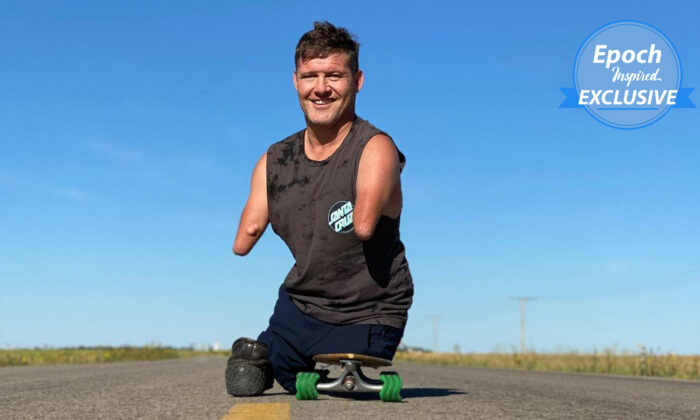 Man With No Arms and Legs Completes 10 Marathons, Shares Indestructible Motto: ‘If I Can’

There is really nothing one cannot achieve, and anyone is capable of doing something amazing in their lives if they really have the desire to.

Chris Koch, an adaptive athlete, farmer, and motivational speaker, was born without arms or legs. However, far from struggling, he thrived, making his perceived “disability” the source of inspiration for his motto: “If I Can.”

“There were obvious challenges growing up without arms and legs,” Chris told The Epoch Times in an email interview, “however, as a whole, my life was pretty amazing and surprisingly easy.”

Chris was raised on a farm in the small town of Nanton in Alberta, Canada. Everybody around him not only knew him but also was aware of his potential. Thus he was surrounded by support and never suffered from any really difficult challenges such as bullying. “The challenges were simple things like a light switch or door handle that’s up high,” he recalled.

Growing up, he was “just Chris,” having never been treated differently by his parents. As a matter of fact, even when Chris developed a burgeoning interest in sports at school, nobody wondered whether Chris was able; they simply helped make it possible by figuring out a way to do it.

Chris recalled he wasn’t really ever coddled. While he played street hockey with kids his age, getting hurt was “simply part of the game and part of growing up,” he said.

After completing his post-secondary education in Calgary and moving to Ottawa to study History and Psychology at university as well as working with The War Amputations of Canada, Chris returned six years later to work in the airline industry and agriculture field like he did while growing up, according to his website.

A few years ago, Chris transitioned from prosthetic legs to using a longboard. “It allowed me to get around faster, farther, more efficiently,” Chris explained to The Epoch Times. “That’s what made doing marathons a possibility.”

Chris sits atop his custom longboard and propels it forward using his partially developed right leg.

However, initially, marathon race directors weren’t receptive to begin with. The organizers of the LA Marathon disqualified Chris from entering with a longboard.

But he had better luck in Calgary. “In an interview for a news story, the race director for the Calgary Marathon felt that I would be able to safely participate in their marathon,” he explained. “[It] ended up being my first.”

The athlete achieved his personal best time—3:54:13—at the Edmonton Marathon in August 2019, before completing a concurrent 5-kilometer race with a skateboarder named Milania from Saskatchewan, aged 6, who was missing both her legs.

Chris has completed 10 marathons across five countries to date.

“Completing a marathon is something that lots of people have on their bucket list,” Chris reflected. “So, to say I’ve done that 10 times now is a pretty incredible feeling.”

The Kindness of Strangers

In between marathons in 2018, Chris embarked on a cross-country hitchhiking adventure that garnered a huge social media following. On day one, Chris posted a selfie from the Trans-Canada Highway, stating his mission: to get all the way to St. John’s in Newfoundland.

“I ended up having absolute strangers messaging me … offering rides, places to stay,” Chris recalled. “It was pretty cool, because the whole purpose of the trip was to highlight the kindness of strangers.”

“People are amazing!” the athlete marveled. “I feel that when you greet people with kindness and a smile, even if it’s an absolute stranger you’re passing on the sidewalk, you’ll get that in return far more often than not. … and I feel it helps people look at those with disabilities in a different light.”

As Chris’s experiences mounted and his social media presence grew, he gravitated back to a long-held ambition: public speaking. Until the pandemic hit, Chris was speaking at events internationally, and his work has since had a tangible impact.

Recalling one young audience member, Chris explained, “[She] came up to me after one of my presentations. … She told me that she had a conversation with her parents a few days prior, telling them that she was tired of living with her disability and that she wanted to kill herself.”

The limitations of her disability, however, prevented her from doing so.

“She told me that listening to my presentation helped her see things a lot differently, and she felt that the timing of me being there was divine intervention,” Chris recalled. “A few days later one of her teachers contacted me to tell me. … her transformation was incredible.”

With the current situation owing to the pandemic, Chris is spending time with his family and helping out on the farm while offering virtual presentations in between.

“The theme or motto of my presentation is, ‘If I can,’” Chris explained. “If a guy without arms and legs is able to do the things I have done, anybody is capable of some pretty amazing things.

“It has nothing to do with physical ability and everything to do with your mindset and the belief in your ability,” he asserted. “There’s an assumption that my life has been tough and full of challenges, when, in fact, it’s been an amazing journey.”