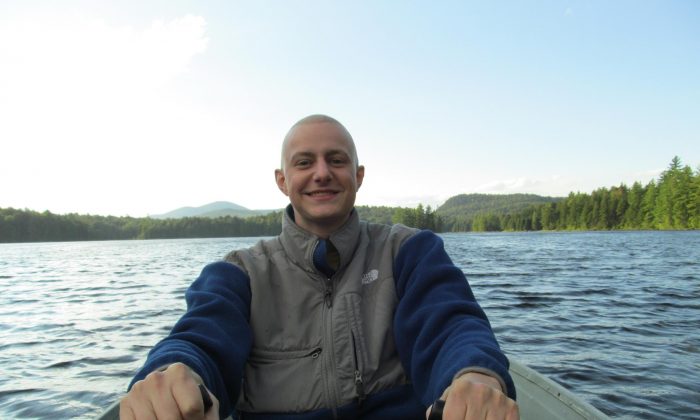 Landscape architect Kevan Busa has always enjoyed the outdoors, but a bout with cancer last year made him appreciate green space at a much deeper level. (Kevan Busa)
US

Last spring, Kevan Busa imagined he would be studying Spanish gardens. A student of landscape design at State University of New York (SUNY), Busa planned to spend his final semester in Barcelona, but a sharp pain in his right leg changed everything.

When the pain wouldn’t subside, a friend drove him to the emergency room. Blood tests showed that Busa’s platelet count was virtually depleted, and his white blood cells had risen dramatically. Further tests found that acute lymphoblastic leukemia had spread to 92 percent of his bone marrow.

“They told me I probably had a week-and-a-half to live if I hadn’t come in,” he said.

Despite the devastating diagnosis, Busa was determined to graduate on time. However, after four rounds of chemotherapy, three bone marrow biopsies, and several spinal taps, he was in no shape to travel.

So Busa discussed a unique idea with SUNY advisors: his final project would examine the healing potential of landscape design from a patient’s perspective. His observations appear in the June 2013 issue of Landscape Architecture Magazine.

Anatomy of a Healing Space

The idea that gardens can benefit the sick has had a long and robust history throughout both Eastern and Western cultures. In European and American hospitals, this belief remained strong up until the 20th century.

Busa points to Roger Ulrich’s work as a sign that the idea is returning to modern medicine. Ulrich’s 1984 study “View through a Window May Influence Recovery from Surgery,” was published in the journal Science and has been repeated multiple times. The practice is now called evidence-based design.

More than an attractive luxury, according to Busa, green space is “a sound economic investment in health and productivity, based on well-researched neurological and physiological evidence.”

“If you put somebody in a space where they will heal faster, so they get out of the hospital three days earlier than before, do you know how much money you’ll save?” he asked. “Hospital bills per night are pretty intense I would say.”

But not every garden is therapeutic, and Busa’s perspective reveals critical details that most designers overlook.

As he recovered from his bone marrow transplant at the Roswell Park Cancer Institute (RPCI) in Buffalo, NY, Busa turned his attention to the facility’s two-and-a-half acre courtyard. While this green space promises some escape from the clinical environment, Busa discovered that it did not consider patients’ needs. In fact, many of the park’s best features directly conflicted with doctors’ orders.

“I did a survey of 85 bone marrow transplant patients and they said that what they like the most about the courtyard space was the sun,” he said. “But guess what? That’s the absolute worst for you right now. I’m sure your doctors have told you that, but they’ve probably told you 50 things a day for two months.”

After the surgery, drugs, and chemo, Busa’s health was more fragile than ever. Not only was he now 200 times more likely to get a skin cancer, but his weakened immune system couldn’t even handle cut flowers in his room, much less the flurry of pollen, dirt, and fungi found in the courtyard.

“It’s aesthetically very, very nice,” Busa said. “But the question arises: is it for the patients or is it for the family and the staff?”

In his report, Busa wrote that for bone marrow transplant patients like him, “the solution may be gardens that can be experienced from indoors, through glass. This idea may not sound terribly inviting, but it is a far preferable alternative to 100 days of brick walls.”

For an example of a healing space designed with patients in mind, Busa looked to another Buffalo institution: the Richardson-Olmsted Complex, a mental asylum completed in 1890. Now a National Historic Landmark, this therapeutic design came from architect H.H. Richardson, and the father of American landscape design, Fredrick Law Olmsted.

Details of the grand complex reveal a 19th-century belief in the curative power of environment. According to Busa, it was designed to provide “benefits that no medicines can reach.”

Busa says that whether designing for a children’s hospital, mental asylum, or cancer institute, in order to be effective the green space must suit patients’ needs.

“In school they teach you to study all aspects of a site,” he said. “Well, you’re studying all the aspects of the landscape itself, but what about the culture? What about all those additional, secret, hidden factors that have massive effects?”

“It’s simple, but until you’re faced with this consideration you don’t even think about it.”