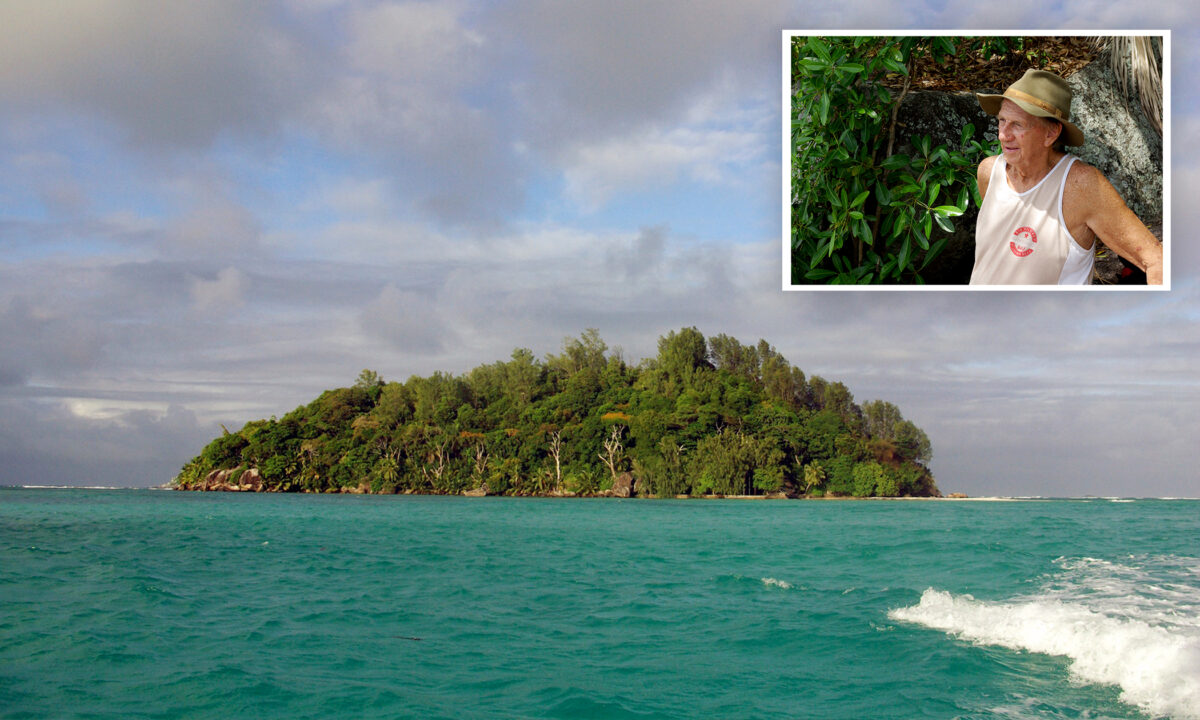 (Courtesy of The Wandering Eye via Joseph Johnson Camí)
People

Brendon Grimshaw, a former newspaper editor who was tired of the rat race, traded his success for doing something completely different and bought an island, dedicating the rest of his life to restoring its ecological habitat. Refusing a $50 million offer to sell the island, his wish was to make the piece of land accessible to all and not just wealthy millionaires. Now, this precious Seychelles location has turned into the world’s smallest national park.

“The Brendon Grimshaw story is very beautiful,” filmmaker Joseph Johnson Camí told The Epoch Times. “It should be shared at this moment, I think, because in the world right now we need some optimism.”

In 2007, Camí, who was born in North America, was reading a newspaper in Spain when he came across the story of Grimshaw and his Moyenne Island. That story really fascinated him.

“This was a man who had dedicated his whole life to restoring the ecology of an island; to connecting with it,” Camí said. “In so many different ways, was facing an interesting situation where he couldn’t even secure the future of that island.”

Grimshaw, from Dewsbury, England, had purchased the island in 1962 for 8,000 pounds (approx. US$9,826) going on to live there until his death at 87. He had previously worked as a newspaper editor in Tanzania, but due to the politics of that period, people like him were transitioning out of such roles in Africa.

“He decided to retire and do something different—radically different,” explained Camí, who went on to form a close friendship with Grimshaw. “And that’s what he ended up doing.”

In 1973, Grimshaw moved to Moyenne Island, a part of the Seychelle islands which sit in the vast Indian ocean.

When he first arrived on the island, there was no infrastructure, and Grimshaw had to bring water in. He and his closest friend, Renee Lafortune, spent the next 40 years transforming the island and restoring its habitat by planting over 16,000 trees, palms, and shrubs, building a 4.8-kilometer nature path. They even bought and bred 111 free-roaming giant Aldabra tortoises, and thousands of wild birds.

They also developed a rainwater catchment system, and by the final years of Grimshaw’s life, Moyenne had electricity.

“I think there are two phases in Brendon’s life on that island,” Camí said. “One is the one that we capture at the end of his life. And the other is, what it was like to actually live on that island before everything that he had done was in place.”

According to Camí, Grimshaw had to make do with what he had, which was a pretty intense experience at first.

“But later on, he was well taken care of, he had people who supported him, people who visited the island, people who brought him food,” Camí explained. “He was so active. He just was out there on that island every single day, and it’s what kept him alive.”

In 2005, Grimshaw was offered a whopping $50 million by a Saudi prince for Moyenne Island, but he refused.

In 2007, the future of the island seemed uncertain, as Grimshaw had no children to inherit this precious land, and hotel developers began lining up to build luxury hotels after he died. However, Grimshaw’s only wish was that the island would be made accessible to everyone and not just wealthy millionaires.

When Camí read his story and found out about this situation, he wanted to use his filmmaking skills to help. He saw this project as a medium to change the fate of the island.

“I was coming from an industry that basically was making horrible movies,” he said. “I wanted to take part in something that I thought was important. So I set out to make this project with a group of Catalan crew to see if we could use filmmaking as a way to influence reality.”

At first, Grimshaw didn’t think that a film or a story could be used to change his island’s fate. It took a conversation with Camí to open his eyes to the possibility.

“I explained that in the same way newspapers used to have the power to change reality when he was a newspaper editor, the film played the same role in our society now,” Camí said. “It was a very interesting thing for him and me to experience that together.”

“We essentially spent a month in Seychelles, going back and forth, to visit Brendon and to film with him and to film his island,” Camí added. “We gave ourselves some time to just experience the place.”

Through the making of the film, “A Grain of Sand,” Camí found his love for filmmaking, just as Grimshaw found his life for nature on Moyenne Island.

The crew also decided that they didn’t want to make the production a stressful one, as they wanted to model something that would not exploit any of them through the process and would just be used to explore more ideas using the medium itself.

Fortunately, the team was successful in changing the fate of the island, because a year after making the documentary, Camí personally sat down with members of the Seychelles government. He and his team showed the film to a presidential advisor, Jean-Paul Adam, and then to the then-President James Michel himself.

“We asked them to give the film a happy ending and give Brendon’s life a happy ending,” Camí said. “They had the opportunity to do that, and to their credit, they immediately agreed.”

In June 2008, Cami received a call that the government had agreed. An agreement had been made, and Moyenne was declared a national park, the smallest national park in the world. While neighboring islands were becoming playgrounds for the rich, complete with luxury resorts, Grimshaw’s was to be a protected, precious pearl.

“The Seychelles government was so beautifully responsive to us,” said Camí. “Often, there’s this thinking that smaller, less developed countries do not care about their environment or not taking care of things in ways that the West does. This is entirely not true.

“What I found is that there were people who deeply cared about the future of Seychelles.”

Camí broke the news to Grimshaw on his porch and will never forget that special moment, as he was overcome by emotion.

“When I told him that the government had agreed Moyenne was going to become the smallest national park in the world, he cried with joy,” Camí said. “It was a moment that I will never forget.”

For Camí, it was all the more special, as later, the two friends were able to sit together and rejoice in the work Grimshaw had done in his life, and the work he and all his film crew were able to do to tell his story.

It was even more special that the story was used as a mechanism to create something beautiful, something he believes, “none of us will ever forget.”

“It’s hard not to believe in fate sometimes when you hear these beautiful unfoldings and how significant they end up being,” Camí said.

The story of Brendon Grimshaw and his island can be viewed at: thewanderingeye.net.

(Courtesy of The Wandering Eye via Joseph Johnson Camí)