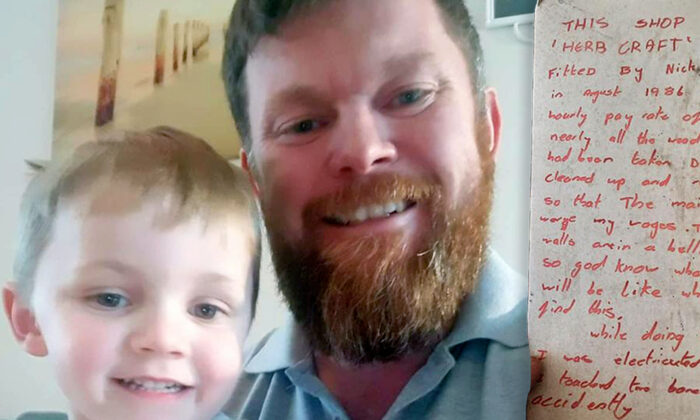 A man found a note left in his shop wall 35 years ago by a builder saying he’d gotten an electric shock working there—written on the back of an electricity safety notice.

Daniel Bodman, 39, was renovating an old building in Devizes, Wiltshire, England, when he discovered the letter written by “Mr Nicholas Poole” in 1986.

Bizarrely, the message was scrawled on the back of a “Treatment of Electric Shock” poster, complete with pictures of how to do CPR.

Daniel was transforming the place into a new showroom for his masonry business Market Town Memorials.

He was in the middle of taking some cladding down when he noticed the folded poster on the wall.

“It makes an interesting little read, and had made us chuckle with what he had [written] it on. It would be interesting to find him,” Daniel said.

“While doing this job, I was electrocuted because I touched two bare wires accidentally,” Mr Nicholas Poole had written.

The full handwritten note read: “This shop ‘Herb Craft’ was fitted by Nick Poole in August 1986 at an hourly rate of £2.00.

“Nearly all the wood fitted had been taken down, cleaned up, and reused so that the main costs were my wages.

”The store walls are in a hell of a state, so god knows what they will be like when you find this.

”While doing this job, I was electrocuted because I touched two bare wires accidentally. Nicholas Jo Poole.”