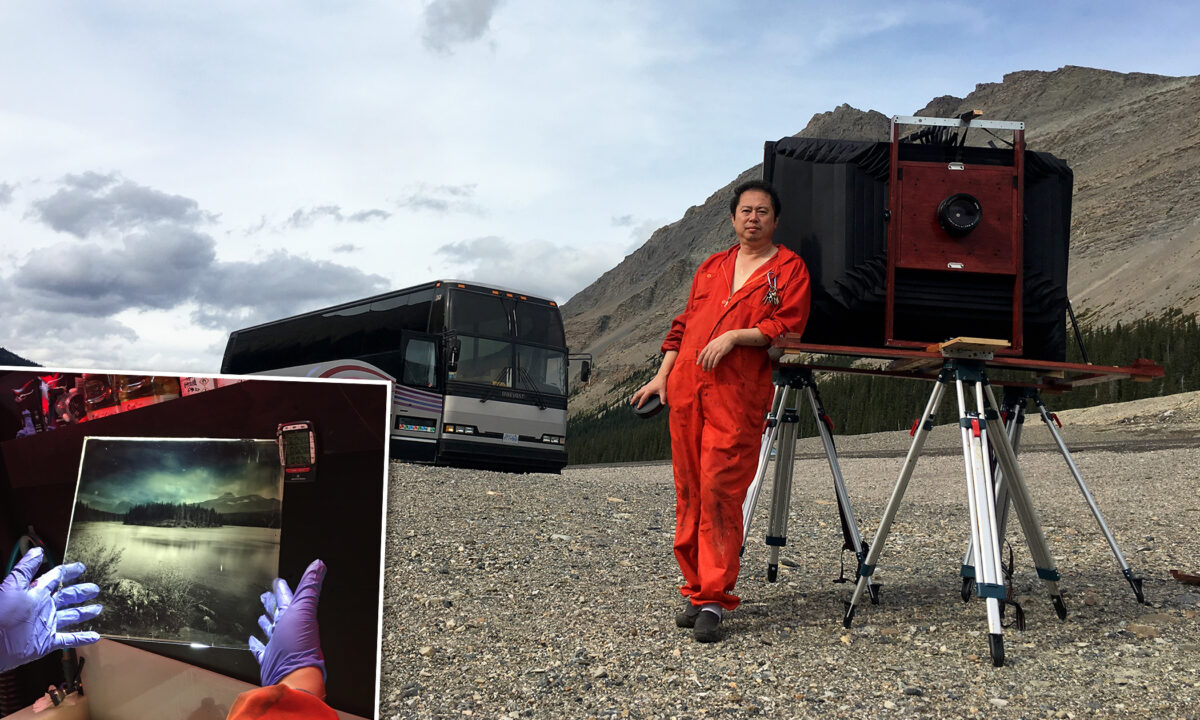 When a man with a penchant for the old-fashioned art of wet plate photography decided to size up but stay mobile, he spent two years building a massive 32-by-48-inch camera frame and portable darkroom on a bus, to make his dream a reality.

Chinese-born Bill Hao, 49, immigrated to Canada in 2002 and lives in Vancouver, where he runs a travel company with his wife.

Hao made his first foray into photography as a 16-year-old middle schooler. He set up his first makeshift darkroom in the family bathroom and used his pocket money to buy the cheapest materials available.

He discovered wet plate photography in his early 40s, a technique invented in 1851, and never looked back, lauding the process for its “very rich tones and a very clear picture.”

He built his first mobile darkroom in a wooden box to use with an 11-by-11-inch wet plate camera in 2015, which took him about two months.

“Later, I bought a 7-seat Dodge caravan, removed the back two rows of seats, and transformed it into a smaller darkroom car [over eight months],” Hao told The Epoch Times. “I used it to take hundreds of glass shots and accumulated a lot of experience.”

According to Hao, most of the wet photos in the world revolve around portraits or still life and only a few people take landscapes and even fewer people take large-scale landscapes because it’s not just the equipment that is difficult, it’s hard to even shoot it technically.

In 2019, Hao, who loves going off-grid for photo shoots in the nearby Rocky Mountains, decided to rig a bigger system to achieve bigger photos; he thus converted the largest and tallest bus in his company’s fleet into a mobile darkroom.

“Wet plate photography is limited by several conditions,” he explained. “The first is that the positive film process cannot be enlarged or copied … if you want larger photos, you need a larger camera.

“The second is that the negative must be made on-site and exposed and developed before it dries. Once dried, it will be invalid, hence the name ‘wet plate.'”

Meanwhile, the third, Hao explained, is that most of the process needs to be done in the darkroom; therefore, if one chooses to leave the house and go outside to shoot, one must bring a mobile darkroom with them. He also added that there is the need to prepare a large number of chemicals and containers to hold them in the darkroom, and they are all liquid.

Having majored in computer science in college, Hao made his own calculations and built the biggest camera he could fathom fitting on the bus; the glass plates and body of his camera weigh 110 pounds, the lens and film holder adds an additional 44 pounds, and each of the three tripods weighs 22 pounds. The folded camera must be able to fit into the luggage compartment of the bus.

“I wish they were as big as possible, but there are too many things that restricted me,” Hao said.

Hao stressed the importance of processing after shooting, which is the process of removing sodium thiosulfate from the wet plate on-site after taking a photo. He explained that failure to do so can mean the photo starts to degrade and change color, making it impossible to preserve it for more than 100 years.

He shared that he’s seen some wet photos change color even after 5–10 years. In his case, however, his bus can carry 700 liters of clean water, and he only shoots one wet plate a day. “After which, I make my coffee and spend hours working on processing the sodium thiosulfate,” he said.

Building a darkroom on a bus has meant not only Hao being on the road, but also a very special companion: his wife.

“When I go out to shoot, my wife will accompany me and endure the hardships of traveling. It’s very hard!” he explained. “So this bus is not only a darkroom, but also an RV; it has a separate bedroom, living room, kitchen, and two bathrooms.

I also kept almost all the glass windows, so we can see almost 360 degrees of the scenery.”

Hao shared that he’s usually taking wet photos all the time and is always in the process of creating them. However, he shoots the Rocky Mountains once in each the spring and the fall.

“Last year, I came here between September and October, and this year, at this time, I am shooting in the Rocky Mountains,” he said.

He is currently focused on shooting the stunning scenery and historical changes of the Rocky Mountain scenery that he knows so well, having hosted tourists for 16 years.

“Countless scenic spots present the effects of human progress and natural regression,” he explained. “I often wonder if my wet plate photos will last for at least 200 years, but will the beauty in this photo still be there?”

Through his craft, Hao hopes his works can awaken people’s reverence for nature, now and in the future. He also hopes it can prompt people and governments to cherish and protect the natural environment that we all still live in.

According to Hao, shooting these amazing series of wet photos hasn’t come without challenges.

In the beginning, a lack of information held him back.

Hao learned mainly through trial and error and claims the biggest challenges he faces today are “skyrocketing oil prices” and the “ever-changing weather” in the mountains.

He currently shares his incredible process and favorite works on his Instagram page, where fans have hailed his work as “amazing,” “stunning,” “unreal,” and “sublime,” even describing the photographer as “the king at work.”

Hao’s love for wet plate photography has less to do with achieving a technically perfect photo—for this, he would defer to digital photography—and more to do with harnessing his physical and chemical knowledge, and artistic literacy, to be involved in the entire process of a photo.

He is committed to creating more and better works and improving his equipment. He also hopes his photos have longevity, claiming, “I hope they can impact people in 100 years’ time, so that people can feel the excitement of an ancient man like me in these moments!”