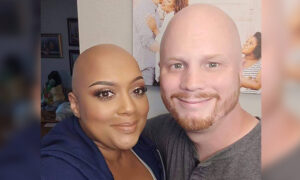 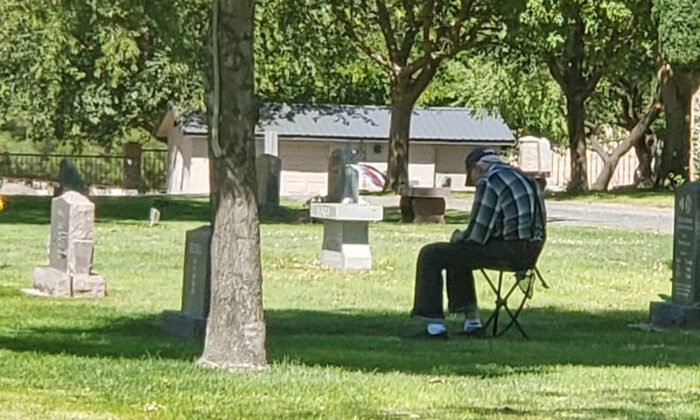 Man Approaches Lonely Veteran by Late Wife’s Grave: ‘There a Great Number of People That Care’

While visiting his mother-in-law’s grave in Toquerville, Utah, a man was moved by an elderly mourner who was visiting his late wife. The pair shared a brief but poignant encounter.

On Sept. 14, the four-year anniversary of his mother-in-law’s death, Erik Largin accompanied his wife to the graveyard. Before long, they witnessed a frail elderly man get out of his truck with a chair in his hand.

“I told my wife that’s how I hope we are (getting old together), and if she goes first I’d be visiting her the same way,” Largin regaled on a Facebook post later that same day.

The elderly man placed his chair by a gravestone and Largin took a picture from afar, wishing to preserve the precious moment. He then decided to approach the mourner to ask how he was doing.

“I could hear him speaking to [his wife] and that he missed her. I apologized for interrupting,” Largin recalled. The man, who was an 86-year-old Lee, had lost his wife in February and was feeling lonely and old.

Lee, a U.S. Navy veteran who served two tours during the Korean War, told Largin that he had lived for some time in Southern California working in the movie industry before relocating to Utah. He later retired from the aerospace and defense company Northrop Grumman.

He and his late wife’s five children did not live close by, but Largin managed to ascertain that one daughter is a dentist and another is a chiropractor in a different state.

Largin, who was moved by what he witnessed, shared with The Epoch Times via email what prompted him to approach the elderly man later.

“My wife and I believe in having a loving, dedicated, and strong marriage that will bind and keep the family together,” Largin said. “[N]o one is more loyal to you than your own family.”

“I went over to [Lee] because I figured he was grieving and felt compassion for him,” he continued. “I and my wife have lost parents and grandparents, and know that the death of loved ones can be depressing.”

Largin remembered a moment of levity, however; Lee had paused to tell him that he looked like Patrick Swayze.

“He told me that the place he was sitting at was his plot next to his wife, and he is waiting to go there,” Largin said as the conversation between the two men continued. As for Lee, Largin believes that “I think he enjoyed sharing some time, as he opened up to talk about family to me as I just listened to him.”

Then after 10 minutes, Largin left the man alone, but not before thanking him for the inspiration to be a better husband through his demonstrative devotion to his wife.

Largin has not been in touch with Lee since their encounter at the graveyard, but he has been told that Lee’s children have seen his social media post and are checking in on their father’s well-being. Largin is grateful to everyone who sent prayers and helped locate Lee’s family, maintaining that we all have a duty to watch over one another.

“The thing I have learned from this is that there are lonely people out there,” Largin concluded, “ones that are grieving as he is, many sharing his experience.” However there are, he countered, “a great number of people that care.”