'Melbourne is the best place to catch this show' 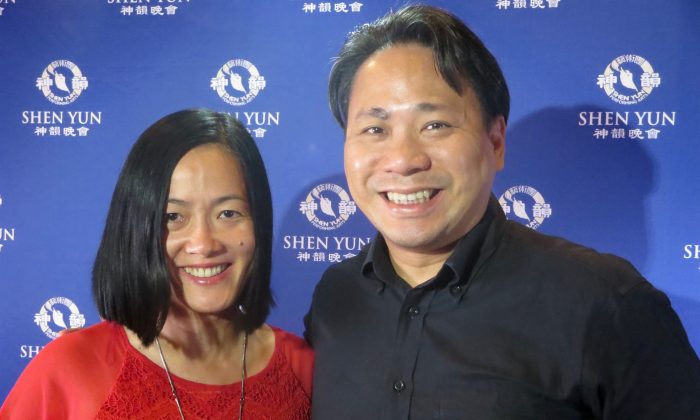 Edelweiss Ooi and her husband love Shen Yun so much they flew from Malaysia to Melbourne to catch the Feb. 23 performance at the State Theatre. (Courtesy of NTD Television)

MELBOURNE, Australia—Edelweiss Ooi and her husband flew from Malaysia to Melbourne, Australia just to see Shen Yun Performing Arts in the World’s Most Liveable City, she said. Her friend in Malaysia had introduced them to Shen Yun and since then they had wanted to see it. They were sad Shen Yun did not tour to Malaysia, so they had tried to catch it all over the world before deciding “Melbourne is the best place to catch this show.”

Ms. Ooi is grateful that Western countries like Australia, so many cities in Australia, have Shen Yun.

Ms. Ooi works in the banking industry in Malaysia and said they both just loved Shen Yun.

She said at home they have the opportunity to see many Chinese performances but Shen Yun was something special. “This is really different. And we really enjoyed ourselves, really … it just took my breath away.”

Based in New York, Shen Yun was formed in 2006 by a group of leading classical Chinese artists coming together in New York with one wish “to revive the true, divinely inspired culture of China and share it with the world,” according the website.

“Shen Yun draws top artists from around the world. With a passion for the classical arts, they join Shen Yun in its mission to revive a culture that was once almost lost.”

There were so many reasons why Ms. Ooi thought Shen Yun was so special. “I think the grand scale of it. It’s just so … I can’t describe it. You just got to see it for yourself,” she said.

The costumes are “just so colourful. It’s not something that you expect.”

Malaysia is quite multicultural and has a very international flavour, she said; they have people from all parts of the world, and they get a good understanding of Chinese culture. However, Shen Yun touches the heart of true traditional Chinese culture spanning the millennia.

“We read, the cheongsam(a body-hugging one-piece Chinese dress for women), and we have the Chinese drum and all those. But this is like putting in the dances, the culture, a little bit of their [spirituality], and the country, and all pieces [of] it together,” she said. “Here, you’re able to grasp the details of the Chinese culture, and it’s something which you want to know more” about.

She appreciated the choreography that brought the ancient legends to life and guessed that the books of legends must stack very high. But Shen Yun has them choreographed into two and a half hours that felt like a few minutes yet showed so much.

“So when you see things of Chinese culture like that, it just tells you what you’re forefathers or your original roots, what actually happened before … it’s something that … creates the awareness, and makes you more knowledgeable.”

She said she would like to see Shen Yun many, many times.

Ms. Ooi felt it was a pity Shen Yun had not toured to Malaysia and hoped it would soon. It was sad that it was unable to go to China because of the communist regime’s systematic campaigns like the Cultural Revolution bent on uprooting traditional beliefs and destroying ancient treasures, bringing the traditional civilization to the brink of extinction.

The website states, “China was once known as Shen Zhou—The Divine Land. This profound name describes a land where deities and mortals coexisted, and a belief that the divine transmitted a rich culture to the people of the earth.”

Ms. Ooi said that we need to have freedom of belief—to believe in what spiritual path “teaches us to do good. And we should respect diversity. I think diversity is the key, we must respect the individual, as long as it’s meant to do good—for the betterment of the world, this is something we should all support.”

She wanted to thank Australia for hosting Shen Yun.

“You know, I just really enjoy myself very much. Thank you Australia. And thank you Shen Yun.”