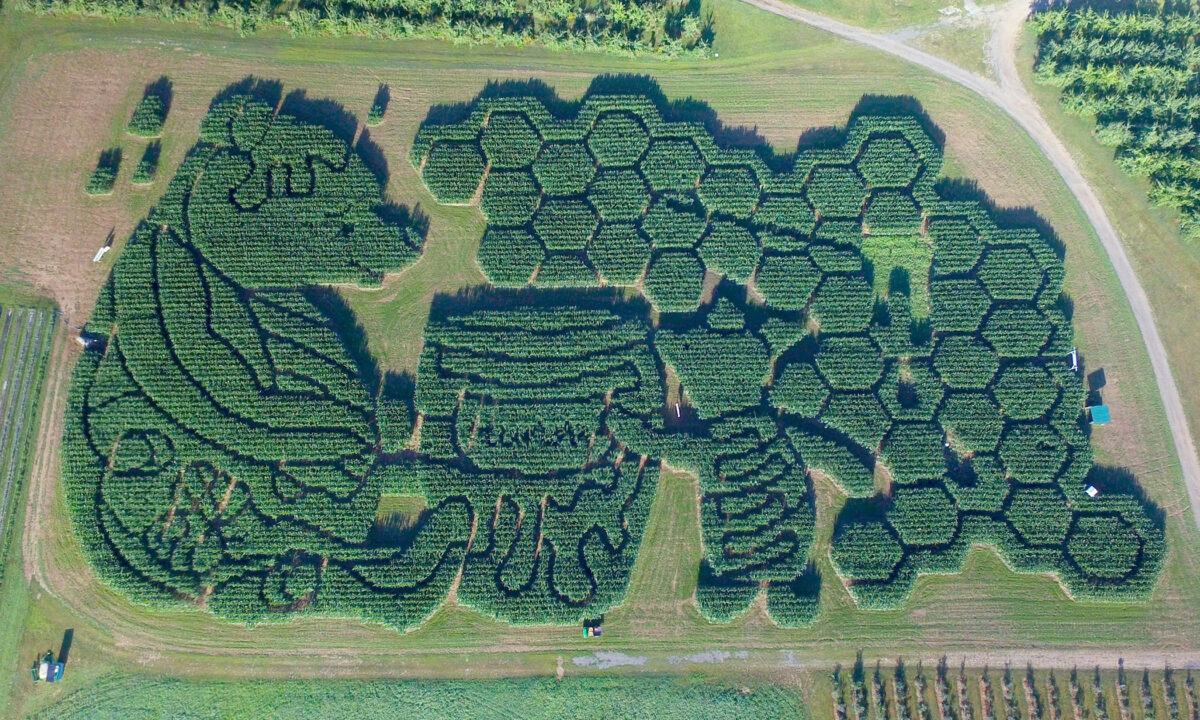 Corn maze attractions have been booming in the United States, with each creation being incredibly unique and complex. This year, one family, who owns the longest-running maze in Maine, chose to delight visitors with a stunning theme: Winnie-the-Pooh.

“This is our 22nd corn maze,” Jonathan Kenerson, owner of Treworgy Family Orchards in Levant, told The Epoch Times. “We wanted a maze design that would delight our guests, but also honor the original bear and his friends from the hundred-acre wood.”

According to Kenerson, this year marks the 95th anniversary of A.A. Milne’s book, which means that the beloved bear has passed into the public domain.

“This makes possible all sorts of creations such as a corn maze without having to jump through complicated legal hoops,” he explained.

The intricate maze is made from more than 60,000 corn plants and it’s taken a lot of planning for it to come alive.

“Each design is a team effort with initial compositions and back and forth feedback,” Kenerson said. “We have a wonderful team that made it happen.”

Talented agricultural manager Kat Jenkins led the design, forcing the images and ideas onto the constraints of the actual field dimensions.

Meanwhile, agricultural director Matthew Pellerin was in charge of layout, planting, and cultivating; and graphic designer Josh Alves contributed the graphics, trivia, and game within the maze.

Explaining more about the maze, Kenerson said that it takes about 45 minutes to complete it and each participant is asked to keep on the trails and not touch the corn, since they want to maintain it for future guests.

“The public’s response to the Winnie-the-Pooh corn maze design is one of the most enthusiastic we’ve ever experienced,” Kenerson said. “The beloved bear and his friend Piglet fit right in here on the farm.”

It’s rather a slick operation these days, which all started years ago when Kenerson’s in-laws, Gary and Patty Treworgy, went on a trip to New York to drop their eldest daughter off at college and came across a farm with a corn maze.

“Not many places were doing this,” Kenerson said, “and they thought, ‘we could figure out how to do that.’”

The following year, the family planted the first maze on their land, painstakingly figuring out how to create paths with surveying equipment, tape measures, lines, and lime.

“Over the years, we’ve improved our methods and refined the craft, but we still design and layout the mazes ourselves using old-fashioned surveying equipment,” Kenerson explained.

Treworgy Family Orchards was established four decades ago when Gary and Patty dreamed of starting a pick-your-own farm. During that time, Gary had a job with the Merchant Marines, which kept him away from home for months at a time, and the couple wanted to generate income while being able to work with their kids.

“Neither of them had any farming experience, but they bought some land, planted some apple trees, and worked other jobs for decades before the farm became self-sustaining,” Kenerson said.

Almost 40 years later, the second generation is leading, and three generations—along with many friends and family—are involved in welcoming tens of thousands of guests annually to experience agriculture.

Over the years, their corn maze creations have won first or second places in USA Today’s 10Best Corn Maze competition. The winning designs include a ship, a bear and a girl from the book “Blueberries for Sal,” Wilbur the pig from “Charlotte’s Web,” Paul Bunyan, a knight fighting a dragon, and more.

Kenerson also shared that seeing people leave with a smile after a visit to the farm picking apples or berries, feeding goats, and wandering through the maze is the best feeling and makes it all worth the effort.

Standing true to their mission, the family has also been connecting people together in community, to the land through agriculture, and to God through those experiences.

“We’re delighted to provide opportunities for families to spend time together, creating memories, and actually getting close to nature, and farm life,” Kenerson said. “Being able to work with friends and family to create a piece of art that brings joy to so many people is truly a blessing.”

Corn Mazes From Past Years: