Magical Things Happen to People Who Have Goodness in Their Hearts 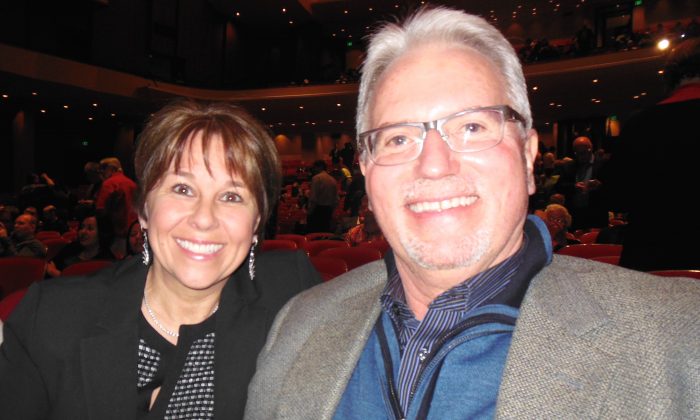 Audience members at the Keller Auditorium were taken on a breathtaking journey through China’s beautiful landscapes and rich history on Friday evening, as Shen Yun Performing Arts started its four-show run in Portland on March 27.

Mark Peterson praised “the colors, dancing and the great stories.

“I like the history that goes back, the dancers are obviously very talented and work very hard,” he said.

“Chinese dance is at the heart of what Shen Yun does. Known for its incredible flips and spins, and its gentle elegance, it is one of the most rigorous and expressive art forms in the world”, says the Shen Yun company’s website.

Ms. Brayant said that they had visited China a couple of months ago and that watching Shen Yun gave them a chance to take a look “at the talent that comes out of China and … the storyline and the history that’s associated with that.”

Kathy Brayant realized that Shen Yun performance is about spirituality and not necessarily is connected with what you believe in.

“It doesn’t have to be a God or a Buddha, … it’s about being spiritual and believing in something,” she said.

Being a fine art photographer, Ms. Brayant appreciated the costumes and colors of Shen Yun’s costumes. “The costumes are just gorgeous; the colors are so brilliant—I really have enjoyed that very much,” she said.

Shen Yun’s costume artists use bright colors to tailor and recreate hundreds of new costumes each season. “The designers stress harmonic balance and contrast. Their objective is an authentic presentation of the attire that comes from China’s divinely inspired traditional culture, and a consummate stage effect, “reads company’s website.

Ms. Brayant said, “All of the women’ s costumes are … putting green with pink together, something that most of us never do … that I would not expect to see together. [It] was tastefully done.”

The mission of Shen Yun is to revive authentic Chinese culture. In the program, audience members are invited to “Prepare to enter a magical realm of beauty and purity, a place where goodness always prevails and legends come to life.”

Dr. Peterson particularly enjoyed a piece called The Fable of the Magic Brush,a story about a kind-hearted painter who is given a magic brush that turns anything he paints into reality.

Ms. Brayant said that acceptance of diversity of cultures is very important. “I think that in the American society, in particular, people are stereotyped and different cultures are treated different ways because people don’t really understand them and so I would hope that [people] could just accept the differences and embrace them.”

Ms. Brayant was impressed with the backdrops, which turned out to be interactive, which she did not expect. “I think that’s very clever,” she said.

The backdrop provides striking scenery that extends the stage and at times interacts with the dancers on stage, bringing the audience into the story and enhancing the storytelling.

Besides enjoying the costumes and dance, Ms. Bryant also took away a message of compassion from the dance story The Power of Compassion, which is based on true events taking place in modern China.

Falun Dafa meditators are suddenly attacked by communist police and severely beaten. But when an officer hurts his knee during the attack, Falun Gong practitioners stop trying to flee and help the policeman.

Most of us would give up on him and they didn’t and I find that touching that they continued to help someone who continued to be angry and unkind.”

At the end, moved by their compassion, the officer comes to regret his actions, leading to an unexpected blessing. This was the power of compassion, Ms.Brayant concluded.