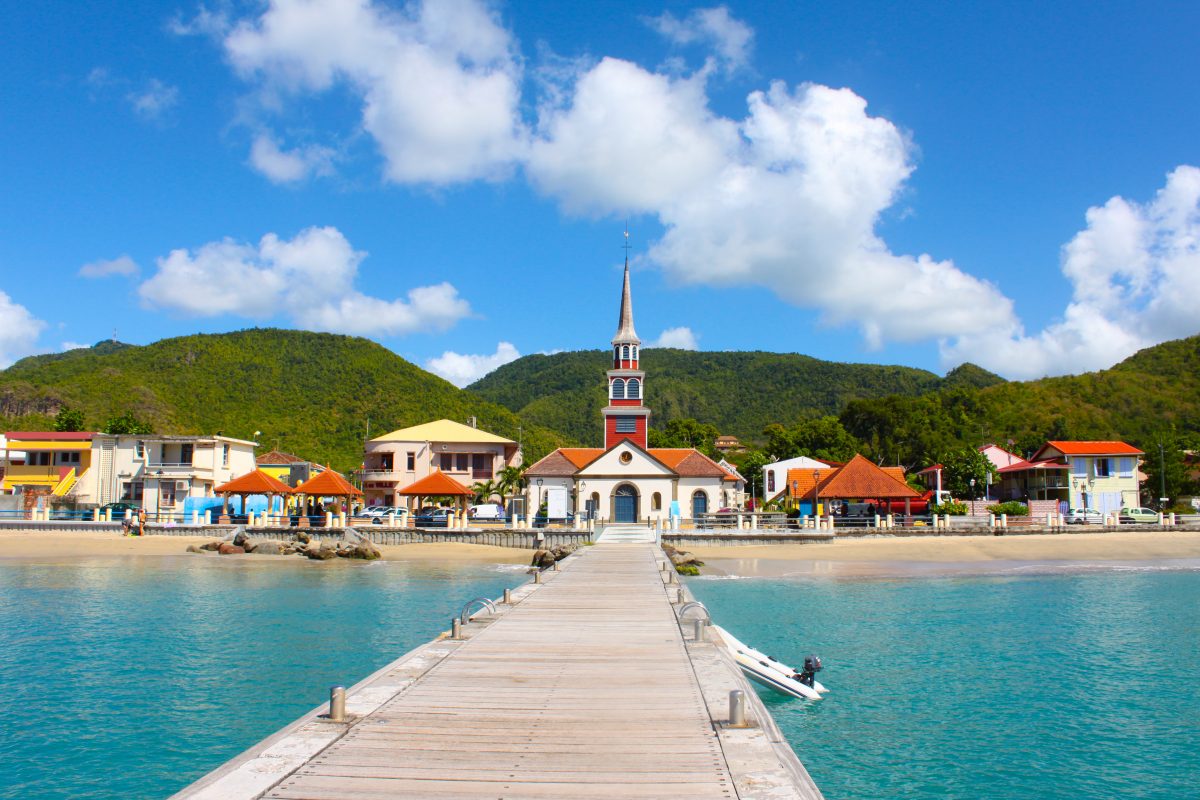 Anses d'Arlet is a very small fishing village located on the side of the Caribbean ocean. (Antoine Omere)
Travel

Celebrity seekers already know that one French island in the Caribbean gets all the attention during the holiday season, but don’t let glitz get in the way of a more rustic and laid-back experience on an equally fabulous French island called Martinique, which is roughly six times the size of Washington, D.C.

If you’re a Francophile looking for beaches and vistas, combined with year-round value, that are off the gossip radar, then let Martinique beguile all your senses. There are more than 80 miles of hiking trails that show off the island’s beauty, which include fragrant flowers, lush botanical gardens and landscapes, a rain forest, and a towering mountain.

A rich, exotic gastronomy that is heavily influenced by French cuisine makes a visit double the pleasure. Since becoming a French protectorate a few centuries ago, Martinique has an eclectic history, including a slave population that was baptized Catholic and then freed in 1685 by King Louis XIV. All of this makes Martinique a memorable destination with French flair and Creole traditions like music and cooking with local ingredients.

More than 350,000 inhabitants live on Martinique. The majority of them speak excellent French and Creole (now recognized as an official language of the island). The topography of Martinique is rugged landscapes on the northern side of the island and the rocky hills and white sandy coves on the southern side of the island. In the north, Mount Pelée, a 4,500-foot-high active volcano that erupted in 1902 and decimated the then-flourishing city of Saint-Pierre, is always majestically visible. The range of mountains called the Pitons du Carbet, which hide the rainforest, is always visible. In the center of the island, mangrove swamps prevail and show off their above ground roots.

What nationality best characterizes Martinique? The culture is a mash-up of French and Caribbean people, giving way to Creole. Before the French or African pioneers arrived, natives from South America called Arawaks settled there in 100 A.D. Caribs, people from neighboring islands, overran the Arawaks in 1,000 A.D. Christopher Columbus was welcomed by Caribs when he arrived in 1502.

In 1635, the French arrived and took possession of the island, turning it into a source of economic strength—setting up plantations for sugarcane, bananas, and pineapple. Slaves were brought to the island to provide the labor force, but the French outlawed slavery in 1848. In 1946, Martinique was declared a department of France, giving its citizens the right to vote in French elections.

Martinique is a well-run island populated by well-to-do inhabitants driving French cars and passionately running businesses that provide jobs at local rum distilleries, banana and cantaloupe melon plantations, as well as boutique hotels, restaurants, and cultural attractions. Islanders are educated the French way (they earn a baccalaureate degree). Perhaps most importantly, the citizens are very aware of preserving their natural terrains and avoiding the pitfalls of over-development of some of their neighboring islands.

Tourists draw mainly from France and Canada, but there are also travelers (not many Americans though) keen on French tastes and traditions. I’d like to point out that at least four gigantic Carrefour supermarkets (the French version of Walmart, if such a comparison can be made) can be found on the island, offering cheese and charcuterie to rival any fine gourmet take-out establishment in Paris or Lyon.

Everything on this island is French, from the road signs to rotary circles, license plates, supermarkets, and cars. I swear I ate the best baguettes (the iconic skinny loaf of bread), croissants, and pastries outside of the motherland during this visit. One patisserie in particular called Coup d’Coeur that I visited at the Village de Poterie (Pottery Village) in Trois-ilets had a staggering array of exquisite tasting and looking pastries to win a culinary award.

For all the French-ness with food and wine, Martinique does get down and party. While my visit didn’t coincide with Mardi gras, you can bet your beads that their celebration is colorful and joyous. Locals told me that the whole island comes together to parade, party, and feast.

A new and lively addition to the party circuit is a two-day Festival Martizik, which brings out international performing artists to multiple stages on the beach and really resembles a French version of college spring break; scores of fit and tan revelers dressed in board shorts (Speedo swim suits are a definite no-no) and bikinis drinking magnums of Moët et Chandon Champagne, as I witnessed recently. This is, after all, a French island with French tourists and French citizens.

But let’s get to the daily routine of what to do once you’ve landed on the island. You will need a car to get around. This is not a scooter friendly island. There are traffic jams, but getting around the island’s many different towns, cities, and coastline beaches for sunbathing and snorkeling is rewarding.

If you’d rather stick closer to your hotel for all your water activities like fishing, diving, snorkeling, sailing and wind surfing, then there are a couple of all-inclusive resorts from which to choose. Sooner or later, venturing out to discover the diversity and culture of the island is a must, so consider renting a car or hiring a guide for a day trip to discover the Balata botanical garden; the Village de la Poterie, where local artisans throw clay pots; Clement rum distillery and La Pagerie Museum, the birthplace of Empress Josephine, to name a few.

The island’s 10-rum distilleries were recently awarded the French government designation as an Appellation d’Origine Controlée, which is the same labeling that is applied to French wines. Like the wine, rum is aged in oak barrels. So when you’re tired of the beach, visit one of the local rum distilleries like Clement, which offers a broad historical perspective including a palm tree garden, a fully restored rum factory and distillery, a restored estate house, floral gardens, a tasting room, and a very well-designed cultural foundation that recognizes local artists with exhibitions at the distillery’s art gallery.

For real local colors and flavors, head to the covered market in Fort de France, which is a feast for the eyes and the senses. Tropical fruits, local spices, rum punches, straw hats and baskets are some of the colorful temptations awaiting you, as well as the locals dressed up in colorful madras outfits. Make a stop for lunch at Chez Carole, one of the market’s casual restaurants where a chic and svelte Chef Carole prepares daily specials using fresh ingredients from the market, in addition to the ubiquitous starter—fried codfish balls.

Traveling to Martinique just got easier with a new, direct flight from Miami on American Airlines, which will give Martinique a much needed boost and better visibility. In addition, in the coming months, a trolley will connect the newly renovated airport with the main city, Fort-de-France.