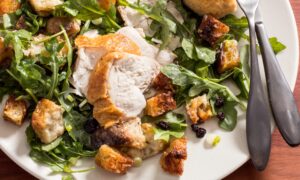 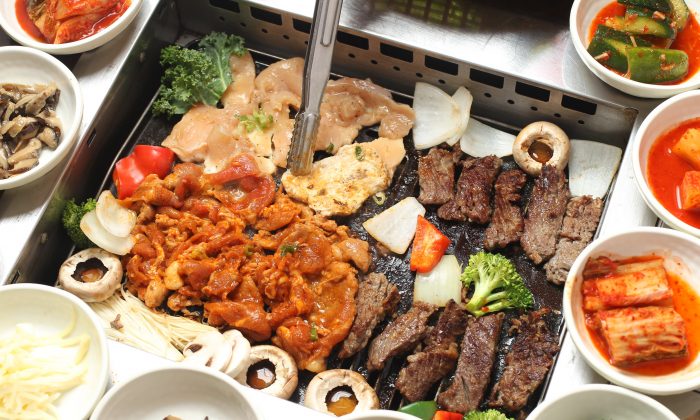 Korean barbecue, with an assortment of side dishes, or banchan. (Epoch Times)
Food & Dining

Madangsui, a Koreatown spot on 35th Street, is especially well known for its Korean barbecue, where an incredible variety of meat is grilled directly at your table.

At last glance, the cuts to choose from varied from Chadol Baegi, ultra thin USDA prime cuts of brisket that cook virtually on contact with the grill ($24.99); Saeng Galbi, fresh butterflied short ribs ($31.99); and the ever popular Bulgogi ($27.99), marinated thin sliced boneless rib eye—and that’s not to mention cuts of pork belly and seafood.

It’s a little pricier than other Koreatown spots, but it also translates to higher quality. That’s rare in a neighborhood where other Korean restaurants often go for cheaper ingredients. Tourists are constantly coming and going, so there’s not necessarily extra effort made to keep people coming back.

It’s different at Madangsui and a few other spots, where more care is put into the quality, especially the barbecue. It even has barbecue that’s not marinated (like the Saeng Kalbi) for those who prefer the taste of their meat unmasked by marinades.

Overall the meat is tender, flavorful, juicy—even, incredibly, when at my table, some of it had been requested well done.

The fun part begins after the meat is grilled at your table.

The drill is the following: grab a piece of lettuce, paint it with a smidgen of ssamjang—a fermented bean paste—add some rice, roll it up, and pop it into your mouth. The point is, these lettuce wraps lend themselves to customization. It’s as much about fun and making these your own—there are no hard and fast rules.

The ssamjang is the traditional sauce you’d use, but as Korean friends told me, you can really use any of the sauces available. There was also a savory-sweet one to accompany the seafood combo we’d ordered, and a simple sesame oil sauce with a bit of salt added.

Wrap away; the lettuce leaf basket gets refilled as you run out.

A Korean dining companion told me that during his military service, he was given the task of cleaning the lettuce leaves in preparation for certain military dinners where barbecue was on the menu. The leaves were soft and pliable, and so it took some effort to scrub the dirt from each leaf. “Each leaf is so precious to me,” he said, reminiscing about the times. He always held out the hope that people wouldn’t want their lettuce baskets refilled.

Besides meat, rice, and sauce, you can also add in whatever you fancy from the variety of small dishes that are a big highlight of any Korean meal. As soon as you get to the restaurant, these small plates suddenly materialize all at once—pickled turnip, daikon radish, kimchi, crispy seaweed, and so on. They are often quite bold and pungent, with some heat to them, and are good to cut through the fattiness of the meat when you need it.

Madangsui has a super bright interior (and hence maybe not the perfect place for dates if you’re looking for something more intimate). But it’s perfect if your sole focus is food, and having a good time. Other highlights of my meal were the egg custard, with the consistency of a what a cloud may feel like to munch on; seafood pancake ($10.99), which had perfectly crisp edges, and wasn’t greasy; and Dwen-jang Jigae, a bean paste soup, with a pronounced depth and earthiness from the fermented beans paste.

Besides its Herald Square location, Madangsui also has a location in Fort Lee, N.J.