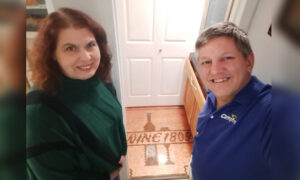 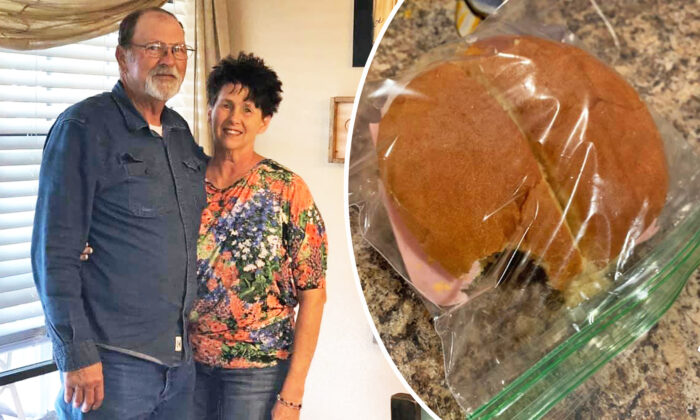 A loving wife who frequently sends her husband to work with a sandwich that has a bite taken out of it has shared her reason why on social media. The anecdote is now warming hearts around the world.

Texas native Tracy Howell, 56, lives in the town of Leonard with her husband Clifford, 63.

“I had been fixing his sandwiches and taking nibbles for years,” Tracy told The Epoch Times via email, “so maybe God thought the world needed to hear our little story.”

On Dec. 2, 2020, Tracy shared a photo of her husband’s packed lunch on Facebook alongside her touching explanation. “Clifford and I have been married almost 41 years and I have made his lunch every working day since day 1,” she wrote. “On occasion I would join him on the job site and have lunch with him.

“He made the comment once that lunch tasted better when you share it with someone you love,” she continued. “Soon after that, while fixing his sandwich one night, I took a bite out of it before putting it away.”

When Clifford returned home and commented on his unusual lunch, Tracy replied, “I told him that since I couldn’t join him for lunch, I took a bite so he knew I was joining him.”

Unless it’s tuna or pimento cheese, she admitted, she still takes a bite to this day. “And he still says, ‘Saw you joined me for lunch today and it sure was good,'” she shared.

Tracy has been an elementary school secretary in Leonard for 34 years and loves her job. Clifford worked most of his life for the water department, before operating heavy equipment for Collin County. He took early retirement after the couple experienced a house fire in 2006, but has since found part-time work. He has now been working as a transportation mechanic for the last five years at Tom Bean ISD.

He’s not good at being idle, says Tracy.

The couple first met at a New Year’s Eve get-together that was organized by Tracy’s church, at her best friend’s house. She was 15, Clifford was 22, Tracy reflected. The next day, and every day after that, Tracy began to notice Clifford’s truck around town.

Just two weeks after the two of them met on New year’s eve, Tracey and Clifford went on their first date.

After some small talk and getting to know each other at a drive-in movie theater, Clifford turned to Tracy and uttered an extraordinary statement. “He so seriously looked at me and said, ‘You will probably think I’m crazy, but one day you will be my wife,'” Tracy regaled to The Epoch Times, adding, “I think I changed the subject after that, but he was a super gentleman.”

The couple then eventually fell in love and Tracy agreed to marry him.

They now share an inside joke, where Tracy tells her husband, “I didn’t think you would ever ask me to marry you, I thought I was going to have to ask.” But ask, he did; Tracy and Clifford married at the home of their Justice of the Peace on April 20, 1980.

Tracy credits Clifford for being the “spiritual leader” of their family. “We put God in the middle of our relationship and don’t want to do things that would be displeasing to Him,” she explained.

Amid three children and seven grandchildren, the couple always found ways to show their mutual affection. “We have always left each other notes here and there, called each other ‘just to say hi,’ and ‘love you,'” said Tracy. “I would write, ‘I’ll miss you today’ on the bathroom mirror, and he would leave me a note in my truck seat.”

Tracy also admitted that they probably even say “I love you” about 15 times a day, while Clifford sends flowers to Tracy’s workplace for no particular reason.

As the couple have spent over four decades together, Tracy shares that the secret to a long-lasting marriage is communication. “Don’t give up when things get tough, for they will get tough,” she advised. “Pick your battles; remember that your differences are what probably brought you together.

“Don’t go to work mad, don’t pull out of the driveway mad,” she imparted. “If something happened to one of you during that separation and your last words were anger, we could never get over that.”

Touched by messages from netizens around the world, Tracy hopes others will follow suit. “Just don’t assume your loved ones know you love them,” she said. “Make sure they know it every day. We’re not guaranteed tomorrow.”