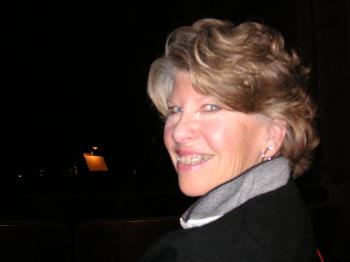 ‘Loved the Blending of Modern and Ancient’

The Chinese Spectacular, performed by the Divine Performing Arts Dance Company at the State Theatre in New Brunswick, New Jersey on August 10th, was enjoyed by Chinese and Westerners alike. People came from as far away as India for this particular performance.

Pas Brattan is a retired General Manager for telecom providerin India. When asked what his favorite program was during the show he said, “It’s difficult to pick a favorite, I really liked them all…I guess if I had to pick a favorite it would be the green fan dance ("Lightness & Grace"). This is my first time with Chinese culture and I hope to revisit it again and again.”

Verity Haggan was amazed, “Excellent! It was all very beautiful, the performances were very enlightening!”

Lakeya, a Government employee in the Division of Youth & Family Services said, “Beautiful! Lots of colors. I’ve been interested in Chinese culture ever since I took a Chinese class and this was really something.”

Penny Pray of Westfield, NJ said "I think its wonderful. It’s a true different culture for us to come and see, and great its being put on in New Brunswick. . . We really loved the drums, and I loved the dancing, and the inspiration peace, where the statues came to life, and I love the costumes, I loved the blending of the modern an ancient. I don’t really understand the story behind it, but I loved the theatric quality."

The reviews from children were short and sweet, but certainly didn’t fail to convey their feelings and opinions about the show. Shantelle, Shamirah, and Kayla, who are 7, 5, and 5 years of age respectively, had one word to explain the show, “NICE!”

Veronica, who works for EZ-Pass simply said, “It was A-O.K! I’d definitely come back!”

Ted DiIorio, a Culinary Arts School Professor and his friend Amy Mach, who does medical billing, caught the show through an arrangement of fate, or so it would seem. Amy started by saying, “It’s the best show I’ve ever seen.” Ted nodded his head in agreement and said, “It’s funny, we found out about this show while we were shopping yesterday. There was a lady promoting the show with a television and a clip from the performance. After watching the clip we thought, “Why not?” It was last minute but we were really glad we came!”