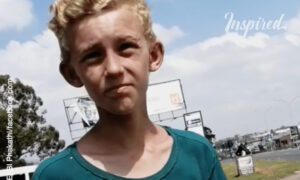 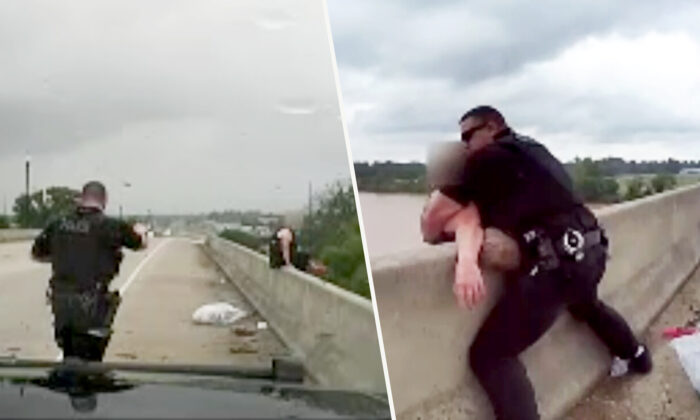 Two Louisiana police officers and a quick-acting passerby have been credited with saving a distraught woman’s life who was on the verge of jumping off a bridge.

On June 1, Bossier City Police hurried to the scene after receiving a call about a “suspicious person” on the Shreveport-Barksdale Highway bridge.

Cpl. Mathew Bragg was the first to arrive on the scene. As he approached the distressed woman, he found her stepping onto the ledge of the bridge over the Red River. In footage captured from Bragg’s dashboard camera, the woman is seen hitting her hands on her legs several times. She takes off her shoes and places them into the side of the road and appears to get ready to jump off the Westgate Bridge.

Bragg acted fast, running to the woman and wrapping his arms around her. “All I could do was just grab her and put all my weight down to keep her from falling,” he explained in a Bossier City Police Department press release.

A second officer arrived in under a minute.

Officer Brandon Bailey pulled over, lights flashing, and ran to Bragg’s aid. While helping prevent the woman from falling into the river, the pair was unable to pull her over the ledge without a third pair of hands, and they waited for additional officers to arrive on the scene.

A passing driver who knew the officer’s needed help stopped his car and intervened in the nick of time, running to grab the woman’s legs and help haul her to safety. The woman and her trio of saviors then fell onto the highway.

Bragg hailed the rescue as a “team effort.”

The two officers were grateful to the Samaritan who sprang into action to help.

Police Chief Shane McWilliams claimed his officers put their lives on the line to save another. “I commend them for their quick response and offer my gratitude to the good Samaritan who stopped to help them,” he said.

The woman, who remains anonymous, sustained no physical injuries. She was driven to Willis-Knighton Bossier Health Center for evaluation.

Bossier City Police want the community to know that help is always available; anyone in distress can call the National Suicide Prevention Lifeline on 1-800-273 TALK (8255).