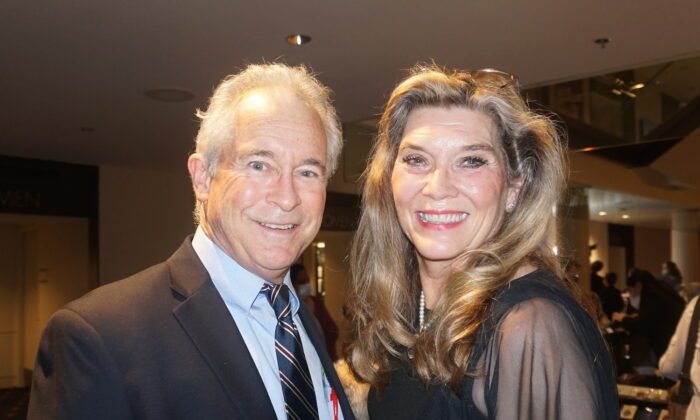 “We love the synchronized dancing and the synchronized movements,” Sibley said. “The colors are beautiful, and the story that they’re telling is for the history of China culture. We’re so glad that it’s being brought to us and that we can witness it. Everything about this performance shows how much rehearsal it takes in practice … and we’re seeing nearly perfection in every performance. And every step in every performer is beautiful.”

Shen Yun has wowed audiences worldwide with its classical Chinese dance and live orchestra since 2006. Based in New York, Shen Yun produces a new and original program every year.

“The colors are so vivid that they’re just unreal, and the dancers are just so skilled,” said Robinson. “The athletic ability that they have is just really wonderful.

“You have to come and see it yourself to really get the effects of it.”

A number featuring dueling restaurateurs touched Sibley. Though the chefs competed tooth and nail, they came together when disaster struck.

“I love the fact that we’re getting to see how loving and caring the people from China are,” Sibley said. “And we’re certainly sad that things have changed.”

Shen Yun unfortunately is not allowed to be performed in China, as many of its performers are religious refugees due to persecution from the communist regime there. In the program, Shen Yun raises awareness about the realities of what Chinese people face today.

In the end, Shen Yun‘s message is one of hope and redemption, something audiences say is welcome during a pandemic.

Asked whether he had any doubts coming to attend a performance due to COVID-19, Sibley said: “The beautiful thing is that everybody is doing what they can to protect themselves. And it’s refreshing to see hundreds of beautiful, attractive, young smiling faces in each scene and each set. … And we’re going to outgrow the pandemic and outgrow the mask, and [Shen Yun] almost gives us hope in seeing that that’s what we’re going to have in the near future—smiling faces again.”