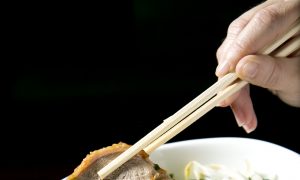 Noodies: A Thai Restaurant That Marches to Its Own Beat
0
Share Now
TelegramFacebookTweetEmailTellMeWeReddit
Copy Link 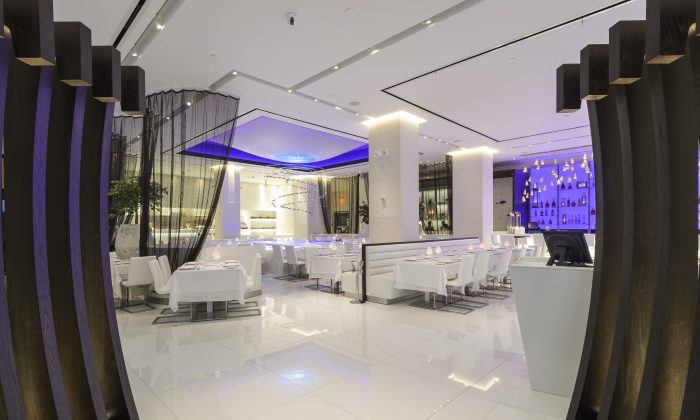 Limani: A Feast Under the Sea

Greek restaurants often go with a cozy maritime aesthetic. Blues and whites, nautical details give diners a feeling of being on an island, or on a boat.

Limani, which recently opened at Rockefeller Center, departs from any clichés. The dramatic setting plays out from the moment you enter the door, with a design mimicking the ribs of a ship’s hull.

The 200-seat restaurant takes up 8,000 square feet, and with its soaring ceiling and gleaming white marble floors, has so much room, you could hold a dance party there and your movements would still be unencumbered.

The eye is drawn to the center of the room, where above a blue square pool is a fascinating sculpture of fish suspended in an eddy. The play of moving lights on the ceiling evokes what you would see if you were swimming under the water and saw the sun’s rays hitting the surface.

Dining at Limani feels a bit like eating in a kingdom under water. It feels imposing and just the spot you would take someone to impress them (unless, seriously, they have a water phobia).

The fare is more down to earth, or down to sea, rather, with more than 20 seafood entrees. In the back, the day’s catch is showcased. As is traditional, these are charged by the pound. The seafood is beautiful, from the flush-red carabineiros from Spain ($85/pound) to the Greek fish like lithrini or fagri ($43/pound).

Ordering meze is tempting. We had the Kolokithi ($24), a column of zucchini and eggplant, cut thin and stacked up with tzatziki and fried kefalograviera cheese, as well as the Patzaria, roasted beets with creamy skordalia ($13).

The star, though, is the fish. At its simple best, a charcoal preparation lets the flavors shine through, with just a squeeze of lemon. We had the branzino ($43), and it was delectable—moist, flavorful, light. It kept us going for more even though we had unwisely stuffed ourselves with appetizers.

It needs no further accompaniment than the medley of simply grilled vegetables ($18), or if you prefer something more substantial, potatoes—steamed and dressed with shallots, oregano, olive oil, and lemon.

A perfect sweet finish is Greek yogurt and honey ($12).

One word of warning. The rents range in the astronomical in the area, and the prices reflect that so be sure to bring a well-padded wallet.