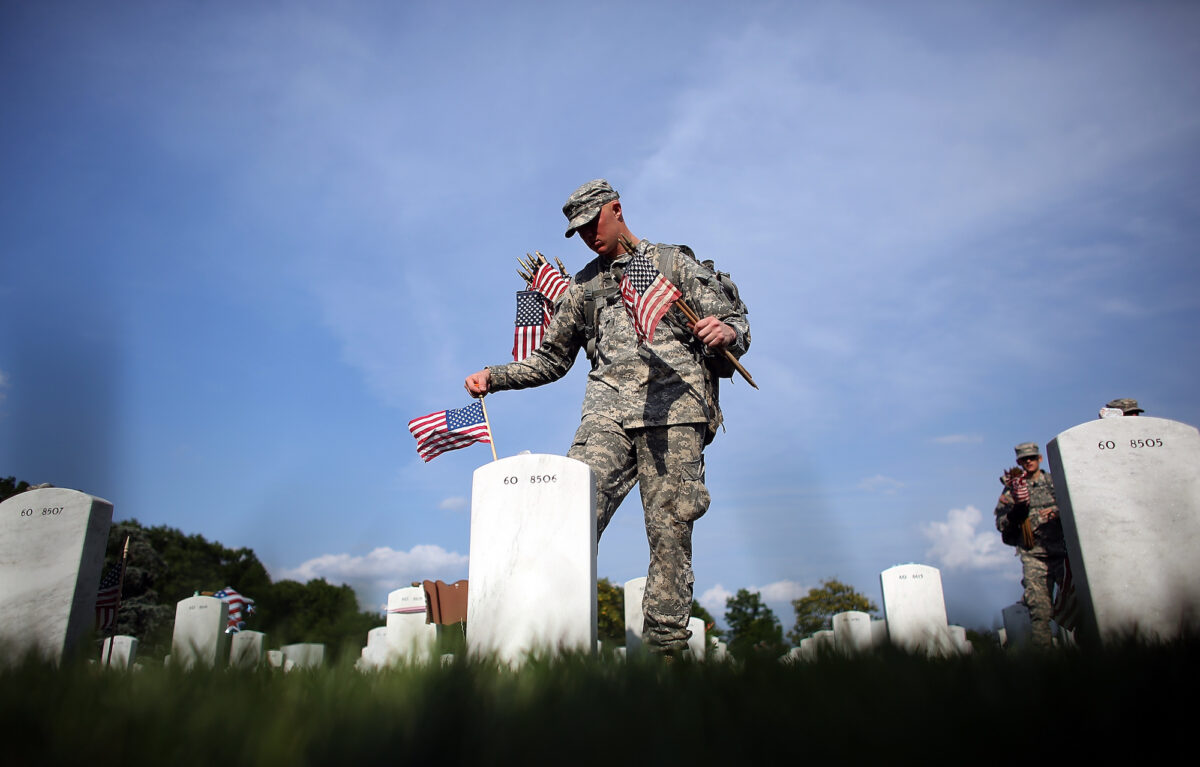 A member of the 3rd U.S. Infantry Regiment places American flags at the graves of U.S. soldiers buried in Section 60 at Arlington National Cemetery in preparation for Memorial Day in Arlington, Va., on May 24, 2012. (Win McNamee/Getty Images)
Family & Education

Let Them Rest Easy: Honoring Those Who Gave Their Lives for Our Freedom

Memorial Day exists for one purpose alone: to pay homage to those Americans who died in war serving their country.

Sometimes we may overlook the true thrust of this day. The three-day weekend, the backyard barbecues, the jaunts to the beach or the countryside: We indulge in these pleasures, appreciative of a holiday away from the office, and often forget, I suspect, to pause and recollect those who have laid down their lives for our country over the past 250 years.

Yet their ghosts, should we care to look for them, are all around us. The Pennsylvania volunteer who fell at Gettysburg, the North Carolina aviator shot down fighting for the Escadrille Lafayette in World War I, the Midwestern sailor whose bones lie beneath Pearl Harbor, the Texas Marine at the Chosin Reservoir shot dead in a battle fought at sub-zero temperatures, and the 13 military men and women killed during our recent withdrawal from Afghanistan all speak to us from beyond the grave, whispering antique words such as duty, honor, and country, to be sure, but also murmuring of other sentiments, such as brothers-in-arms, home, and family.

Memorial Day calls on us to think of them, so many of whom died as heroes. We’ve forgotten most of their names and faces, through no fault of our own—the rush of time and circumstance bury the dead just as surely as do shovel and clay. But now, just this once, let’s recollect what some of them did.

According to the Medal of Honor Historical Society of the United States, since 1863, the Medal of Honor, our nation’s highest decoration for bravery and gallantry in battle, has only been awarded 3,530 times. A total of 19 individuals have each received two Medals of Honor, and more than 50 percent of those medals went to soldiers who fought in the Civil War and in the Indian conflicts on the Western plains. Given our many wars since then, these statistics illustrate that this highest recognition of valor isn’t lightly bestowed.

And some of these combatants received their medals posthumously.

On this Memorial Day, it seems fitting to remember a few of these heroic men who made the ultimate sacrifice.

In June 1944 near Suvereto, Italy, a German crew using an 88-millimeter self-propelled gun was ripping a U.S. combat unit to shreds. Pfc. Kiyoshi Muranaga volunteered to man a mortar and singlehandedly engaged in a duel with the enemy. After he fired several rounds at the gun position, the enemy located him and returned fire, killing him immediately, yet Muranaga’s efforts saved the lives of several men, and his accurate fire caused the Germans to withdraw. Later, he received the Medal of Honor for his heroic attack and his defense of his comrades.

Earlier in the war and half a world away, Marine Sgt. John Basilone was fighting the Japanese on Guadalcanal. His Medal of Honor citation reads in part:

“While the enemy was hammering at the Marines’ defensive positions, Sgt. Basilone, in charge of two sections of heavy machine guns, fought valiantly to check the savage and determined assault. In a fierce frontal attack with the Japanese blasting his guns with grenades and mortar fire, one of Sgt. Basilone’s sections, with its gun crews, was put out of action, leaving only two men able to carry on. Moving an extra gun into position, he placed it in action, then, under continual fire, repaired another and personally manned it, gallantly holding his line until replacements arrived.”

Basilone survived this encounter, won the Medal of Honor, and returned under orders to the United States to raise war bonds. Eventually, he insisted on rejoining the fighting in the Pacific, where he died during the Battle of Iwo Jima. For his actions in that battle, the Navy awarded Basilone the Navy Cross, second only to the Medal of Honor.

On the night of Feb. 7, 1943, Cmdr. Howard Gilmore rammed his submarine, the U.S.S. Growler, into a Japanese gunboat, staving in the plates of the enemy ship. Under heavy machine-gun fire from the sinking vessel, he ordered his men below, was struck by a burst of bullets, gave the order “Take her down!” and died on the bridge of his sub. Although the submarine was severely damaged, the crew brought it safely to port “inspired by the courageous fighting spirit of their dead captain.”

We find these same examples of sacrifice in later American wars.

In 1969 in Pleiku Province, Vietnam, radio operator and Pfc. Garfield Langhorne had spent the day relaying instructions to various gunships, providing covering fire for his platoon and its wounded men. That night, the enemy pitched a grenade into the defensive perimeter near Langhorne and some wounded soldiers. Without hesitation, Langhorne threw himself on the grenade, absorbing the blast and protecting his comrades. His “extraordinary heroism” was “in keeping with the highest traditions of military service.”

On April 4, 1969, Staff Sgt. and Acting Platoon Leader Felix Conde-Falcon singlehandedly attacked a complex enemy fortress, destroying four of the bunkers with hand grenades and attacking a fifth with a machine gun. It was there that he was hit by enemy fire and died soon afterward of his wounds. His citation notes his “extraordinary heroism and selflessness at the cost of his own life, above and beyond the call of duty.”

The War on Terrorism (Afghanistan)

U.S. soldiers in the Middle East continued to display this bravery and their willingness to protect their friends and comrades. Here’s part of the account of Robert Miller’s Medal of Honor citation:

“As point man, Staff Sergeant Miller was at the front of the patrol, cut off from supporting elements, and less than 20 meters from enemy forces. Nonetheless, with total disregard for his own safety, he called for his men to quickly move back to covered positions as he charged the enemy over exposed ground and under overwhelming enemy fire in order to provide protective fire for his team. While maneuvering to engage the enemy, Staff Sergeant Miller was shot in his upper torso. Ignoring the wound, he continued to push the fight, moving to draw fire from over one hundred enemy fighters upon himself. He then again charged forward through an open area in order to allow his teammates to safely reach cover. After killing at least 10 insurgents, wounding dozens more, and repeatedly exposing himself to withering enemy fire while moving from position to position, Staff Sergeant Miller was mortally wounded by enemy fire. His extraordinary valor ultimately saved the lives of seven members of his own team and 15 Afghanistan National Army soldiers.”

There it is again: self-sacrifice.

This Day of Remembrance

In his book “Last Stands: Why Men Fight When All Is Lost,” Michael Walsh asks, “Why do men fight? What or whom is worth dying for?”

He then writes that this answer “is surprisingly simple: they fight for themselves, for their brothers-in-arms, and therefore for their women and children and for their country, which is the expression of family.”

These men depicted here are but a handful of those Americans who have sacrificed themselves on the altar of liberty. Hundreds of thousands of others throughout our history have gone to their deaths for love of their comrades and their country. They’re the spirits behind our Memorial Day picnics and pleasantries, standing behind us in their invisible ranks. We can honor them by putting out an American flag on this day, visiting their graves in our local cemeteries, uttering a few words of gratitude, pausing for a moment of silence at 3 p.m. local time, and remembering them.

By doing good in this world and keeping the flame of freedom alive and burning in our country, we can repay the gift they’ve given to us.