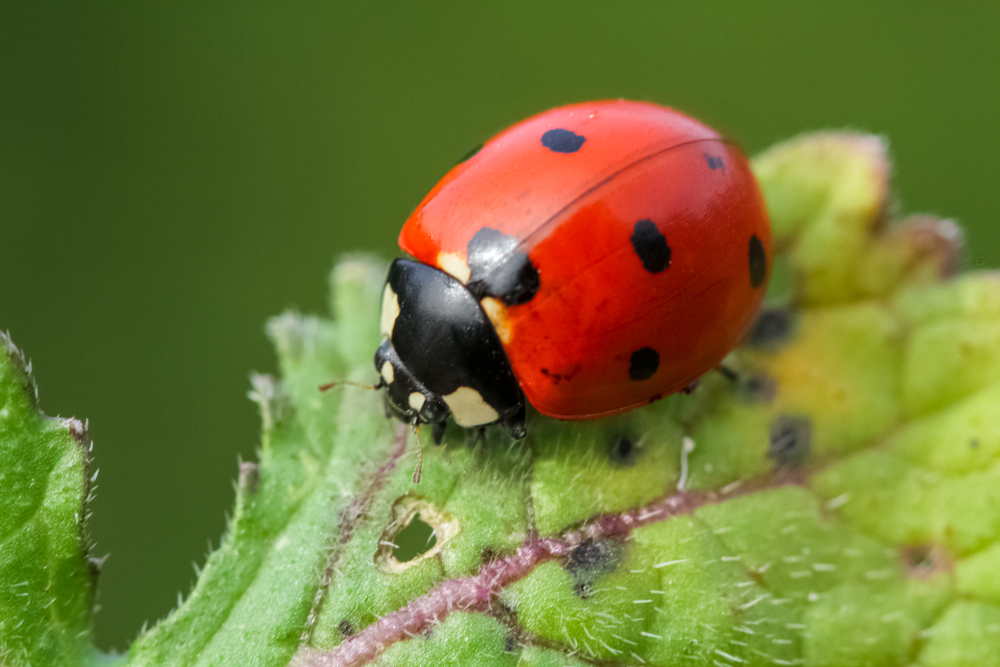 Although ladybugs look adorable, they are in fact killing machines, decimating populations of aphids, mites, mealybugs, and whiteflies. (mehmetkrc/Shutterstock)
Home

Let the Bugs Do the Legwork: Before You Reach for Insecticide, Consider Mother Nature’s Built-In Pest Control

Cut down on chemicals in your garden, while helping to restore biodiversity and insect abundance
BY  EJ Taylor TIMEJune 26, 2022 PRINT

How many times have you reached for a spray bottle to kill off an irritating bug? Have you spent time and money mixing powders and potions in buckets of water to dowse the creepy-crawlies that feast on your favorite flowers? Have you ever gone “Full Metal Jacket” on all things arthropod, fueled with an uncontrollable desire to rid your garden of everything that can eat anything you want to eat?

It’s understandable. Many of us take our gardening very seriously, so anything that has the audacity to walk upon our precious plants is seen as a threat that must be annihilated with immediate effect.

But before making a grab for that spray bottle and participating in a Wild West-style shoot-out, stop and consider this: Are you the sheriff, maintaining the peace, or a misguided lawbreaker who has wandered into town and guilelessly initiated a fray? Should those little critters all be blasted off their leafy resting places by a jet of noxious insecticide?

Some of them are actually highly beneficial predatory species that contribute toward controlling pests. As part of a “biological pest control” team, they should be nurtured and left to do the remarkable jobs that only they can do.

These garden helpers come in all shapes and sizes: some winged and some flightless; some relatively large and some almost invisible to the naked eye; and some legless and some with multiple sets. They can be categorized into generalist, or polyphagous, feeders, which prey on a range of species; oligophagous feeders, which prey on a limited number of species; and specialist, or monophagous, feeders, having one prey species only.

Phytoseiulus persimilis is one such helper. Although this tiny spider mite may look like a pest you may wish to swat, it is, in fact, a voracious feeder of the two-spotted spider mite—the true pest. Two-spotted spider mites are pests of over 200 plant species and can be the cause of huge economic losses due to the damage they cause to fruits, vegetables, and ornamental plants. A single phytoseiulus persimilis can eat up to 20 pest mites per day and, above a certain temperature, can even reproduce more rapidly than their host. They not only will devour two-spotted mites, but also will happily chow down on other species, including thrips larvae. Win for them, win for us!

Species of true bug, from the order hemiptera, such as orius laevigatus, are like tiny knights in shining armor, galloping toward their adversaries. They lance their prey with a needle-sharp, spear-like proboscis and suck out their innards. They and other species of true bug also feed on mites, thrips, aphids, and whiteflies, all commonly known pests in the garden and in commercial farming. Thrips, for example, although tiny in stature, can pass viruses on to the plants on which they feed, leaving a trail of devastation in their wake.

Beetles are excellent generalist predators. Ground beetles will devour aphids, slugs, maggots, and caterpillars, and therefore could be described as the 007 of the biological pest control world. They can run, they can burrow, they can fly (although they look ridiculous on take-off), and they are armed with impressive mandibles. The much-loved ladybird, or ladybug (they’re neither a bird nor a bug, but there you go), is also an excellent example of a biological pest control beetle. Although they look adorable, they are, in fact, killing machines, decimating populations of aphids, mites, mealybugs, and whiteflies. Even their young are formidable predators!

Although unlikely candidates, flies too can be an effective biological pest control. Hoverfly larvae, innocuous-looking little brown maggots, can consume around 50 aphids per day. Similarly, lacewing larvae can match hoverfly young in their ability to gorge themselves on poor, unsuspecting aphid populations.

Although much of the biological pest control we find in our gardens work like a squad of highly trained military personnel, carrying out their duties on parade, many others operate “under the radar.” Although the temptation may be great to remove every aphid you see from your rose bushes, look closely before you do so, and you may just get a surprise.

Aphid colonies, like the occupants of Troy, are often unaware that they have been infiltrated by a Trojan horse: one of their own kind, parasitized by a diminutive wasp. The wasp’s larvae, pupating within its mummified aphid host, is ready to burst out (actually, it cuts itself a remarkably neat little door from which to escape) to inject eggs into countless other hapless hemiptera. Such is the life of an aphid!

Similarly, caterpillars of the large white butterfly are commonly parasitized by the tiny braconid wasp. The caterpillar, replete with wasp larvae, duly leaves the cabbage it was munching on and reenacts the “Alien” movie. It’s actually disgusting to witness but an incredible example of how one species can control the population of another.

Indeed, so difficult are such parasitoids to detect that scientists, when populating a Finnish island with the glanville fritillary butterfly, accidentally introduced a parasitoid species as well as a hyperparasitoid (think Russian dolls of parasitism) along with it. Awkward!

The number of insect predators and parasitoids is immense, and still, much is unknown about the feeding habits of countless species. One thing is clear, however: Biological pest control can have a significantly negative impact on pest species.

Insect numbers are declining across the board. The number of pollinators has reduced significantly in the past 25 years, and predatory insects have also declined rapidly. Reducing the use of chemical controls and embracing the predatory species that already exist in nature may not only help to reduce pest numbers, but also increase our crop yields, biodiversity, and insect abundance.