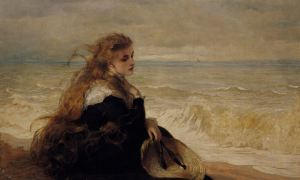 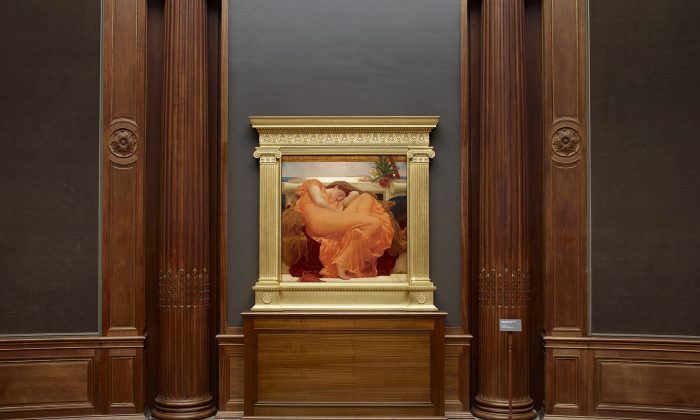 NEW YORK—”Flaming June,” the iconic painting of the Victorian era by Sir Frederic Leighton (1830–1896), has followed a most unusual trajectory. Around the turn of the century, art collector Samuel Courtauld called it, “The most wonderful painting in existence … a gorgeous piece of flamboyance.” Some decades later, when the English composer Andrew Lloyd Webber asked for money from his family to buy “Flaming June,” his grandmother replied “I will not have Victorian junk in my flat.”

Passing from one owner to the next as it was falling out of fashion, “Flaming June” at one point was boarded up behind the false panel of a chimney mantel in a house in Clapham Common on the outskirts of London. It disappeared for decades, until it was mysteriously rediscovered and resuscitated at a most unlikely time, in 1962 when Andy Warhol was painting Campbell soup cans, when Victorian art was stigmatized for being prudish and sentimental.

‘Flaming June’ was inspired by ‘a chance attitude of a weary model who had a peculiarly subtle figure.’
— Sir Frederic Leighton, artist (1830–1896)

The founder of the Museo de Arte de Ponce, Luis A. Ferré, would travel through Europe to buy works for the museum. When he saw “Flaming June” tucked away in a corner of the gallery of the art dealer Jeremy Stephen Maas, he immediately fell in love with the painting. He only had to pay 2,000 pounds ($8,000 today, factoring inflation) to acquire it.

“Flaming June” eventually made its way across the Atlantic, finding its new home on the Caribbean island of Puerto Rico, where it’s taken care of very well at the Museo de Arte de Ponce. Now, “Flaming June,” coming full circle, is revered once again and can be seen in New York City, on loan at The Frick Collection until Sept. 6.

The painting is aptly hung at the center of The Frick Collection’s Oval Room, and one is immediately struck by the vibrant orange color that Leighton used to depict the semitranslucent drapery on a sleeping woman. Flanked by ribbed columns, which mirror the fluted Ionic pilasters of the painting’s Renaissance-inspired frame, and surrounded by the subtle gray color of the walls, the Oval Room provides a perfect setting for enhancing the painting’s vibrancy. It has also been reunited for the first time since the 19th century with a 4-by-4-inch oil sketch that Leighton painted to determine the painting’s color scheme.

We are led to wonder about the real woman who posed for Leighton and to the very nature of that most unusual kind of relationship between artist and model.

Senior curator of the Frick, Susan Grace Galassi, explained at a press preview in the month of June (perhaps not coincidentally) how Leighton was a proponent of “art for art’s sake,” whereby the subject of the painting is annulled from any specific narrative, didactic, religious, or political purpose. Galassi wore an intense cobalt blue silk dress—the complementary color to the predominantly orange painting—perhaps as a nod to Leighton, respecting his deliberate emphasis on the formal qualities of art such as composition, form, color, texture, and rhythm.

A Circle for the Intellect and the Senses

A circular composition on a square canvas, “Flaming June” sets in motion a dynamic cycle for the intellect and the senses. “Her body is in a very complex pose,” Galassi said, pointing toward the painting. “It forms a circle and the drapery fills out the circle. If you go from the top of the head, you see how it steps down to the elbows and around. … The form suggests energy in repose. She’s asleep but the body is still very energized,” Galassi added.

‘Flaming June’ is inviting and elusive, either fascinating or irritating perhaps for the same reason.

In front of a shimmering sea on a high horizon line, an oleander flower lies on a classically inspired architectural parapet, looming over the woman’s head. Oleander is a poisonous flower, popularly written about by poets of the Victorian era. Leighton had a heart condition—angina pectoris—when he was painting “Flaming June.” Several art historians have suggested that the oleander indicates how Leighton was very much aware of his imminent death. Others have suggested it indicates the dangers of a man’s doomed infatuation with an unavailable woman or a femme fatale.

According to Leighton, “Flaming June” was inspired by “a chance attitude of a weary model who had a peculiarly subtle figure,” Pablo Pérez d’Ors, associate curator of European art at the Museo de Arte de Ponce, said at the preview.

After that spontaneous spark, the rest of Leighton’s creative process was methodical and meticulous. He produced numerous preparatory drawings, which Galassi thoroughly details in the Frick’s catalog of the painting, “Leighton’s Flaming June.” His academic approach and emphasis on classicism was out of fashion in the late 19th century, counter to the impressionist and post-impressionist art movement. “A little bit obsolete for that time,” Galassi said.

President of the Royal Academy and one of the best-known artists in the late 19th century, Leighton finished “Flaming June” in March 1895 in London 10 months before his death. He was the only artist to have been ennobled, and for the shortest period of time. Queen Victoria named him Frederic, Lord Leighton, Baron of Stretton just a day before he died. He remains the only British artist to receive that accolade.

“Flaming June” is inviting and elusive, either fascinating or irritating, perhaps for the same reason.

As humans, we are predisposed to find meaning in life, in what we experience and see. The elusive quality of “Flaming June” then pulls us in again and again to question over and over, only to furtively derive at any definitive answer. Who is this sleeping woman? What is she dreaming? Or is she pretending to be asleep? We can’t tell for sure. “Flaming June” is perhaps simply an ode to beauty, giving us the freedom to project whatever we want onto a sleeping woman who was once an artist’s favorite model. It gives ample opportunity to reflect upon one’s own projections.

As it is not connected to any specific story, allegory, or historical figure, if we step back from being mesmerized, we are led to wonder about the real woman who posed for Leighton and to the very nature of that most unusual kind of relationship between artist and model.

Jacob Collins, artist and founder of the Grand Central Atelier, who also paints models, called it “a strange relationship,” because we don’t often spend long silent stretches of time intensely studying another person. “It’s some kind of meditative relationship,” he said during an interview in his home studio earlier this year.

But unlike Collins, Leighton was more immersed in idealizing his model to conform to formal rules of aesthetics rather than representing an exact likeness. In our electronic age, you could say she has been obviously photoshopped to convey a woman less human and perhaps more divine and unattainable in all her beauty.

Leighton designed his house, now a museum, to have three doors: the main door, the servants’ door, and a door designated only for the models. The models’ door led directly to his studio with no connection to the rest of the house, so that the model would not have any unforeseen contact with anybody else in the house, and vice versa. Another unusual aspect of Leighton’s massive house was that it only had one bedroom. A bachelor all his life, Leighton’s private life was exceptionally private. He formed his public persona mainly tied to the Royal Academy as its president, which Daniel Robbins, the senior curator of the Leighton House Museum, described at length in his lecture on June 24 at the Frick.

Robbins noted that the playwright George Bernard Shaw was rumored to have been inspired by the dynamic between Leighton and his favorite model, Ada Alice Pullan, to write “Pygmalion” (later to be adapted for the film “My Fair Lady”), and not only by a classical myth.

The phonetics professor Henry Higgins’s fascination in tutoring and molding the working-class Cockney woman Eliza Doolittle in “My Fair Lady” perhaps mirrors how Leighton found Pullan’s working-class background and undeveloped character appealing to his slightly obsessive and controlling personality, Pérez d’Ors said during his lecture at the Frick on June 10.

Pullan met Leighton in 1879 when she was 20 and he was 49. She was also an actress and adopted the stage name of Dorothy Dene, when Leighton became her beneficiary and an enthusiastic supporter of her acting career. Pérez d’Ors said that Leighton’s early depictions foreshadowed her theatrical roles that eventually made her famous.

All interpretations aside and despite its unforeseen trajectory, “Flaming June” displayed in the Frick today “is sort of the ultimate proof that Victorian art has been rehabilitated,” Pérez d’Ors said to the small crowd of journalists at the preview. It has been reproduced in so many souvenirs, she has unexpectedly become a cultural ambassador for Puerto Rico, Pérez d’Ors said. It captivates our imagination and compels us perhaps to take a vacation and a nap by a shimmering sea.

Thanks to Ferré, a man who was true to his sense of taste, despite many questioning his judgment, the pop art movements of the 1960s, or any other passing fashion, we can admire “Flaming June” in New York City for a while.