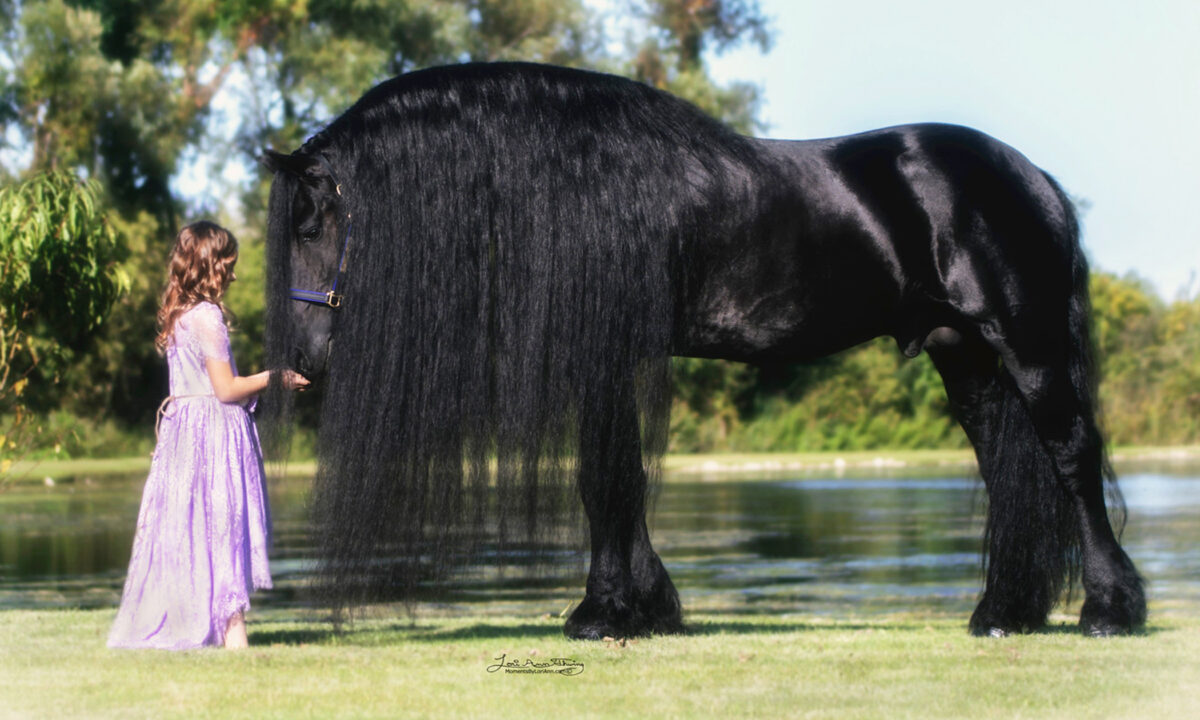 (Courtesy of Moments by Lori Ann and loriannthwingphotography.com)
Animals

Legendary Stallion: A Photographer’s Once-in-a-Lifetime Experience of Working With Uldrik 457

'It was like looking at a living, breathing work of art'
BY Louise Chambers TIMEJune 24, 2022 PRINT

An equine photographer recalls the day she spent with the Friesian stallion of her dreams, and the magical ripple effect his images are having on the world.

Born and raised in Hastings, Michigan, photographer Lori Ann Thwing, 52, currently lives in nearby Howard City. She was the last to photograph the legendary stallion Uldrik 457 before he passed away.

“I met Uldrik the day I shot his photos,” Lori Ann told The Epoch Times. “He was standing at stud at Black Pearl Friesians LLC in Rockton, Illinois … he was truly a legend in the breed.”

Lori Ann said having a KFPS Royal Friesian Approved Breeding Stallion come to the United States is a very big deal in the equine community, as there are only 22 in North America and 82 in the world.

“As soon as I learned who was coming, I knew I needed to meet him.” she recalled.

Lori Ann contacted Uldrik’s owner, Kylee Sheila Dunn of Pitch Black Stables, whom she knew through social media. In October 2019, Dunn invited her to meet the stallion and take his photos, which Lori Ann said was a “very big honor” and something she had worked hard for.

Lori Ann recalled, “I had driven four hours from Michigan to Illinois to meet him, and remember seeing him for the first time like it was yesterday.

“I walked into the barn where his manager, Tiffany van der Kooi, was finishing the daunting task of bathing him and washing all that luxurious hair. He was standing in the wash stall with his mane down, almost to the ground. I literally froze in place and stared at him. He was just magnificent.”

Uldrik’s pitch-black velvet coat gleamed as he stared at Lori Ann with brown, soulful eyes. He was so calm and relaxed; the photographer recalls him seeming like “a big teddy bear brought to life.”

Seeing past the powerhouse stallion she recognized from equine inspections, Lori Ann saw the black stallion of her dreams, but also felt his “kind, gentle, happy spirit” welcoming her to look and touch.

“It was like looking at a living, breathing work of art and I couldn’t help but get tears in my eyes,” she remembered.

Lori Ann worked as a Friesian foal handler for nine years, had trained around 100 foals, and had taken tens of thousands of photos of Friesian horses before meeting Uldrik. As she prepared for their photoshoot, she knew how to handle the breed.

She and Uldrik’s owner decided he was the perfect stallion to shoot with children. Kylee contacted a friend, Ray Scheffler Clifford, whose children—Taylor Williams, 12, Raelynn Williams, 9, and Blakely Clifford, 4—became willing models.

Keeping Uldrik on a lead rope with adults mere meters away, Lori Ann took safety seriously, using careful positioning and editing to make the “fantasy look real.” But she needn’t have worried; Ulrick bonded effortlessly with the children.

“Never work with animals or kids, and I chose to do both!” Lori Ann said. “I could not have asked for better young models or a better-behaved horse.”

One magic moment produced one of Lori Ann’s favorite photos.

“I wanted to capture natural moments,” she explained. “After one of the costume changes, I asked Raelynn if she wanted to hug Uldrik, so she walked up to his chest, wrapped her arms around him, and squeezed. I am used to horses hugging back sometimes … but what Uldrik did, I did not expect.”

“He dropped his head to her level and hugged her whole body with his head and neck. Just then, a gentle breeze blew through his mane and forelock (the hair between his ears), lifting it slightly into the air. She squeezed, he nuzzled, and the wind blew. It was perfect.”

Lori Ann later worked on her photos in PhotoShop to remove Uldrik’s handlers and touch up lighting and color. The one challenge to this dream photoshoot, she reflected, was accepting when it came to an end.

“I really didn’t want the session to end,” she said.

The public response was emphatic. Compliments for Uldrik from fans included, “magnificent specimen,” “breathtaking,” and “absolutely beautiful.” One ethereal shot of Uldrik posted on social media has been liked tens of thousands of times.

Lori Ann recalls getting up at 4 a.m. to watch Uldrik on TV during the Friesian stallion inspections in the Netherlands, where he was champion in 2010 and 2011, and reserve champion in 2012. To her, Uldrik was “perfection.”

Being allowed to photograph approved stallions is hard, she explained. One bad photo could misrepresent them and a breeder could pass them by; one good photo could be used to promote the stallion, leading to more breeding and offspring, affecting the future of the Friesian breed. “Every photo counts,” she stressed.

Lori Ann, who has a degree in zoology with an emphasis on animal behavior, raised lion and tiger cubs before raising Friesian foals. She was 40 when she discovered her love for photography. The foals she trained were growing so fast, she wanted to remember them; her husband bought her a camera, and good feedback sent her career soaring.

“I love these horses. I fell in love with them when I was a foal handler and haven’t stopped being a cheerleader for them since 2010,” she said. “I have loved and lost; I’ve held foals in my arms as they died, comforted mares as their foals passed away, and had a part of my soul ripped out as I laid on the ground with a very special mare while she took her last breath.

“This breed has also brought me so much joy,” she countered. “I have sat on two approved stallions and ridden several mares, sat in a pasture with fifteen mares as their foals grazed around me. Every time I see them, they take my breath away.”

Lori Ann dreams of one day owning a Friesian herself. In the meantime, she credits her ongoing success as a photographer to the fellow enthusiasts who encourage her passion.