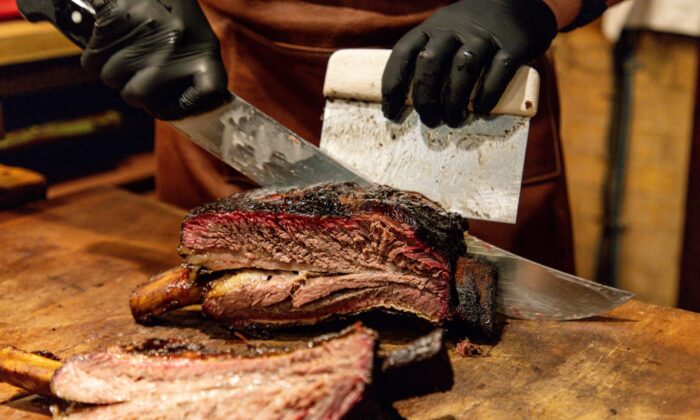 I thought I’d made a reasonable request, but the server at Kreuz Market in Lockhart, Texas, stared me down like a cook in a junior high cafeteria.

“Knives and fingers only,” he said. “We’ve been doing it that way for 96 years, and we’re not about to change now.”

I exchanged a $20 bill for the picnic knife he handed over, plus a large pickle and a pound of oak-smoked beef shoulder, and headed off to a Formica table that could have won historic designation, if anyone gave such recognition to old tables. A 9-foot rattlesnake skin hung on the wall of the 1924 brick building, which was built to replace the original metal building that had housed the business since its 1900 opening. Sitting down in a matching chair, I spread wide the mauve butcher paper and started an adventure.

That was my introduction to Lockhart a quarter-century ago. Long famed as the Lone Star State’s barbecue capital, today it illustrates how even the most venerated institutions change. In the late 1990s, a family dispute split the Kreuz business in two: Smitty’s in the 1924 building, and Kreuz Market in a new facility at the edge of town. Now forks are available; so is sauce for dipping your meat.

But the basics haven’t changed—including the all-important way the meat is cooked.

In Texas, barbecue is a religion—the most ecumenical one in the state. Black, white, brown; young and old; male and female; red, blue, middle of the road: all favor barbecue, and often hold strong opinions about it.

I suppose vegetarians don’t, but there may be more barbecue joints than vegetarians, from the sultry pine woods of East Texas to the dust-devil plains of the state’s far west. From small towns to major metros, barbecue is the regional cuisine towering over all others.

No part of the state is more dedicated to barbecue than the Hill Country surrounding Austin and San Antonio. And no place is more celebrated than Lockhart, which the state legislature declared the “barbecue capital of Texas” a couple decades ago. Here, in a town of 12,000, are four seminal restaurants that regularly pop up in travel guides and good-eats compilations: Black’s, Smitty’s, Kreuz, and Chisholm Trail. Three of the four have appeared on the Texas Monthly list of the state’s 50 best barbecue spots. Yes, barbecue coverage is a crucial part of the magazine’s editorial calendar.

“Texas barbecue is without peer on Earth,” wrote Daniel Vaughn in the magazine’s 2013 compilation.

Texas barbecue has ancient roots that go back to indigenous cookery, then to Mexican and 19th-century African American cuisine. Barbacoa is the Spanish term, barbacot is Haitian; they may or may not predate “barbecue.” The Central Texas style—especially its sausage—derives much of its heritage from the German and Czech immigrants who settled in the Hill Country (the Kreuz family among them). The whole point originally was smoking meat to preserve it in the Texas heat.

All these cultural tides produce great variety in Texas barbecue.

“Mention the word barbecue in Texas and two things are bound to happen,” wrote Andy Rhodes in the Texas Historical Commission magazine Medallion in 2005. “First, people’s hunger juices will start flowing; second, a debate will ensue about the best way to prepare the meat.”

The debate may or may not include: what kind of meat (beef and what cut, or pork, and possibly chicken and turkey); what kind of wood (post oak, pecan, mesquite, hickory); brick pit or cast-iron barrel smoker; and seasoning, sauce, or rub—or not (“sauce is for people who don’t know how to cook meat,” a Texas pitmaster once told me).

Grandson of Edgar Black Sr., who started Black’s Barbecue in 1932, Kent is a former municipal judge who took over the business when his parents retired, and thus became, in barbecue parlance, the pitmaster. Ask him which profession is more important, judge or pitmaster, and he has to pause a moment.

“Tough question. As a judge, I was entrusted with the law. As a pitmaster, I’m entrusted with three generations of great barbecue, and I feel a huge responsibility to uphold the traditions and the quality.

“We’re not flipping pancakes here,” he said. “Just to cook good barbecue is a 10- to 12-hour process that starts before the crack of dawn.”

On a recent return to Lockhart, I stopped by Black’s, two blocks down the street from what is now Smitty’s. Outside, a 30-foot crimson crepe myrtle shaded the roof of the Depression-era plank-front building, helping fend off midday sun in 96-degree heat. Across the street is the Calvary Chapel, Anchor of Hope; the multicolored spires of the 1894 Second Empire Caldwell County Courthouse reach skyward nearby. In the entry to Black’s, a sign urged social distancing: KEEP ONE COW APART.

Manuel Garcia readied deft hands, well-trained from 12 years on the job, as I nodded at the meat-laden ivory arches of the giant beef ribs.

He wielded his knife to slice off a couple slabs, ladled them onto a plate, and looked at me expectantly. I asked for a sausage link and a few slices of brisket, and off I went, listening to Hank Williams and Bob Wills on the sound system, admiring the pictures of the Lockhart High School band on the walls, savoring the sharp smell of oak smoke that permeated the restaurant.

And the meat? Perfection. Moist, redolent, savory, rich. Certified Angus beef; salt and pepper rub; cooked in hot post oak smoke in a brick barbecue pit built by Kent’s father, Edgar Black Jr., in 1949. The meat never sees a flame, nor any sauce at all during cooking. The fire is lit at 4 a.m., and lunch is the major meal, not supper.

Since my first visit to Lockhart, some things have changed; barbecue isn’t frozen in stone, tradition or not. Today, customers can get forks at every joint in town (“I’m not going to eat like an animal!” visitors sometimes used to yell at hapless servers), and where sauce was once banned, now you may ask for it to add to your meal, even at Kreuz and Smitty’s. After the meat is cooked, of course. Butcher paper remains de rigueur, but if you’d prefer a plate at Black’s, fine.

Black’s is definitely not antediluvian. The restaurant is air-conditioned, and there’s a TV screen showing sports. Unlike many other barbecue joints, turkey and chicken are on offer; Kent added beef ribs 16 years ago, when they were quite rare on everyday barbecue menus. During the pandemic, online business boomed, and the company didn’t lay off or furlough any of its 150 employees.

But Kent promises the establishment will never, ever change how it cooks. Indirect heat, oak smoke, salt and pepper rub. Period.

Although “Texas barbecue” seems a monolithic juggernaut—it even has its own entry in the Encyclopedia Britannica—everything is bigger in the Lone Star State, including culinary diversity. The beef brisket, oak-smoke Central Texas style gets much of the attention, but three other types are prevalent elsewhere.

East Texas: In the piney woods east of Houston and Dallas, pork ribs predominate, and are cooked with a rub or sauce using hickory. Southern sides such as collards and okra are common.

South Texas: Barbacoa is a traditional Mexican approach to cooking lamb, goat, or pork; the entire carcass is traditionally placed in a pit where the fire and meat are covered with maguey leaves.

West Texas: Mesquite is the wood found west of the Hill Country, and in the vast expanses of West Texas, beef, chicken, and sausage are cooked over direct heat from mesquite—a style resembling ranch cookery in Arizona.

Eric Lucas
Follow
Eric Lucas is a retired associate editor at Alaska Beyond Magazine and lives on a small farm on a remote island north of Seattle, where he grows organic hay, beans, apples, and squash.