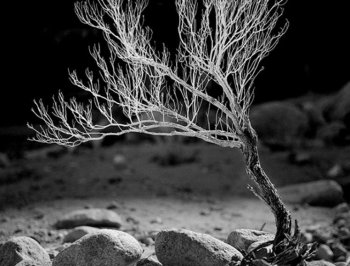 BY Tara MacIsaac TIMEJanuary 2, 2011 PRINT
NEW YORK—“Trees offer so many things to us as humans. They provide shade, fruit, support; they are enduring,” muses Ruben Reyes, a well-traveled photographer with a sense of adventure and a special place for trees in his heart and in his work.

Reyes, 33, has been photographing trees since he first picked up a camera at the age of 14 in Mexico City. A former schoolmate from his days at the International Center of Photography in Manhattan, Bess Greenberg is now the curator at the 25 Central Park West Gallery. When she put out a call to photographers for their best tree photos to display in her Giving Trees exhibit, Reyes was happy to respond.

In 2006, Reyes was on an inspirational, solo camping trip in Death Valley National Park. The sun was rising as he strolled through a narrow canyon. The rays of dawn illuminated the branches of a stunted desert bush, while casting a dark shadow on the rocky earth below.

“It was like a gradient going from positive to negative,” said Reyes of his “Death Valley” photo. The contrast between the background and the branches, and the way this little bush had the form of a large tree, caught the photographer’s eye.

In black and white, the gray desert floor and shadowy cliffs resemble the surface of the moon with the vast outer space behind. The illuminated branches recall images of phosphorescent coral on the ocean floor. Land, sea, and outer space seem to come together in one photo.

The photos displayed in the Giving Trees exhibit (running until Jan. 9), celebrate trees as exemplars of nature’s beauty. From elegant aspen groves, to the gnarled and wind-blown spruce of the seashore, the variety of species and settings evoke a wide range of responses in the viewer.

Giving Trees is not only about arboreal beauty, however. It is also about preserving the world’s forests and the ecosystems they support.

Proceeds from print sales go to the Green World Campaign. This non-profit organization plants trees in places like Ethiopia, where the desert continues to expand, leaving 97 percent of the country barren and inhospitable. The forest’s canopy protects water supplies, promotes biodiversity, draws CO2 from the atmosphere, and turns wasteland into fertile grounds in a land of hunger and strife.

The Magnum Foundation, an organization that supports in-depth documentary photography, collaborated with the Green World Campaign to put together this exhibit. Part of the foundation’s mission is to work with non-profit partners to visually represent the issues they address. The exhibit is timely, heralding the United Nations’ Year of the Tree, 2011.

The woods of the world are displayed in various states and styles by the 11 photographers participating in the Giving Trees exhibit.

Eirik Johnson’s Freshly Felled Trees divides the frame between the dense trunks of a forest and the stumps and brush of a clear-cut in Washington State. Daniel Kukla took aerial shots of oil palm saplings in Malaysia. Jane Fulton Alt’s photos capture the destruction of trees ablaze in a forest fire. Lucy Helton shows the still somberness of charred trunks and burnt pine branches after the flames have been extinguished.

Keryn Huang, inspired by the Chinese landscapes of yore, captured a row of trees on the horizon, dwarfed like bonsais by the ocean spray and strong gales on the shores of Bristol, England.

What strikes Huang about Chinese landscapes is their unique sense of scale. “A really tiny person might stand next to a huge mountain,” Huang says of traditional Chinese paintings. In her photo “Sea Winds,” Huang says, “The trees took on a different sense of scale.”

The atmosphere was rife with tension and change as she walked along the Bristol seaside. An eerie glow lit the sky, and she could sense a storm coming. She struggled with her “huge horse of camera”—a 1970s model, loaded with medium format film that is extra sensitive to light—as she tried to get the perfect shot before the downpour.

Huang looks for images of change and movement to capture in her still frame. She found the form of the trees interesting, frozen as they were in a leaning stance by years of growth near the strong seaside gusts.

In sharp contrast to the hunched arbors of the English shore, Huang’s other entry in the exhibit displays a neat line of slim, erect cypress trees in a light and wistful atmosphere in Italy. She used infrared film to pick up the subtle glow of the moonlight and fading sun in “Under Dusk Moon.”

“A recurring subject in my photographs has been trees,” Huang writes in a work statement for her black-and-white photos. “[They are] representations of the cycle of life.”