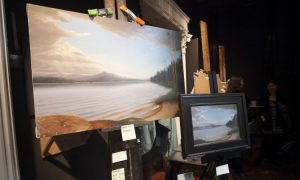 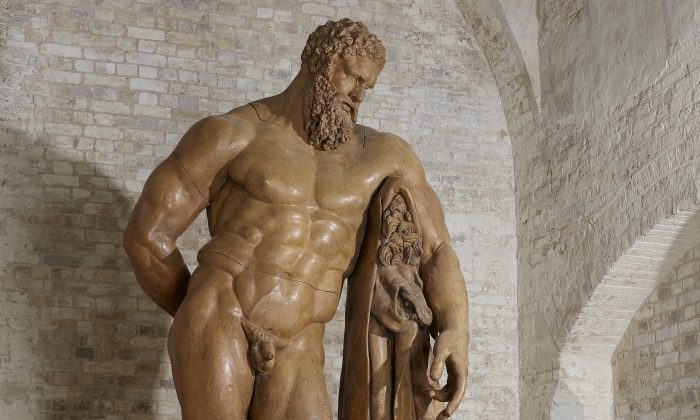 Learning From the Classics: ‘Farnese Hercules’

Helen Valentine, senior curator at the Royal Academy of Arts in London, shares her short talk on the “Farnese Hercules,” the largest plaster cast in the Royal Academy’s collection, at 10 feet, 5 inches high.

The “Farnese Hercules” came to the academy at the end of the 18th century, around 1791. When the Royal Academy was founded in 1768, part of its founding principles and aspirations was to set up a school to train artists. The first students arrived in 1769, and at that time, the curriculum was very clearly defined. All students, whether they focused on painting, sculpture, or architecture, had to master the skill of drawing, and in particular the skill of drawing from plaster casts.

Once they were enrolled in the Schools, students could spend up to a year just drawing plaster casts. It was very important: They had to be proficient at that before they were allowed to proceed and draw from a life model.

The reason this was so important was that from the Renaissance to the 19th century, drawing from ancient sculpture was the way in which students learned to understand the human form. It was felt that classical sculpture was the ideal representation of beauty, and only if students could understand and have a close knowledge of ancient sculpture by making many drawings from classical statues, could students then move on to drawing from life.

In the 18th to 19th century, it wasn’t about creating a very realistic representation. It wasn’t painting every blemish and wrinkle. It was about high ideals: It was about beauty.

This particular cast shows Hercules resting his massive frame over a club, over which is draped the skin of the Nemean lion. Hercules has just performed one of the last 12 labors, and because of this slightly resting pose, he was sometimes referred to as the “Weary Hercules.”

He’s got that slightly contrapposto pose, where the weight is more on one leg and the hip turns slightly out.

It’s quite interesting that he is resting. It’s not a figure in action; he’s not wrestling a lion. In a way, it does give us a chance to admire this beautiful muscular figure; even when you look at the back of him, his back is quite muscular as well.

What is quite nice are the references to the labors. When you look at the cast straight on, you see the skin of the Nemean lion. But if you walk round the back, you will see that he is holding three apples, and these were one of his last labors. Hercules had to go and get the golden apples from the Garden of Hesperides.

History of the ‘Farnese Hercules’

The “Farnese Hercules” is a plaster cast of a Roman statue made in the early part of the third century, which was discovered in Rome at the Baths of Caracalla in 1546. The statue is signed by a sculptor called Glycon, but what is interesting is that it’s a Roman statue that’s probably based on a larger, original Greek sculpture, possibly made by Lysippus or by his circle in the late fourth century B.C. It was very common for Roman sculptors to copy Greek originals, some of which would’ve been in bronze and no longer exist.

Shortly after it was discovered, the original statue was installed in the courtyard of the Palazzo Farnese, and that’s where the “Farnese Hercules” gets its name. The original is now in the National Archaeological Museum in Naples.

I think that when it was being restored in a workshop in Rome, a mold was taken from the original statue, and from this mold the Academy was then able to commission this cast in 1790.

When the cast arrived, there was great discussion about where to place it, because it is a huge cast. The center of the torso is hollow, but the whole cast still weighs over 2,800 pounds. If you visit the Royal Academy, you will see that it is in five pieces. This is important for a cast of this size, as you could never move it in its entirety.

The cast itself would’ve been made by using a piece mold, a form of casting where you use many bits on the outside to take an exact copy of the cast. But when you look at the cast today, all the lines from the piece mold are not visible; it’s a very good finish: a beautiful cast.

If you look at other casts that are in the same area at the Royal Academy, you can see that some of them have these clear lines from the piece mold, so it’s quite interesting to compare them.

The Beauty of the “Farnese Hercules”

The “Farnese Hercules” was very much admired in the 18th and early 19th century. Napoleon tried to ship the original sculpture back to Paris. He felt that his collection needed it, but it didn’t get there in the end.

But what’s interesting in the 19th century is that you do start to get some criticism about the sculpture, saying it’s less beautiful because it’s sort of loaded with muscles; it doesn’t quite fit the classical ideal. But that was a later feeling about it from protégés of the neoclassical style in Europe, and their love was for very lightly muscled figures. But one has to turn back to the fact that this is Hercules; it was appropriate for that reason.

The effort the academy went to, to get this enormous cast back to England from Rome, shows how important not only this particular cast was but how important classical sculpture was for the training of artists. It was just absolutely paramount, and it embodied everything they wanted students to learn.

To find out more about the “Farnese Hercules,” visit RoyalAcademy.org.uk