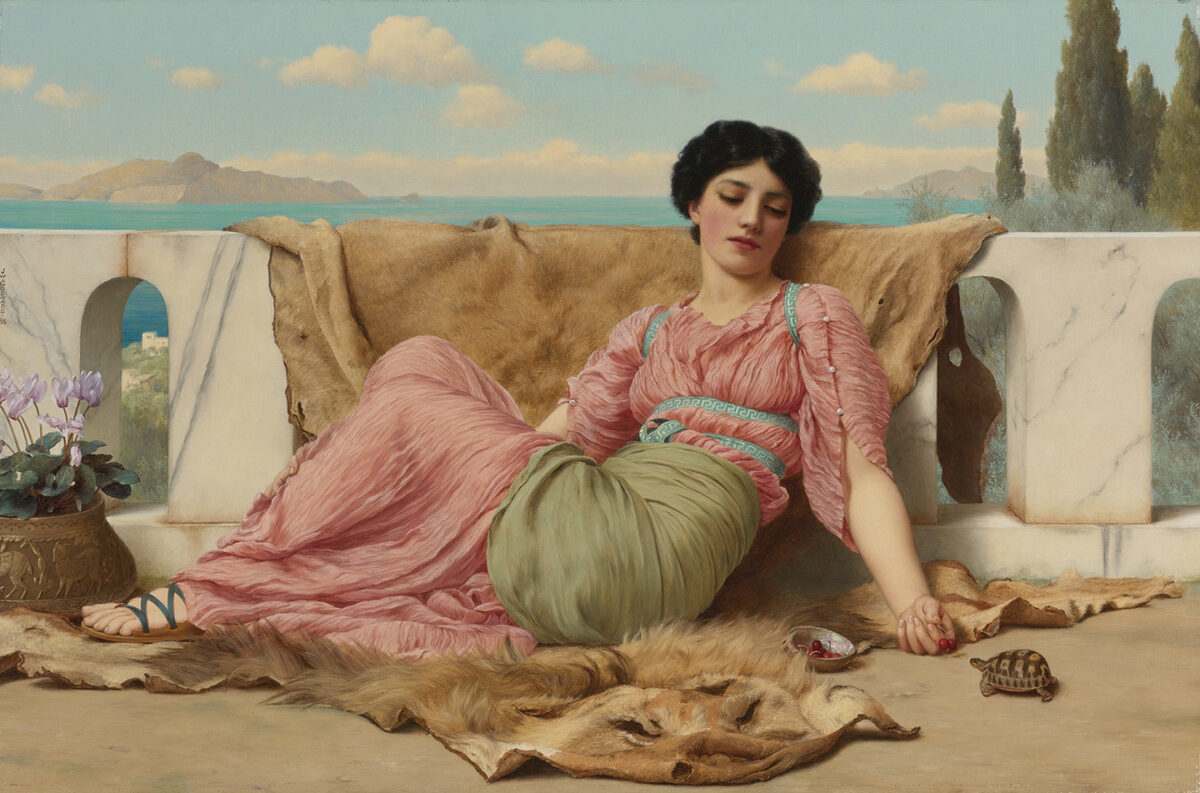 John William Godward (1861–1922) was a neoclassical painter of the Victorian era. He established a reputation for his careful rendering of details and the ability to convey contrasting textures: flesh, marble, fur, and fabrics. From his London studio, Godward created romantic worlds that featured women bathed in soft light against Mediterranean dreamscapes.

At first sight, Godward’s paintings are an aesthetically pleasing symphony of beautiful women, colorful flowers, and meticulously detailed textures. Was his intention to paint scenes for the sake of beauty, also known as “art for art’s sake,” or did he intend hidden messages beneath the surface?

When digging a little deeper into the elements that tie his seemingly innocent dreamscapes together, we find some potential moral lessons on decadence.

Godward, the protégé of Sir Lawrence Alma-Tadema, Victorian England’s most celebrated artist, similarly depicted scenes of the luxury and decadence of the Roman Empire. Whether Godward purposefully selected moral symbolism for his artwork is unknown, yet his paintings are full of ancient moral symbolism while nonetheless paying tribute to the sensibilities of Victorian times.

In his painting “Idleness” (1900), a young woman teases a kitten with a peacock feather. The peacock—the type of feather that the woman is holding—was a common tool for depicting morality in 19th-century art and literature.

Since peacocks strut when displaying their beautiful plumage, they have been symbolically connected with the sins of pride and vanity. In Renaissance art, for example, the peacock often appeared in the Flemish masters’ depictions of the Seven Deadly Sins.

Reverend Thomas Dick, author of “On the Mental Illumination and Moral Improvement of Mankind” (1836), tells his readers: “Be not like the peacock, proud and vain, on account of your beauty and your fine clothes; humility and goodness are always to be preferred to beauty.”

“Idleness” might be viewed as a careful examination of a relaxed summer afternoon. Godward’s selections of colors and symbolism acknowledge the cultural trends of the Victorian times. According to designer George Audsley’s book “Color in Dress” (1870), the color yellow was believed to be most similar to light and therefore best suited to wear in spring and early summer. Audsley wrote: “The effect of yellow upon the mind is of a bright, gay, gladdening nature, owing its likeness to light, both natural and artificial.”

The pink oleander flowers that frame the seated woman contribute to the theme of summertime, as blossoms tend to peak during the spring and summer months. In addition, pink was often associated with youth and playfulness. But at the same time, the symbolism of the oleander flower meant “beware” in the Victorian language of flowers.

In his 1906 painting “The Quiet Pet,” we view another scene of a young, beautiful woman beckoning an animal. Bathed in warm light, this painting is likewise set against a late summer, Mediterranean backdrop. The ripened cherries the woman is holding as well as the potted cyclamen flowers allude to the late summer and early autumn season on the coast of Greece.

“The Quiet Pet” can also be viewed as a modern reference to Eve in the Garden of Eden. The cyclamen flowers in Victorian flower language were associated with resignation or submission and were often given as a farewell gift.

The cyclamen, however, has had multiple associations across cultures and throughout the generations. The Greek physician, botanist, and pharmacologist Pedanius Dioscorides (first century A.D.) referred to the cyclamen as an aphrodisiac. In Christian symbolism, the cyclamen flower represented the Virgin.

Whether this painting was referencing a young girl’s submission to desire is unknown. However, in both paintings, we can learn from the symbolism. Both the peacock feather and the cherries that are being used as bait allude to two of the seven deadly sins: pride and lust. The pink oleander flowers from the kitten painting signify a warning for the viewer to beware: Beware of vanity and pride as a lure or false illusion. The turtle that has long been associated with slow and patient persistence can be a reminder to not be hasty to submit or resign our values. We are all familiar with the story of Eve and the fall of humanity. With patience and humility, we will reap the fruits of our labor in time.