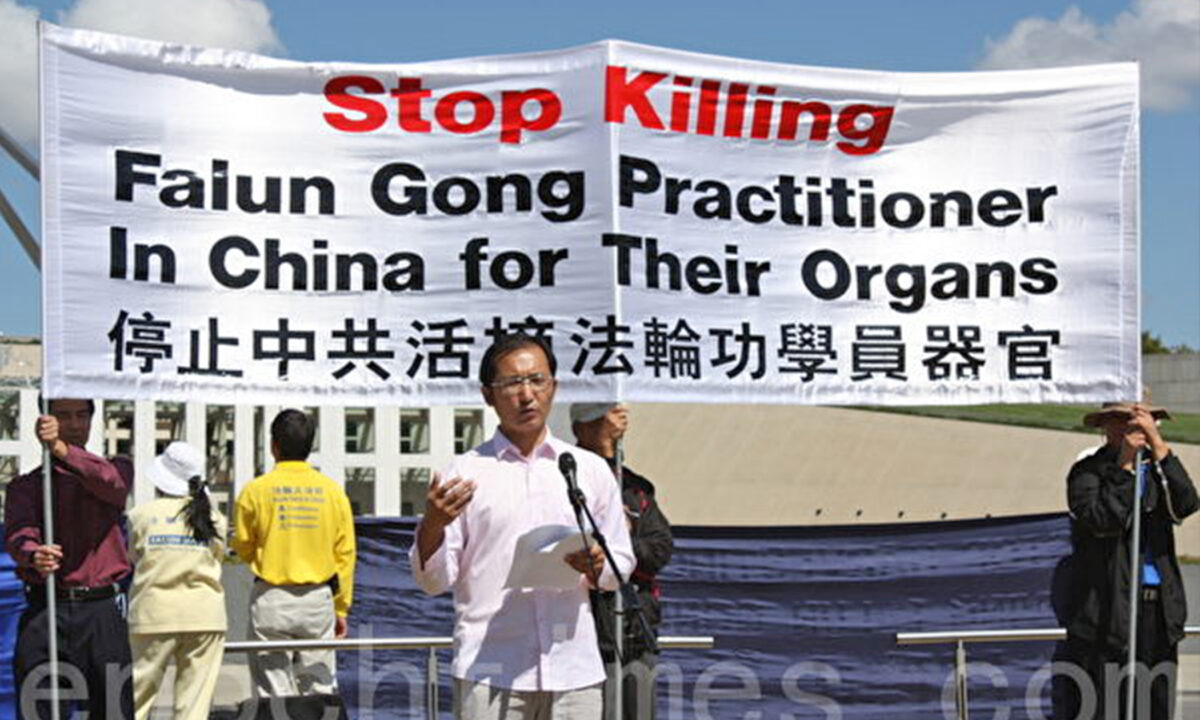 Liu Jintao, a labor camp survivor at a rally held in front of the Australian Parliament in Canberra on March 20, 2013. (Luo Ya/The Epoch Times)
People

When Liu Jintao (Tony), a former graduate student of China University of Petroleum, was locked in a cell at the Beijing Tuanhe Labour Re-education Dispatch Centre in 2007, an inmate ran in from outside to pass a guard’s order: “Don’t damage his organs.”

Recalling the horrors of the persecution he endured in communist China, Liu told the Chinese edition of The Epoch Times that he was surprised by the order as a drug addict inmate was beating his back and waist at that time.

“I felt strange why these guys did not care about my well-being but cared about my organs,” the 39-year-old said in his testimony submitted to The Independent Tribunal Into Forced Organ Harvesting of Prisoners of Conscience in China, known as the China Tribunal.

Before Liu was arrested, he had already learned about the state-run forced organ harvesting ongoing in China since the early 2000s. However, Liu said he couldn’t believe it.

“Every year during my detention, the authorities would force us to have blood taken and X-rays but never notified me of any result. I suspicious [sic] that these tests may have been somehow connected to organ harvesting,” Liu told the China Tribunal.

Liu, who was arrested for practicing the Falun Gong spiritual discipline, said one day he overheard a drug addict telling other addicts how “a Beijing woman’s husband (a Falun Gong practitioner) disappeared after being arrested.”

Falun Gong, also known as Falun Dafa, is a cultivation practice of mind, body, and spirit based on the principles of Truthfulness, Compassion, and Tolerance. In July 1999, seven years after the practice was introduced to China, the Chinese Communist Party (CCP) launched a brutal persecution of Falun Gong and its tens of millions of adherents, perceiving the spiritual practice as a threat to the atheist ideology of the communist party. Since then, numerous Falun Gong practitioners have been arrested, detained, and tortured in China.

Liu, who started practicing Falun Gong in August 1997, was one of them, and the torture he endured for refusing to get “transformed” is hard to describe.

Liu recalled that it was way back in November 2006—while he was studying for a Master’s degree at the China University of Petroleum in Beijing—when a group of police officers went to his classroom and arrested him.

“A group of maybe five or six men from state security and 610 Office came to my classroom, and they found Falun Gong material on my computer and the Nine commentaries on the Communist Party by Epoch Times,” Liu told the China Tribunal.

“I asked them ‘why are you arresting me?’ and ‘where is your search warrant?’ Then one police officer took out a piece of paper and chucked it in front of me and said ‘this is the paper that authorizes your arrest,’” Liu recalled. “Without [any] court process, I was illegally detained for two years’ forced labor camp.”

He was later transferred to Beijing Changping Brainwashing Class, where he said he was forced to watch videos slandering Falun Gong. However, this was just the beginning of the horrific persecution after being incarcerated for his faith.

Liu told the China Tribunal that after he was detained at Beijing Tuanhe labor camp in November 2007, he endured endless abuses: He was starved, beaten, shocked with electric batons, sleep-deprived, force-fed through a tube that was mixed with urine, and had his own feces shoved into his mouth. Liu added that the guards ordered criminal inmates to spit on him and even forced his mouth open and spit directly into his mouth, and once, the prisoners also stripped off his clothes and forced a toilet brush handle into his anus.

“They pushed the handle so hard that I couldn’t defecate,” he said. “They also handled my genitals and forced my back against an extremely hot heating unit. They also pinched my nipples hard with their nails.

“They woke me at night by pouring cold water on me, or by piercing my skin with needles. They then dragged me to the ground, stripped me, and poured cold water over me.”

In addition to the torture, authorities also drew blood from Liu and other detained Falun Gong practitioners. They also had an X-ray taken. However, as they were never informed of the test results, suspicions grew stronger that the tests could be linked to organ harvesting.

The report stated that Falun Gong practitioners were “frequently given blood tests and medical examinations while other prisoners (with the exception of Uyghurs, Tibetans, and certain House Christian groups who were also targeted) receive no such treatment.”

“The ultimate conclusion of this update and indeed our previous work, is that China has engaged in the mass killing of prisoners of conscience, primarily practitioners of the spiritual-based exercises Falun Gong, but also Uyghurs, Tibetans, and select House Christians, in order to obtain organs for transplants,” Matas said.

Unable to bear the gruesome torture and abuse any longer in November 2007, Liu signed a statement to renounce his faith, and eventually fled to Australia in 2013 with his wife and sought asylum.

Liu told the tribunal: “I finally could not bear the tortures from the labor camp, and wrote the ‘Three Statements’ in violation of my heart. … Under those tortures, I was completely beaten. I feel that I have betrayed my belief, sold my soul and conscience in order not to be persecuted, and live like a walking dead.”

He said he wanted to go abroad to “expose the persecution of the evil party,” and have “an excuse” to persuade himself to live.

After a narrow escape from forced organ harvesting, Liu is now speaking out for the numerous Falun Gong practitioners who are still detained in China and face a similar fate.

“It is really a different world in Australia,” he said at a rally held in front of the Australian Parliament in Canberra in 2013.

“I can freely talk about the truth of the persecution. Many Chinese Falun Gong practitioners are still being tortured in China. I hope that the international society can help stop it and bring the murderers to justice.”