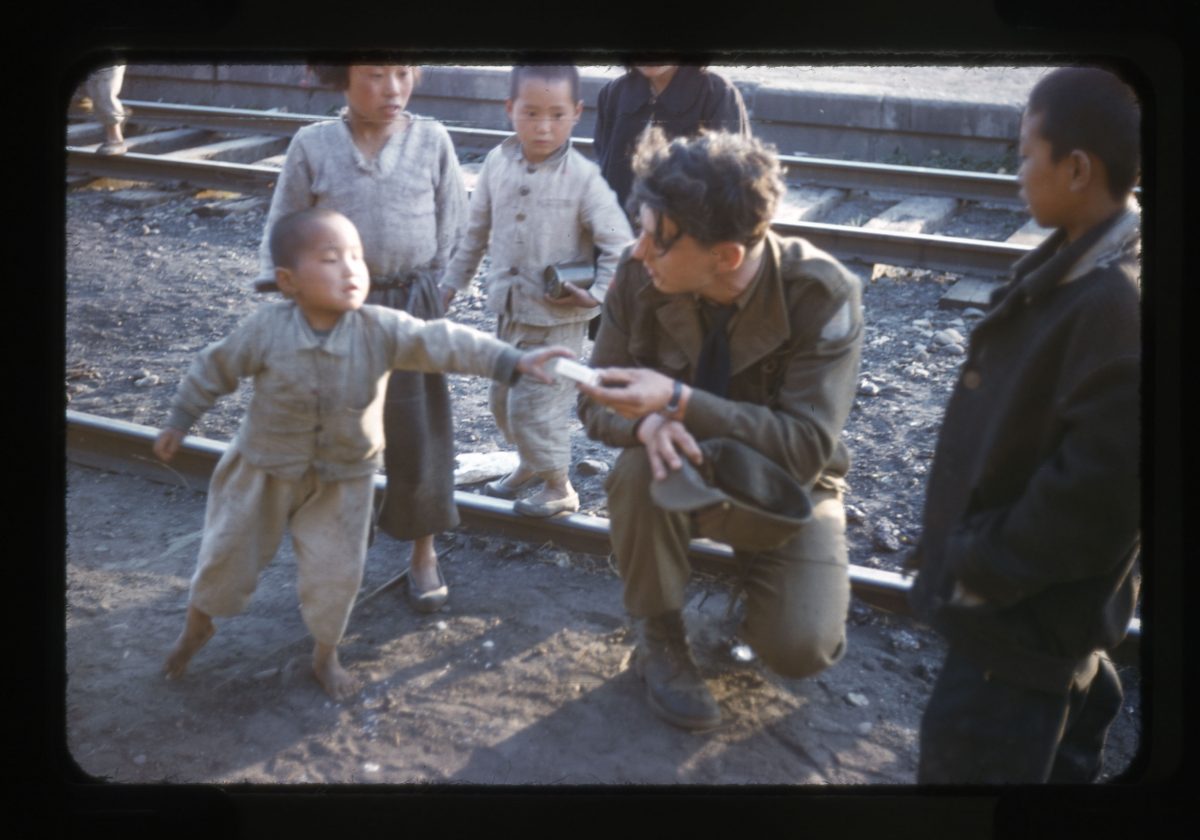 Korea 60 at the Canadian War Museum

On a long wall of the Canadian War Museum’s lobby area is a straightforward display of photographs, diagrams, and short didactic texts titled Korea 60. Visitors would be well advised to linger a little longer in front of this quiet display.

Korea 60 displays black-and-white photographs of military encampments, field manoeuvres, and a field ambulance with its corpsmen. There are photographs of troops identified as soldiers from the 1st and 2nd Battalions of the Royal Canadian Regiment, and those known more colloquially as the “Princess Pats” and the “Vandoos,” among others.

Many of the photographs come from private collections. They are the sort of pictures soldiers bring home from war, paste in an album, then have little to say about them one way or the other.

The photographs are not dramatic images of bombs bursting in the air. They are photographs of tired, stressed men, taken by other soldiers who are not professional photographers.

One, for example, shows a group of soldiers sitting on the floor in the corridor of a ship. The ship is identified as the USN Marine Lynx, one of several U.S. Navy vessels used to bring home Canadian troops early in 1954 from Korea. The soldiers are playing cards. Almost certainly, the stakes of their game are not nearly so high as merely a few days or weeks earlier when their lives were at risk.

On June 25, 1950, Communist North Korea crossed the 38th parallel to begin its invasion of the Republic of Korea in the south. In short order, Chinese troops joined the fight on the side of North Korea. In response, the United Nations Security Council voted to send international troops to defend South Korea. Seventeen nations sent their forces, including Canada.

More than 25,000 Canadian troops fought in Korea in the war; 516 died. Most of the Canadian dead lie buried in a U.N. cemetery in Busan, Korea. The names of four other Canadian dead are noted on a plaque in the cemetery. Their bodies were never recovered.

The photograph labelled “Hill 355, October 1952″ will have intense meaning for those who know the story of that fierce, sustained attack by Chinese troops. Canadian losses were heavy—191 men from the 1st Battalion of the Royal Canadian Regiment were killed.

Peace talks to end the conflict began late in 1951. Among the photographs on the museum’s wall are pictures of men gathered around tables, trying again and again to find appropriate words for an agreement to stop the fighting.

An armistice was not signed until July 27, 1953. One of the wall texts, accompanying a photograph of troops at their duty stations several months later, comments: “Fresh troops monitored an uneasy peace.”

The peace remains an uneasy one. Only last week, an 85-year-old American tourist named Merrill Newman was arrested in Pyonyang, N.Korea, because of his role in the Korean War.

In all wars, soldiers are more likely to bring home photographs of moments when the shelling stopped. One of the photographs in Korea 60 is a classic example of such moments. It shows a soldier kneeling. He is not wearing his helmet, nor is his rifle at hand. Instead, the unidentified Canadian soldier is giving out candies to a group of Korean children gathered around him.

The photograph might have come from any war of the 20th century in which Canadian forces served. In all, 30,000 Canadians have served under the U.N. flag in Korea.

Maureen Korp, PhD is an independent scholar, curator, and writer who lives in Ottawa. Author of many publications, she has lectured in Asia, Europe, and North America on the histories of art and religions. Email: miki.korp@gmail.com