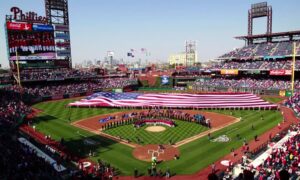 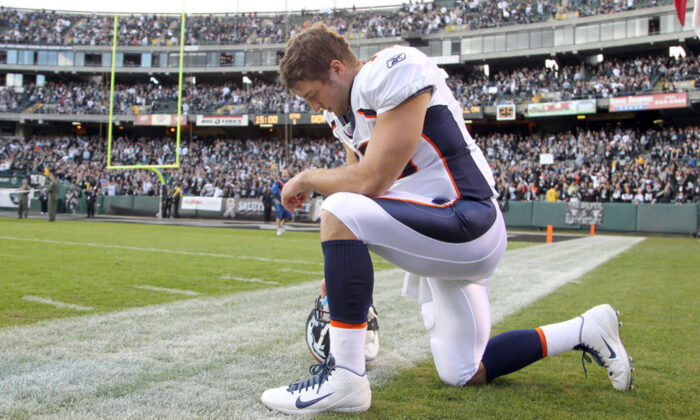 ‘Know Their Heart’: What Sports Stars Colin Kaepernick and Tim Tebow Kneeled For

Colin Kaepernick and Tim Tebow have both made names for themselves on the football field in some way, shape, or form. Among other things, both have also made headlines for bringing their messages, different messages, onto the field by kneeling before football games. What are those messages?

Kaepernick, 32, played six NFL seasons for the San Francisco 49ers before becoming a free agent in March 2017. Tebow, 32, is a former NFL quarterback who now plays in Major League Baseball for the New York Mets.

Each man has his own individual reasons for kneeling.

According to ESPN, Kaepernick was adopted as a 5-week-old baby by Rick and Teresa Kaepernick of Milwaukee after his birth father left his 19-year-old birth mother alone and unable to care for her baby. Kaepernick was baptized Methodist, confirmed Lutheran, and joined a Baptist church during his college years.

In 2016, Kaepernick chose to remain seated and later chose to kneel in what would become a habitual practice during on-field renditions of the Star Spangled Banner. The player explained that he was kneeling in protest of police violence against black people and to show his allegiance with the Black Lives Matter movement.

“I am not going to stand up to show pride in a flag for a country that oppresses black people and people of color,” he explained to NFL Media. “To me, this is bigger than football, and it would be selfish on my part to look the other way. There are bodies in the street and people getting paid leave and getting away with murder.”

Kaepernick pledged to continue kneeling during the national anthem until he felt that the American flag “represents what it’s supposed to represent,” inciting a backlash from the public, fans, and even the NFL.

During the off-season, the polarizing civil rights activist supported other ventures, including a GoFundMe page started in collaboration with other celebrities to raise money to fly food and water into Somalia, which surpassed a $2 million goal in four days; Kaepernick also pledged to donate $1 million of his own money to charity.

Kaepernick has not played for the NFL since 2017.

According to The Gazette, former quarterback Tim Tebow was home-schooled by his Christian parents and spent considerable time in the Philippines, where his parents were missionaries. As an adult, Tebow is a vocal member of the Fellowship of Christian Athletes, is actively pro life, and has spread the word of his faith in prisons, schools, and youth groups internationally.

The sports star also founded the Tim Tebow Foundation with a mission statement “to bring Faith, Hope and Love to those needing a brighter day in their darkest hour of need.”

Tebow is just as well known for his signature move, “Tebowing,” dropping to one knee on the football field in prayer. Notably, however, Tebow has never knelt during a national anthem.

“I did it from my sophomore year in high school all the way through the NFL,” Tebow explained in June 2018, as quoted by USA Today. “[B]efore and after games I would get on a knee to thank my Lord and savior, Jesus Christ, and also put things into perspective.”

Mike Frost, vice principal of Morling Christian College in Sydney, Australia, has argued that Kaepernick and Tebow’s kneeling rituals can be respectively interpreted as a “social” and a “personal” facet of Christian morality.

“One is rallying at the March for Life,” Frost write on his blog site. “The other is getting arrested at Moral Monday protests.”

“The bifurcation of contemporary Christianity into two distinct branches is leaving the church all the poorer, with each side needing to be enriched by the biblical vision of the other,” Frost continued.

For Tebow, in any act of prayer or protest, intention is key. “I appreciate it when people have convictions and they stand for that,” he said, reports USA Today. “I think what’s more important is to know their heart and where they’re coming from, and where the conviction stands in their heart.”