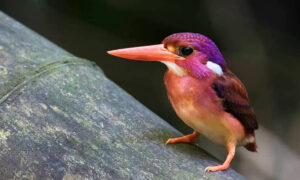 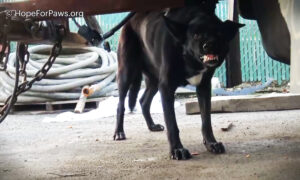 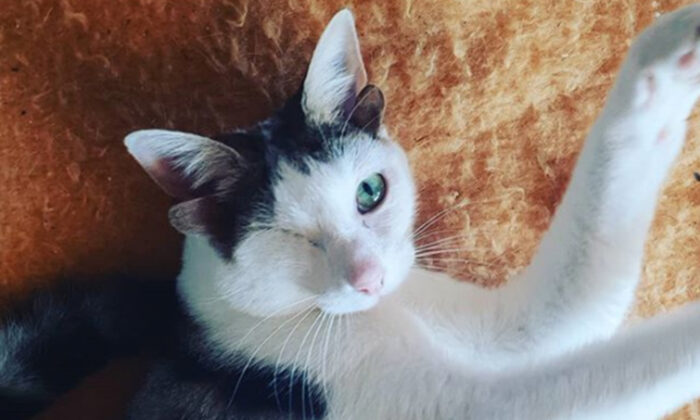 When rescuers found Frankie living under a house in the Melbourne suburb of Geelong, they saw that his right eye was deformed, and even more amazingly, in addition to his normal, pointy cat ears, he had an extra set of smaller ears, as well.

The unusual 10-week-old kitten was found along with his brother, and they were both brought to the Geelong Animal Welfare Society (GAWS) for assessment and treatment. The unconventional-looking kitten was given the name Frankenkitten, or Frankie for short.

One of the shelter volunteers, Georgia Anderson, soon became enamored with Frankie. “He would have been in a lot of pain, but the first thing he did when I picked him up was purr and rub his face on mine,” she told The Dodo. “I told the girls in the vet clinic that I would foster him for recovery after his eye removal.”

Besides the pain from his eye operation, Frankie’s prognosis looked positive, provided that he could get some downtime in a safe place, which is exactly what Anderson was able to provide.

“I’ve probably fostered around 80 cats and kittens in the last year,” Anderson added. In addition to all those that have found temporary refuge at her house, Anderson also has three cats of her own: Toothless, Mina, and Lucius Malfoy, as well as a rescued beagle named Dudley. At first, her plan for Frankie was just to give him a place to recuperate.

“When I got him home, he was very dopey and in pain, but still had so much love and affection for me, the kids and other animals,” she said. “By the next morning, I’d decided that I wanted to keep him.” Seeing the way he fit perfectly into her house (four ears, one eye, and all), Anderson couldn’t help but give him a forever home.

As for Frankie’s special anatomical feature—his extra set of ears—they appear to be a genetic abnormality. “Cats presenting with 4 ears have typically only been found in feral cat populations, so the main theory is that it is a result of long-term multigenerational inbreeding,” Anderson explained via Facebook.

Frankie’s extra ears do affect his directional hearing ability somewhat but don’t seem to cause many other problems. In addition to eye trouble, though, Frankie has other issues, such as problems with his hind leg, intellectual disabilities, and not least of all, his teeth.

After waiting for Frankie to grow up a little, vets had to remove his lower incisors at around five months. Otherwise, they would have damaged his upper palate when he closed his mouth. Meanwhile, he gets to keep his upper canines, which means they might hang out of his mouth like “little vampire teeth,” Anderson says.

“None of this seems to affect his playing, as he is constantly tearing around the house,” Anderson adds. Her three other foster cats have provided an excellent social environment that Frankie quickly made himself part of. He is often seen “zooming around the house” with his siblings, and he loves “rough-and-tumble play,” according to Anderson.
Frankie has also gained a huge following online with adorable pictures of him on Facebook and Instagram. In addition, he’s also created a special bond with his human brother, Anderson’s son Arthur. “They’re great together,” she told the Geelong Advertiser.

Above all, Anderson doesn’t want people to see Frankie as an object of pity or as a “disabled” cat. As she posted on his Instagram account, “Never, ever feel sorry for me. I am a HAPPY cat.”

Frankie’s human mom hopes that his story will encourage others to take a chance on pets that might look a little different on the outside but have a lot of love and life inside of them.
TOP NEWS