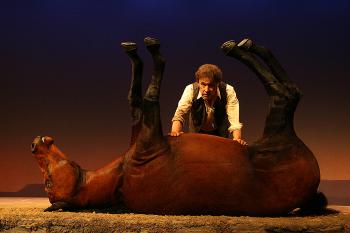 By Judd Hollander and Special to The Epoch Times
biggersmaller
Print

A sobering walk in a dreamer's shoes

NEW YORK—Dripping in symbolism (with more than a bit of mysticism thrown in) and a title both figurative and literal, playwright Sam Shepard (who does double duty as director) debunks the myths of the American west as seen through the eyes of disillusioned dreamer in the very interesting and involving Kicking A Dead Horse. A co-production with the Abbey Theatre of Ireland, the show is now playing at the Public Theater off Broadway.

In the lonely emptiness of the western plains, Hobart Struther (an excellent Stephen Rea), a middle-aged once upon a time cowboy is alone and in trouble. Barely a day after he set off on a quest into the wilderness, his horse suddenly died. Now he finds himself alone, with no way to get back to civilization. He isn't even sure where he parked his car and trailer. (Ambiguous at first, it quickly becomes apparent the story is set in the present day.)

Hobart has long dreamed of the mythic west but never really found it. As a young man, he worked on one of the big cattle ranches, and during his time off, started buying up paintings of the old west by such American masters such as Frederic Remington and Charlie Russell from people who had no idea of their true value. He then turned around and sold them for hundreds of thousands of dollars apiece, becoming a wealthy art dealer in the process. However Hobart always felt guilty for getting rich off his dreams, to the point he finally had enough, closing his business and coming back to the country he's always loved, and where he may now soon die.

As he takes stock of his situation (in between attempting to bury his horse), Hobart begins to have conversations with himself, his inner voice mocking him for trying to believe in a dream which never really existed. After all, the text points out, the west was built on the backs and murdered bodies of Indians, Blacks, Chinese and Mexicans; not to mention how we raped the land in search of gold and often invaded sovereign territory (Indian nations) in the name of progress and expansion.

If things can seem rather preachy at times (as Sheppard is wont to be), the relatively short running time and Rea's wonderful performance more than make up for it. Watching Hobart's psyche at war with himself is quite fascinating, no more so than when he is forced to leave behind anything not necessary to his survival, including his saddle, bridle, spurs and hat. As he tosses these items into the horse's grave, the playwright is literally burying the symbols of the West. But the deeper irony Shepard seems to be pointing out is not the lack of authenticity of Hobart's dreams ("authenticity" being a catchword in the play), but rather that they do exist, but often one is too cynical to recognize them. A point brought home when Hobart is unexpectedly visited by a spirit (Elissa Piszel) of this perhaps not-so-make-believe era.

Rea is perfect in the role of the aging and emotionally broken dreamer, yearning to live the life he always fantasized about, only to have nature and the elements conspire against him. One can feel the pain in his body, the ache in his voice and the sheer tiredness of a man who has been beaten down by unrealistic expectations and a failure to see life for what it is and what it could be, instead of what he wants it to be. This is a man with passions all too familiar to audiences, (albeit perhaps not the exact circumstances), and thus ones easy to understand.

In addition to the richness of the text, Shepard does a wonderful job directing his own work, deftly creating an atmosphere of both beauty and solitude, and nicely leavening the immenseness of his message with generous amounts of black humor—all of which combine to show that things are never simply what they seem, or what we might wish them to be.

The scenic design by Brien Vahey is quite good, not only adding a feeling of authenticity but also providing one of the more unusual opening moments of a play in recent memory. Consumes by Joan Bergin are fine, as is the lighting by John Comiskey, and sound design by Dan Moses Schreier.