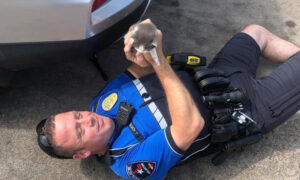 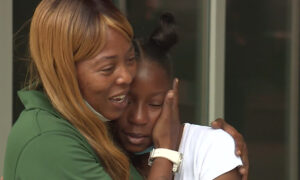 Three police officers came through for a 9-month-old baby girl after her carers were killed in a car crash at a Kentucky intersection.

The officers from the Shively Police Department retrieved the injured baby girl from the wreckage and rushed her to the hospital in the back of their cruiser.

They had been following a stolen pickup truck just before midnight on July 27 when the driver of the stolen vehicle ran a red light at the intersection of Dixie Highway and Crums Lane and collided with two other vehicles.

Two adults, Stephaun Dotson, 21, and his mother, Ann-Janette Senter, 44, were killed in the crash, while an infant was critically injured.

Dotson’s father, Quantez, later confirmed that the baby was being looked after by his ex-wife Ann-Janette.

Louisville Metro Police officers Javar Downs, Kyle Willis, and Darrell Wagner, pursuing the vehicle, had witnessed the crash and pulled up to the intersection as the stolen truck sped away. They exited their vehicle and rushed to help.

The rescuers cut through a rear air bag and car seat to reach the baby girl. They moved her to the back of their cruiser and drove directly to Norton Children’s Hospital in Louisville, blocking off roads to expedite the journey as they went. She was admitted to the ICU.

On July 30, Shively Police arrested 20-year-old Guy Brison, who is facing 13 felony charges, including two for murder. The 17-year-old passenger of the vehicle was also taken into custody.

Meanwhile, the 9-month-old baby is still fighting for her life.

“Just to hear she’s a fighter, it gives us energy to keep putting this uniform on and keep doing this job,” said officer Downs, who is an uncle. “It means the world to me, it really does, that she’s still fighting.”

“We’re not only police officers,” Willis explained, reflecting on the incident, “we’re dads, or cousins, or brothers, and we have hearts. You know, we break down just like everybody else.

“If we just saved that one child’s life, that’d be the huge difference that would mean everything.”

Downs added that he and his colleagues are black men as well as being police officers, who understand what the community is feeling.

“I really want them to know that we’re here,” he implored. “We’ll continue our commitment to service and doing our jobs, professionally and continuing to save lives, and making a difference.”

Officer Willis, a father, added, “Seeing this child that was innocent and hurt. I’m tearing up now, just thinking about it. It’s emotional. You gotta be human. We’re police officers, but we’re human.”