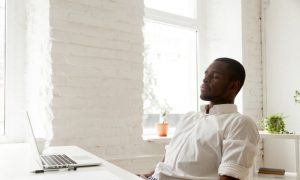 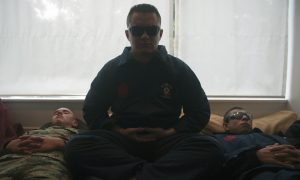 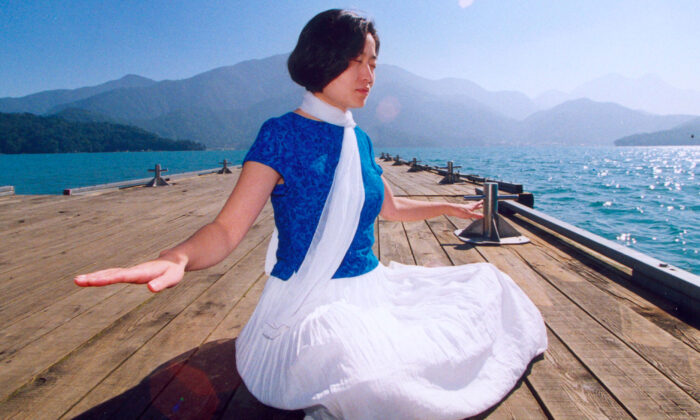 A woman doing Falun Dafa meditation. After an experiment with brain scans, a group of longtime meditators were able to transform the anatomy of the brain in surprising ways. (Minghui.org)
Mind & Body

Keeping the Mind From Undermining the Body

Within the span of just a few months, the world has descended into a worldwide pandemic. As the number of deaths, scandals, and social restrictions escalate, it’s anyone’s guess as to what will happen next.

The sense of uncertainty can be stressful, scary, even infuriating. These feelings are a natural reaction to a crisis. But if left to fester, they can take a toll on our immune systems right at the time when we need them most. Since the early 2000s, several hundred studies have shown that those who carry chronic stress are more vulnerable to infection.

So how can we reliably rein in our anxiety? Instead of seeking outside distractions—like constantly scanning the news, and indulging our vices in order to cope—consider that true peace of mind only comes from within.

A Montana resident and mother, Rene Nazelrod, believes that meditation can not only heal our bodies, but the planet at large. With a daughter living in Japan, a son who is moving to California, and an elderly mother with cancer, Nazelrod admits to moments of panic and worry about how the pandemic will affect her family. She says meditation tames her inner chaos, and she encourages everyone to join her for at least one minute a week.

Nazelrod’s Instagram page, “The One Minute Movement” promotes the activity—a one-minute meditation every Friday at 5 p.m. Mountain Daylight Time. You don’t have to sign up, there’s no Zoom conference to join, and no dogma to adopt. Participation is free, and the time commitment is short.

“When I first posted this, I had friends texting me who I hadn’t talked to in a long time saying, ‘Not only did I think about it before 5 o’clock on Friday, I thought about it the whole next day,’” Nazelrod said.

Nazelrod has meditated regularly for years. The idea for a collective meditation minute came to her when she heard that basketball games were canceled.

“I used to watch basketball with my husband when I was pregnant with my son. And it really hit me. Think of the collective energy when you’re at a basketball game. You’re in the final minute. It’s the last free throw. You can cut the energy with a knife. I thought, we can do that in the world by all coming together for one minute and starting to meditate and pray,” she said.

While the idea may seem naïve and blindly optimistic, research shows that meditation can help with the chronic stress triggered by the collective freak-out so many are currently experiencing. The activity might not be approved by the U.S. Food and Drug Administration, but scientists have shown that it can improve our mental and physical health.

Although meditation is typically seen as an activity of the mind, it may also help improve our body, leading to better immune function, through stress reduction. Several studies over the last few decades suggest that meditation can ease many of the symptoms caused by chronic stress, such as depression, anxiety, pain, and insomnia.

A 2017 review published in the journal Frontiers in Immunology found that meditation and other mind-body interventions can actually “reverse” the molecular reactions in our DNA which cause illness.

Once again, stress is at the heart of this process. When people are exposed to a stressful event, their ‘fight-or-flight’ response is triggered. This increases the production of a molecule called nuclear factor kappa B (NF-kB), which regulates how our genes are expressed.

NF-kB activates genes to produce proteins called cytokines that cause inflammation at the cellular level. This reaction is useful as a short-lived fight-or-flight reaction. But when stress becomes chronic, it can lead to a higher risk of cancer, accelerated aging, pain, and depression.

Researchers have found that meditators exhibit the opposite effect—a decrease in production of NF-kB and cytokines. This leads to a reversal of the pro-inflammatory gene expression pattern and a risk reduction of inflammatory diseases.

Meditation leaves “a molecular signature in our cells, which reverses the effect that stress or anxiety would have on the body by changing how our genes are expressed,” says Ivana Buric, the review’s lead investigator from the Brain, Belief, and Behaviour Lab in Coventry University’s Centre for Psychology, Behaviour, and Achievement, in a release.

Prayer—a kind of meditation with intention—has also been shown in some studies to have psychological and social benefits.

“I understand that there are skeptics who will say, ‘if this doesn’t cure coronavirus tomorrow, then it didn’t work.’ Well, we don’t know exactly what it does,” Nazelrod said. “Why can’t we just do good without being connected to the outcome?”

Meditation has been known to benefit mind and body for ages, but the scientific understanding of how it works remains murky. Some suggest that meditation’s power is merely the result of the placebo effect—the idea that simply because you believe, a certain amount of well-being will result.

Drugmakers typically look at the placebo effect as more of a statistical inconvenience than an actual benefit, but the phenomenon studied on its own has shown in published research to have great potential for healing.

“Let’s turn that belief to ourselves and to the world,” Nazelrod said.

How to Do It

Meditation is simply a method to calm the mind. The idea is that if your mind is clear and content, you’ll make better choices, and avoid responding to life in an agitated and reactionary manner.

It’s basically the opposite of what advertisers and some politicians do when they try to get you angry about or lusting after whatever suits their agenda, be it dissuading you from voting for the other guy, or buying that amazing new product that’s supposed to change your life.

You don’t need a study to see that the better people are at remaining calm and clear in the midst of a crisis, the better world we’re bound to have. Even so, meditating for the first time can seem silly, awkward, and intimidating. How should you sit? What are you supposed to be thinking? What if your mind won’t stop racing?

Nazelrod offers a simple technique for beginners: focus on your breathing, and concentrate on slowing it down.

Since the goal of meditation is a quiet mind, you might think it’s better to learn it in a moment of calm, where you don’t have to work so hard to drown out the nagging worries that can infect your inner dialogue.  But experts say the opposite is true. According to psychoanalyst and Buddhist meditation teacher Dr. Pilar Jennings, crisis offers a unique opportunity to turn inward. Jennings will offer a class later this year on coping with anxiety in a time of crisis.

“One of the interesting things about acute experience is that it frequently inspires people who didn’t have any prior conscious interest in spirituality to come to some new longing for a sense of meaning and refuge,” Jennings says.

“It gets back to that old adage: ‘There are no atheists in a foxhole.’ If the suffering becomes acute enough, those very deep layers of the psyche that push for meaning will start to surface. People start to wonder: What is this life about? How have I been living it? Who is really there for me?”

When fears and anxieties start to emerge, Jennings says don’t try to stifle them. Just observe them. She says when people can make room for these feelings rather than trying to eradicate them, their minds become recalibrated, and begin to relax.

“Trying to get rid of those feelings is what fuels things like addiction, binge eating, excessive drinking,” she said.

Some meditation practices rely on breathing exercises, chanting, drumming, or some other technique to help get you in the zone. One reliable path to stillness that everyone can call on is nature.

Jennings says people can look to nature for meditation guidance because it allows you to become aware that you are part of a larger reality that is much more than any of your individual concerns or worries.

“And that’s a relief,” she said. “It’s a little counter-intuitive, because we often think that if we stop worrying about ourselves then everything will fall apart. But when we can settle that worry, and it happens very easily when we’re staring at a beautiful body of water or walking in a park, there is a sense of being part of the natural world.

“And, of course, the world will continue without us.”

Another helpful aspect of nature in guiding the journey inward is that it slows things down. Tuning in to the waves, wind rustling leaves, or the song of a bird can be a balm to the racing mind. When we succumb to nature’s rhythm, we start to notice more because there’s less pressure. We can think things through in ways our day-to-day pace might not allow.

These lessons from the natural world echo the same theme found in most spiritual traditions: self-transcendence. Although meditation starts with a journey inward, it often leads to ideas about what we can do to alleviate the suffering of others and make the world a better place.

“It’s about feeling into a bigger reality that helps soften that grip on self. This situation offers people lots of opportunities to do service and to orient toward the collective,” Jennings says.

Anxiety is, by contrast, an isolating affair.

When we can connect to the larger scope of life, it naturally has a positive effect on our mood and our well-being. While current physical distance requirements restrict some of our abilities to connect, Nazelrod says we can still join together in meaningful ways.

It’s hard to say what might happen when people come together in meditation for a single minute. But you can start to see benefits on a small scale. The more you meditate, the better you can apply that calm yet focused mindset to the rest of your life, even in times of crisis. As a result, you’re more likely to be patient with neighbors, strangers, friends, family members, or anyone you encounter who is agitated or upset.

Instead of trying to offer direct advice about what to do and how to stop it, Jennings suggests just listening to where they’re at.

The same principle applies to yourself. If and when you get rattled, or make poor decisions because you’re reacting out of fear or anger rather than reason, don’t beat yourself up or try to bury it. Instead, take a deep breath, and just observe it. This makes it much easier to let it go.

“Practice some self-compassion,” Jennings said. “Actually, it’s an ethical act right now, because it will have ripple effects on being able to access that compassion more easily on behalf of others.”