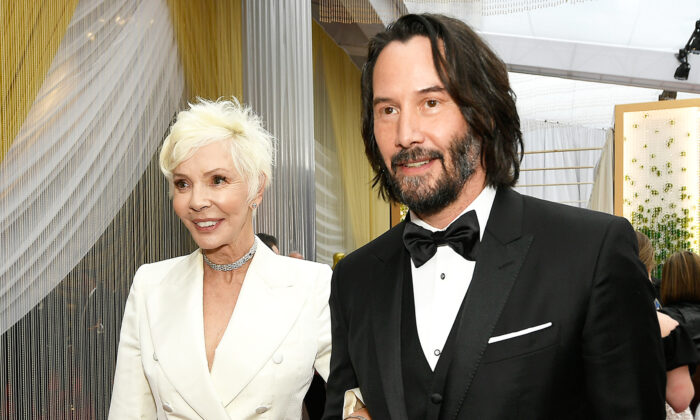 Keanu Reeves brought his mother as his date to the 92nd annual Oscars awards ceremony in Los Angeles on Feb. 9, 2020. Costume designer Patricia Taylor, who brought Keanu into the world, dazzled in a white pant suit and heels beside her Hollywood actor son, dressed in a black tuxedo.

Reeves, 55, voiced the character of “Duke Kaboom” in “Toy Story 4,” which garnered the Oscar for Best Animated Feature Film.

“It’s chaos, it’s madness, it’s fun,” Reeves told E! as he and his mother braved the gauntlet of red-carpet reporters and cameras.

Many fans had expected Reeves to be accompanied by his partner, 47-year-old artist Alexandra Grant, at the Oscars. Grant’s friend, actress Jennifer Tilly, had previously revealed to Page Six that despite only having made their first public appearance together at LACMA’s Art + Film Gala in November 2019, Reeves and Grant have been dating “for years.”

“Keanu wants to openly share his life with her,” a different, anonymous source told People. “He is extremely happy and grateful to have Alex in his life.”

However, at the 2020 Oscars, hosted by the Dolby Theater in Los Angeles, Reeves proudly greeted the paparazzi with his mother on his arm.

As per the Daily Mail, mother and son coordinated their outfits by both wearing Dolce & Gabbana. Reeves sported a D&G tuxedo and Cartier cufflinks, while Taylor, 76, donned a D&G pant suit and matching jewelry by Cartier.

After photos from the awards ceremony began to circulate on social media, fans flocked to leave supportive comments, celebrating the star—made famous by lead roles in “Point Break,” “Speed,” and both “The Matrix” and “John Wick” franchises—for his close bond with Taylor.

“Keanu Reeves came to the Oscars with his mom,” exclaimed one viewer, as per the Independent. “They look so sweet!”

“Reeves brought his mom to the Oscars and that’s what will be thawing my icy cold heart tonight,” joked another.

The actor’s father walked out on his family when Reeves was just 3 years old. Taylor raised her young son and his sister, Kim, in various cities including Sydney and New York, finally settling in Toronto when Reeves was 6. The actor then became a Canadian.

In an interview with The Guardian in 2019, Reeves acknowledged, “I definitely have a bit of the gypsy in me.”

Touching on his father’s abandonment, Reeves continued, “For sure, I think it’s definitely traumatizing. But it’s hard to know how [it affected me],” he explained, “because I don’t know what ‘the other life’ would have been, you know what I mean?”

The 2020 Oscars was a family affair for many of the stars walking the red carpet. Reeves was not the only star to bring his mother; as per Fox News, Oscar nominee Charlize Theron, 44, also arrived with her glamorous mother, Gerda Jacoba Aletta Maritz, on her arm.