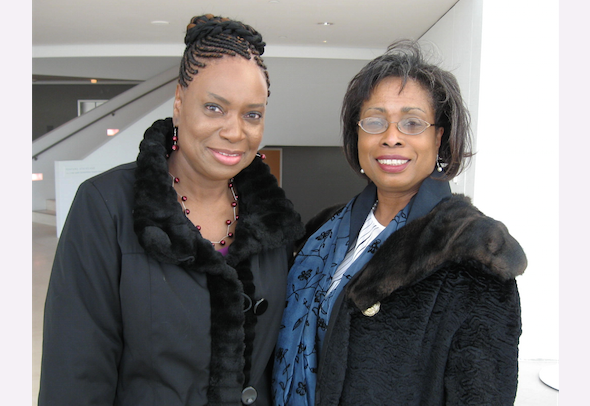 Ms. Denise Timberlake, a retired U.S. postal inspector was impressed with everything about Shen Yun dancers who took the audience on a journey of 5,000 years traditional culture, a culture almost destroyed by communist rule.

“I’m impressed,” she said. “The costumes, of course, were beautiful. I’m in a sorority so my favorite colors are pink and green, and there’s a lot of that. But, the embroidery, the embellishment, the hairpieces and the headdresses, and everything were beautiful, including the men’s outfits.

“So men are men and women are women—that was beautiful,” she exclaimed.

Ms. Chandra Mercer, also a KCMO postal employee, was equally awed by Shen Yun. “I enjoyed the use of the different tools, the drums, and the costumes with the different colors. I think that really added to the performance and that was wonderful.”

“A Doris Day looked back in their day,” added Ms. Mercer and her sister agreed.

Shen Yun made Ms. Timberlake feel “elegant, pretty, good to be a girl” and Ms. Mercer, “good to be a lady, classy.”

Ms. Timberlake explained, “The beauty of women being pretty—then, of course, …, in the temples … the women with the little heels which were really not heels, …, and they scooted and they leaped, and they jumped, and it was beautiful.”

She was referring to the dance, Ladies of the Tang Palace, which exemplifies the spirit of China’s mightiest dynasty, as stated in the program book.

Ms. Mercer related to the Shen Yun’s mission of revitalizing the traditional culture. “I think it’s a way for us to see their background, their culture, their history, because I don’t know too much about Chinese history. So, that’s a good thing, dancing is a good thing, and the way they tell their stories is good.” Her sister agreed.

Both sisters said they would recommend Shen Yun to family and friends. “Yes, come and enjoy and see the beauty and colors and dance,” said Ms. Timberlake.