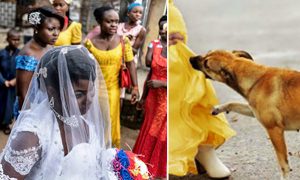 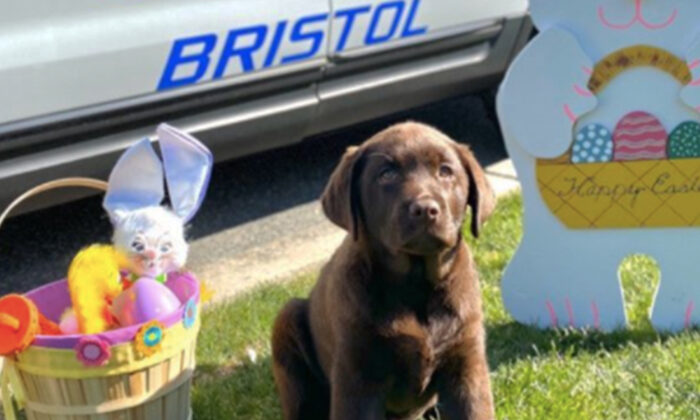 Falling asleep on the first day at work is a big no-no. But for an adorable K-9 puppy in Rhode Island, no one seems to mind that he enjoyed the now-viral nap time during his first official day on the job.

Brody, a chocolate-brown English Labrador Retriever, was sworn in as a member of the Bristol Police Department on April 6, 2020. In a Facebook Live video, the adorable K-9 puppy can be seen sprawled on a desk as his handler, Officer Keith Medeiros, took the oath on his behalf. The little pup’s name is a mix of two words, “B” from Bristol and “Rody” from Rhode Island.

The 12-week-old puppy was gifted by Boonefield Labradors, a breeder in New Hampshire that is known for breeding comfort dogs. With Brody being the department’s first comfort and therapy K-9 dog, they said Brody has an important task ahead of him: “providing a soothing environment to people during investigations.”

The cute dog will also be visiting the senior center and veteran’s home in the community and will be involved in school activities with Medeiros.

Medeiros told EastBayRI that his new partner can help deal with the mental health issues in schools by calming down the students during a crisis and also assist them in continuing their learning in class.

“That’s a huge part of his duties and job as a therapy dog,” Medeiros said.

Though Brody had been with Medeiros since mid-March, the dog had not been able to get as much exposure as Medeiros had wanted due to the social distancing rules amid the outbreak of the CCP (Chinese Communist Party) virus, commonly known as the novel coronavirus.

However, Medeiros soon discovered that Brody’s arrival was a blessing for the police force.

“People are really stressed, especially in law enforcement,” Medeiros told The Dodo, but when Brody appears in the police department, his presence instantly brightens up everyone’s day.

“They want to pet him, want to hug him and it’s just a really good thing,” Medeiros said.

It seems like Brody is already used to being around everyone in the office, including the police chief Kevin Lynch, so much so that the pup slept comfortably through the ceremony on the chief’s desk.

“We put him down on the desk and he was just so comfortable that he lay down and fell asleep,” Medeiros said. However, he also explained that the K-9 “plays really hard” and “sleeps really hard,” thus he didn’t mind taking the oath for his partner.

Despite the adorable K-9 “officially” sleeping through the whole ceremony, Lynch has high hopes for the puppy. Lynch said that before he joined as the town’s new chief, he had already thought of introducing a canine officer to the town. Thus, when Medeiros suggested bringing in a therapy dog, Lynch was all for it.

“I knew we had a winning formula for the town,” Lynch said at the ceremony. “I’m extremely proud. This is a very big day for the Bristol Police Department.”

“He is going to be a superstar in the Town of Bristol, I guarantee it,” he added.