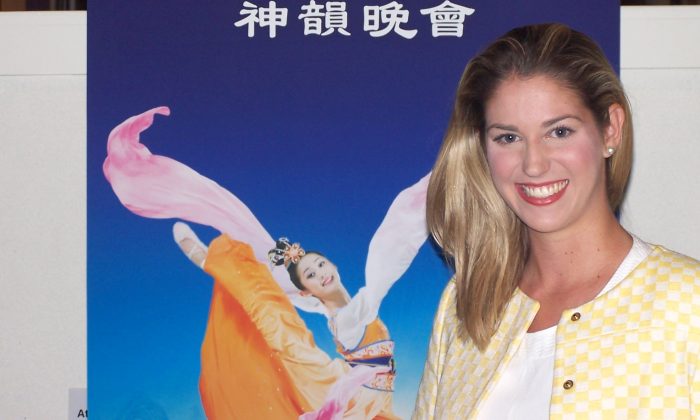 “I’ve never seen anything like it. The costumes are just beautiful, and the dancers are technically perfect–it’s breathtaking,” she said.

Nicole Rowles works for Channel 9 and NBN News, after completing a Bachelor of Journalism degree at The University of Queensland. Her background is in dancing, having represented Queensland in rhythmic gymnastics at 10, and later moving to Paris at 17 to dance with Moulin Rouge, before she returned to Australia to study.

“As a dancer, I really appreciate the years of training that must have gone into their work, and I can just see it in every movement they make. It’s absolutely flawless! Their technique, their togetherness, they’re just amazing dancers.”

Based in upstate New York, Shen Yun has classical Chinese dance at its heart, but also includes folk and ethnic dance.

The company’s website explains, “Classical Chinese dance has its own set of training methods in basic skills, and has strict training in both physical expression and specific postures. It also involves learning combinations of leaps, turns, flips, spins, and other aerial and tumbling techniques. It is a vast and independent system of dance.”

Shen Yun depicts traditional Chinese culture and values, as the website states: “Through the universal language of music and dance, Shen Yun weaves a wondrous tapestry of heavenly realms, ancient legends, and modern heroic tales, taking you on a journey through 5,000 years of Chinese culture. Its stunning beauty and tremendous energy leave audiences uplifted and inspired.”

The show brings ancient myths and legends, as well as contemporary stories to life on stage. One performance in particular touched Ms. Rowles heart.

“I feel like it’s the passion in the dancers and their conviction, and that really comes across, and that makes us feel as well as the audience … I could really relate to the story, and really feel it, and every sort of emotion on their face was just so real and so organic. It was beautiful.”

“The injustices that people experience now when they’re just trying to express themselves spiritually.”

Ms. Rowles shared her overall impression of Shen Yun. “It’s unlike anything you have ever seen before; it will take your breath away. It’s something that words can’t describe, but there’s so much colour and movement and beyond that there’s so much heart.”

“Every movement has a wealth of feeling and the entire cultural history behind it. It’s just so beautiful to watch.”