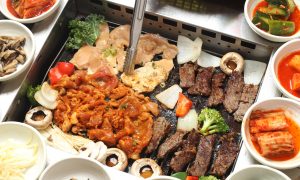 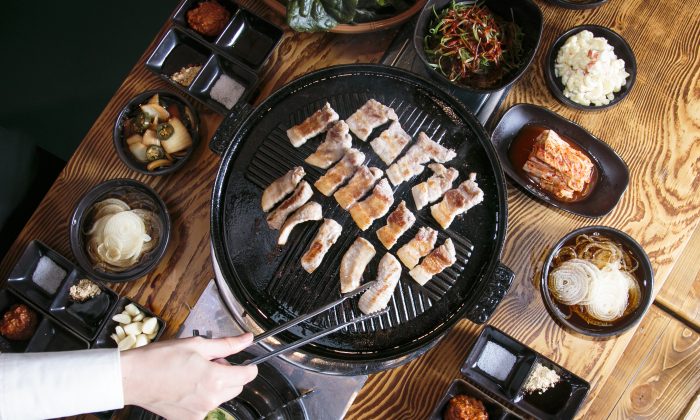 When Jongro BBQ opened at the end of last summer in Koreantown, it filled up immediately. Its asset: name recognition—by Koreans, that is.

A franchise that started in 2010, Jongro BBQ has been expanding up a storm, and is now setting its sights on America. Come on a weekend evening, and the wait list is more than 100 people deep.

Expect it to expand at a fast clip in the United States, where locations in the New York metro area alone are planned in Flushing (in March), and Bayside and Fort Lee (at the end of the year).

The draw: prime cuts of meat (raised on unprocessed feed and without antibiotics), fresh and cut to order, 30 percent less expensive than the competition in Koreatown.

Here in the United States, “no one was doing Korean barbecue right,” said Moul Kim, who oversees openings in North America. “[The meat] is frozen all the time. It’s marinated to death.”

At tables, waiters deftly cook up the meat on cast iron pans and copper grills. A beef platter, at $49.99 (marinated or not), is estimated to feed two to three people—depending on how heavy of a meat eater you are.

A platter offers cuts that are distinctly different, and unlike at a steakhouse, lets you appreciate each in its own uniqueness.

The American locations carry an item that their Korean counterparts don’t: beef.

The brisket is first to be submitted to the fire. Paper thin, it becomes melt-in-your-mouth delicious. The thin slices of short ribs (kalbi) come from center cut, the tenderest and most marbled spot—a cut Kim describes as going for $20–$24 per pound retail. “It’s a ridiculous cut,” he said. Its marbling, delicately spread throughout, in Korean alludes to snowflakes.

The brisket, short ribs, and skirt steak are all USDA Prime cuts of meat. As for the finale from the beef platter, the rib eye is USDA Choice, though Kim compares its quality to a high Choice or lower Prime quality. It is tender and to die for.

All the cuts are cut to order, which diners can see being done through a window with the red awning, marked Butcher Shop in Korean.

Because the emphasis is on the meat’s fresh and high quality, waiters encourage diners to try the non-marinated versions. “Once they try it, they never go back to marinated,” Kim said.

Marinating cuts for a day or two, Kim explained, is a way to tenderize meat that isn’t of such great quality.

You get your own personal tray of seasonings: Argentine rock salt, a sweet teriyaki sauce with a dab of ground soybean, and ssamjang, an earthy-spicy dipping sauce. Lettuce is there for the wrapping.

Not marinated, the meat tastes clean, though some diners used to the savory sweetness of Korean barbecue might prefer the version with the sauce (I personally did), out of expectation if nothing else.

The pork platter has some unusual offerings besides the delicious pork belly. The pork jowl in particular offers a unique chew and texture for the cavemen and cavewomen who prefer to sink their teeth into something substantial ($37.99). The pigs come from a farm whose location Kim won’t disclose—but like the beef, they are fed natural, unprocessed feed without antibiotics (in the case of the pigs, vegetables and soy).

As for the banchan, the array of small side dishes that come with Korean barbecue, these are less sumptuous and less abundant than in other restaurants. Still you do get a delicate, smooth cloud of an egg custard that stays warm on the second burner at the table. Other additions include a scallion salad, pickled onions, and a not very Korean macaroni salad.

If you want more, dishes such as soft tofu stew are available for affordable prices ($7.99).

The ambience is fun and casual, with heavy doses of retro vibes from South Korea of the ’70s and ’80s—working-class, casual, and approachable. Korean vintage movie posters adorn the wall including one of “Tarzan and the Lost Safari.” Korean pop from the ’90s predominate.

A few bottles of soju should ease you into another time and place quickly.

Private rooms (one for more than 30, the other for 20) welcome large parties, while the restaurant overall seats 250.

Calmer at lunch, Jongro BBQ is buzzing at dinnertime. Get there early to get a seat. On the weekends, it’s common to have over 100 people waiting at a time. In that case, hand over your cellphone number and you are free to leave, and you get a text when your table is ready.