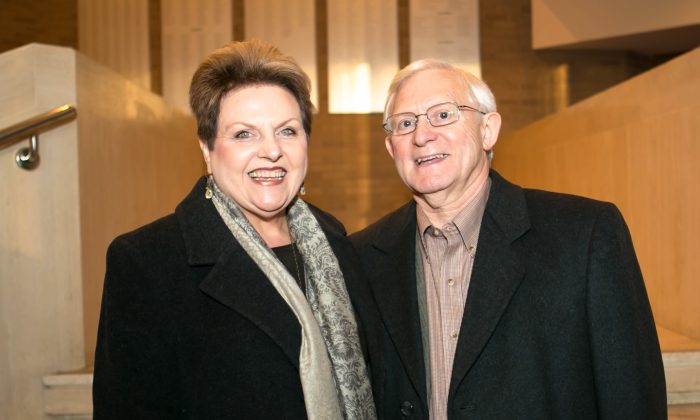 The venue was ideal for a performance that brought true Chinese culture to Baltimore, because of having presented shows of different flavor for close to 120 years.

According to the Shen Yun website, “A performance by Shen Yun is a presentation of traditional Chinese culture as it once was: a study in grace, wisdom, and the virtues distilled from the five millennia of Chinese civilization.”

Mr. Ken Countes, a musician and an engineer, and his wife Ms. Diane Countes, a jewelry designer and former teacher, were in the audience.

Ms. Countes said, “We loved it. I think it just touched every sense I have. I love color, and I fell in love with the costumes and coloring. Sometimes the performance took my breath away.”

She found the visual effect of the performance was “a study of color. This combined with the music and dancing was wonderful. I adored the entire show.”

On the spur of the moment she decided that “I intend to make watching this show a yearly thing, if they come back every year.”

Mr. Countes couldn’t agree more and said, “I was really impressed by the precision of the dancing, and I enjoyed the colors too. “

As he also is a musician he took great interest in the music. “The music was very interesting, especially because it was a blend of Chinese traditional and Western music.”

However, overall he said he was “floored by the precision of everything, the movements, the music, and the [pictures on the backdrop].”

According to the Shen Yun website, “Animated backdrops transport the audience to another world. Projected behind the dancers, the hi-tech images lift the stage and set it amidst blossoming landscapes, deep forests, Mongolian prairies, or celestial paradises.”

For Mr. Countes the message was that it “was very significant to get in touch with the culture again in the historical sense.”

The Countes family had just experienced illness, so the Shen Yun show “was a wonderful, joyful, uplifting experience, and that’s what you want when you see art,” said Ms. Countes.

She continued, “I think it really brought together some modern aspects too, the big film screen, and music, and combining a lot of different arts, which I think the young people will be interested in, because they’re so multi-facetted today.”