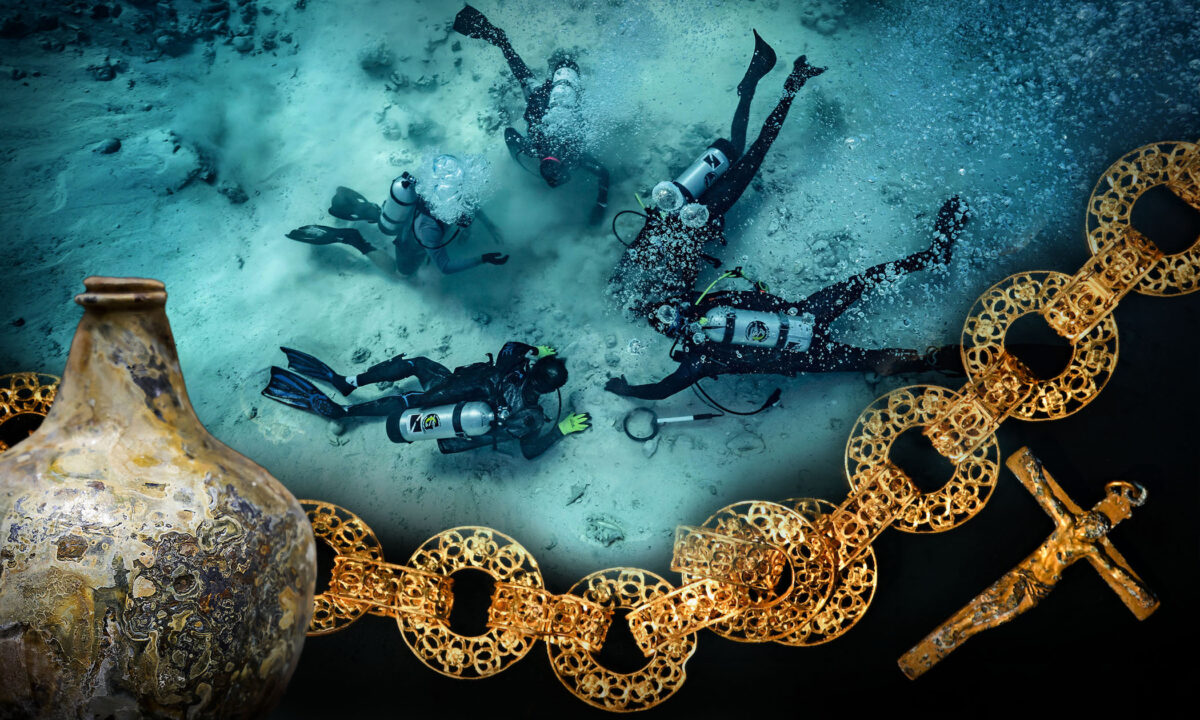 A museum on Grand Bahama is showcasing treasured artifacts retrieved from a 17th-century Spanish shipwreck in a first-ever, debut display. The singular, spectacular haul includes coins, porcelain, and jewelry which were once destined to wind up in the hands of knights or aristocrats.

Built around the salvaged remains of the sunken Nuestra Señora de las Maravillas, or Our Lady of Wonders, there is the Allen Exploration’s Bahamas Maritime Museum in Freeport. The two-deck, 891-ton Spanish galleon disappeared off the northern islands on Jan. 4, 1656, after colliding with its fleet flagship, then striking a reef and sinking.

The Tierra Firme fleet was en route home to Seville, Spain, from Havana, Cuba, when the galleon, laden with consignments royal and private, plus contraband, descended to her watery grave. She carried silver salvaged from the wreck of the Jesús María de la Limpia Concepción, which sank off the coast of Ecuador 18 months earlier.

Allen Exploration’s marine archaeologists and operations directors, with local divers, had been exploring the scattered remains and debris trail of the Maravillas for two years, covering a search area of 5 by 7.5 miles (8 by 12 kilometers). High-resolution magnetometers, side-scan sonar, and bathymetry analysis enabled them to remotely map 8,800 sunken objects.

They retrieved a gold filigree chain, handmade for a wealthy aristocrat, unlike anything pulled from a wrecked ship, plus four jeweled pendants bearing the cross of St. James, thought to have been worn by knights of Spain’s sacred Order of Santiago—whose religious warriors once protected pilgrims on the 500-mile (800-kilometer) march from the Pyrenees to Galicia.

“My breath caught in my throat,” he said in a statement. “The pendant mesmerizes me when I hold it and think about its history. How these tiny pendants survived in these harsh waters, and how we managed to find them, is the miracle of the Maravillas.”

The sunken ship has a turbulent history, he added, owing to heavy salvage from Spanish, English, French, Dutch, Bahamian, and American searches during the 17th and 18th centuries, plus sweeps in the 1970s through early ’90s. Modern exploratory technology nevertheless continues producing still more gems hidden under the waves and sand.

The salvage yielded coins minted in Mexico, a 75-pound silver bar, and a host of emeralds and amethysts mined in Colombia—omitted from the galleon’s manifest, thus attesting to the ship’s trafficking contraband; it wasn’t unusual for 17th-century galleons in Spanish America to hold as much as 20 percent contraband.

Project marine archaeologist James Sinclair said: “This isn’t just forensic marine archaeology; we’re also digging into former excavations, working out what previous salvage teams got up to, where, and why.

“The ship may have been obliterated by past salvage and hurricanes. There are no guarantees, but we’re convinced there are more stories out there.”

Besides exhuming lost booty, Allen Exploration samples biodiversity, seafloor geology, and plastic pollution to better understand development of Bahamian ecosystems. While probing missing pieces of the Maravillas, and her precious cargo, researchers found 18 more wrecks, with potentially thousands of others still lying in wait, spread across the region.

None of the treasure of the Maravillas will be sold. All are permanently on display at the Bahamas Maritime Museum for the public to marvel at.